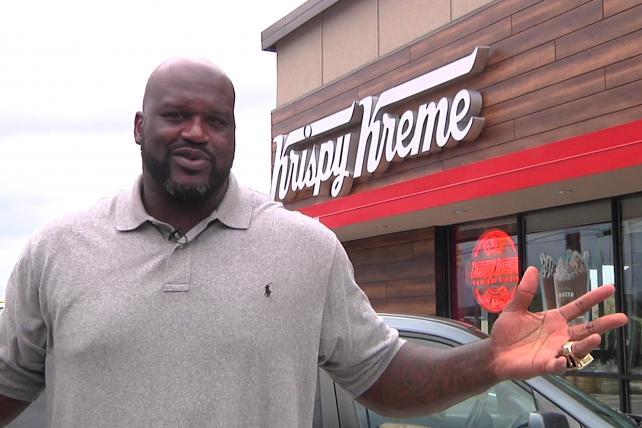 The retired NBA superstar, who is a big Krispy Kreme Doughnuts fan, is teaming up with the brand as a global spokesperson and franchise owner.

Mr. O'Neal, better known as Shaq, has become an owner in the Krispy Kreme shop on Ponce de Leon Ave. in Atlanta.

"In addition to Shaquille's status as a sports and entertainment icon and businessman, he is known for spreading joy, which aligns with our positioning and mission," Krispy Kreme President and CEO Tony Thompson said in a statement. "We are confident this partnership will have a big impact for us in Atlanta and around the world."

Krispy Kreme is not wasting any time tying into all things Shaq. From Oct. 28 through Oct. 31, people who tag Halloween social media posts with #ShaqOrTreat might win prizes including items autographed by Mr. O'Neal.

Krispy Kreme was acquired by privately-held JAB Holding Co. for $21 per share in July. Financial details of the chain's relationship were not shared with Ad Age.

Of course, this is not Mr. O'Neal's first time promoting restaurants. He worked with McDonald's, Taco Bell and Burger King years ago, among his many promotional roles over the years. And clearly Mr. O'Neal is not the only basketball star to get into the restaurant business. Michael Jordan's steakhouses quickly come to mind. Among others, LeBron James inked his deal with Blaze Pizza last year.

Before Shaq's deal was announced, he filmed some moments at a Krispy Kreme concept shop. While we have not seen videos of other new franchisees, we have a feeling few wear the chain's hat and dance in the kitchen quite like he does.