No, Mikey Isn't in Commercial, Which Urges Families to 'Enjoy All Of It'
READ THIS NEXT
Metrics marketers love most are usually the wrong ones, ANA study finds 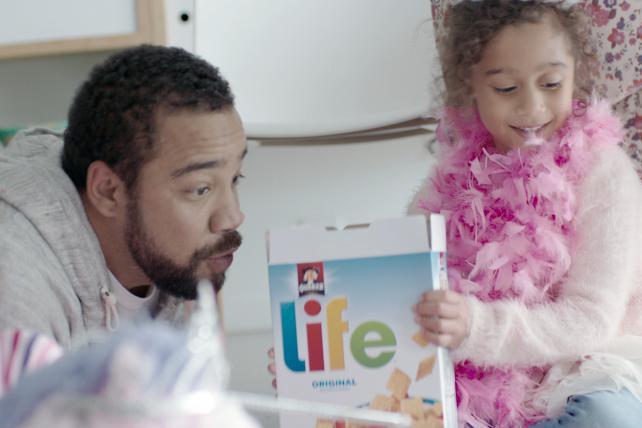 Life Cereal – Enjoy All Of It
Credit: Quaker Oats/PepsiCo

Life cereal will be back on air with its first TV campaign in nearly a decade as the brand tries to reconnect with today's busy families.

The cereal is also getting a new tagline, "Enjoy All of It," in a marketing push that comes as breakfast cereals in general try to win over diners who have a variety of options for their morning meals such as yogurt, bars and breakfast sandwiches.

"We feel really good that Life has a reason to compete in the marketplace and it does really fit into people's lives," said Quaker Ready-to-Eat Cereal Marketing Director Jessica Spaulding.

In the spot, families bop through everyday activities such as eating breakfast, grocery shopping and mowing the lawn with glee, backed by Flo Rida's song "That's What I Like."

The brand wants people to celebrate life's little moments, which, of course, include eating cereal.

"It's a great time to reintroduce this brand to the American public and really to the modern family," Ms. Spaulding said. "There's joy to be found in every moment, that's what we really centered our campaign around."

Before some people ask: No, Mikey from the 1970s campaign is nowhere to be seen. Quaker aired an FCB remake of the iconic "Mikey" ad in January 2000, featuring an older cast. In July 2000, it brought back the original "Mikey'' TV spot first aired in 1972 and created by DDB Worldwide predecessor Doyle Dane Bernbach, in which two brothers discover that their younger brother likes Life cereal. (Mikey, by the way, is really named John Gilchrist and went on to become a director of media sales, according to this 2012 Newsday article.)

The brand has moved on since then. The last time Life was on TV, Ms. Spaulding said, it was connected to a chocolate product that hit the market in 2007. There are two new flavors to promote now, but they don't appear in the TV spot. A vanilla cereal is out now and a limited-time pumpkin spice variety will be in stores soon. Still, the spot is meant to speak about the broader brand.

The flavors will be featured in a digital push. Life is getting a life of its own online, with a dedicated brand page on Facebook and a landing page as part of the Quaker Oats site set to go live in late August. The brand's colorful logo is also getting a bit of an update early next year, Ms. Spaulding said.

Life worked with Mono in Minneapolis on creative, with OMD as its media agency. Parent company PepsiCo has worked with Mono before, but it is the first time Life is working with the agency.

The TV commercial is set to air on cable networks such as Bravo, Food Network, HGTV and TBS from Aug. 23 through Nov. 13.

Ms. Spaulding declined to share financial details but said spending on this campaign is about half of Quaker's ready-to-eat marketing budget.

"We'll continue to make this brand a priority," she said.