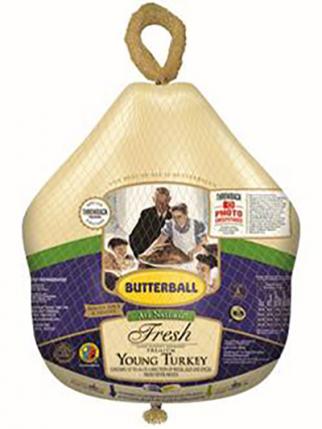 Butterball is bringing new meaning to #TBT with a famous Thanksgiving throwback. For the first time, the brand is using special seasonal packaging for its fresh turkeys. A print of Norman Rockwell's famous "Thanksgiving" painting from the 1940s will be featured on the front of fresh turkey packages beginning in early November. The Rockwell portrait ties into Butterball's "Throwback Thanksgiving" push, which will have the brand asking people to share nostalgic Thanksgiving moments during the season.

Now to a more immediate holiday -- Halloween. Influenster, a product review site, recently published a report revealing what it says are America's most popular Halloween candies by state. It used aggregated candy ratings and polling of more than 40,000 users. Reese's Peanut Butter Cup gained the most votes, but there were some regional differences. Hawaiians favored 100 Grand Bar, Almond Joy is popular in Vermont, and people in Massachusetts prefer Starburst. The only candies that got votes in all 50 states? Kit Kat, Butterfinger and Reese's Peanut Butter Cup. 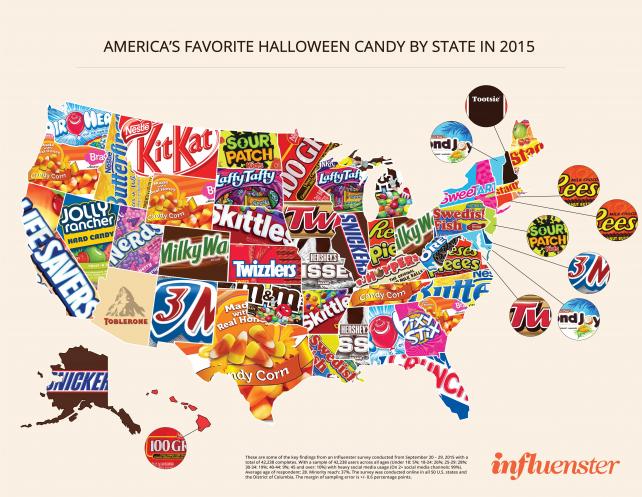 As Halloween arrives, so does the cold and flu season, which brings the launch of the Clorox Cold & Flu Pulse. The website debuted Tuesday in an effort to help people predict when germs are headed their way, as part of the brand's push to help people know when to stock up on disinfecting wipes. The website from Omnicom's Critical Mass uses social-intelligence tool Bottlenose and Twitter data to predict virality of actual virus, as opposed to marketing stuff.

The Pulse was launched in part based on a study conducted with Jonah Berger, author of "Contagious: Why Things Catch On." It found online flu conversations spike a week earlier than the number of confirmed flu cases from the Centers for Disease Control and Prevention. Also, an increase in conversation about exercise and staying late at work correlate with higher conversation about flu the following week -- so being good may be bad for you. Clorox appears to be filling the void from Kleenex, which in 2013 launched an online cold-flu predictor that's no longer operating.

The fall also means football -- and increasingly, stadium booze. When liquor giant Diageo inked a deal in 2002 sponsoring the Washington Redskins it was a big deal, marking the first time a spirits company sponsored an NFL team. But 13 years later, hard booze and sports stadiums are mixing about as frequently as gin and tonic. The latest deal comes from the New York Giants, which this week announced a sponsorship deal with International Spirit and Beverage Group, maker of Besado Tequila and Cavoda Vodka. The pact includes the opening of Club Cavoda at MetLife Stadium. Other recent NFL-booze deals include a multi-year agreement made by Deep Eddy Vodka with the Atlanta Falcons. The team is selling the vodka at stadium concession bars, mobile bars, and in luxury suites. 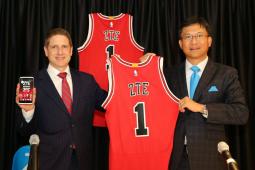 In other sports marketing news, smartphone supplier ZTE has struck a deal making it the official smartphone of the Chicago Bulls. The announcement was made during the Bulls' season opener on Tuesday -- a game attended by Barack Obama. ZTE is the fourth largest smartphone supplier in the U.S. with 8% market share, according to reports citing International Data Corporation figures, although it's likely a lot of people have never heard of them. The company is well aware of that issue and has been increasing its efforts -- and marketing spend -- to increase brand awareness. The Bulls are the fifth NBA team ZTE has partnered with since entering the U.S. market seven years ago. ZTE provides smartphones that include many of the features most high-end devices have but at a lower price point. ZTE USA CEO Lixin Cheng told Ad Age the company is looking to further increase its marketing spend over the next few years in an effort to dethrone No. 3 smartphone provider LG.

Here is an eye-opening statistic: Women receive less than 5% of venture-capital funding, according to a 2014 Babson University study, despite female-led tech companies averaging 12% higher revenue and 35% higher return on investment than male-led ones.

That disparity is at the heart of L'Oreal USA's annual Next Generation Award program. This year three female-founded tech startups will present to 450 L'Oreal marketers at an Inspiration Day marketing conference next month. One will be selected via "American Idol Live" style voting for a guaranteed pilot project, said Rachel Weiss, VP-digital innovation and entrepreneurship. The winners also get access to mentors who include venture capitalists and fellow entrepreneurs. This year's group includes Cast Beauty, founded by Sian Morson, which has a mobile app that uses weather data to provide personalized skin and hair-care recommendations; Maven, founded by Katherine Ryder, a platform for women to get better health information and services through a network of providers who offer video appointments; and MikMak, founded by Rachel Tipograph, a mobile video shopping network for iOS devices that allows instant ordering of beauty and other items priced below $100.

Turning to the world of food activism, some well-known brands are facing some fresh attacks. First up, some consumer and environmental groups want General Mills to support mandatory FDA labeling of genetically modified organisms, better known as GMOs. In a statement issued Oct. 25, the 14 groups backing the "Conceal or Reveal" campaign called on the cereal maker to stop funding what they call "anti-food labeling efforts." It's not the first time General Mills labeling has come under attack. The company stood by its position on GMOs, which includes supporting a national standard for labeling non-GMO products. The group that posted the public letter to General Mills CEO Ken Powell said "additional activities and events directed at General Mills will be launched in the coming weeks." Meanwhile, a growing group of consumers wants Taco Bell to follow the lead of many of its fast-food rivals and begin serving only cage-free eggs. A Change.org petition on the issue had more than 98,500 signatures by Tuesday afternoon. The push comes after McDonald's in September issued a decade-long timeline for its full transition to serving only cage-free eggs in the U.S. and Canada. Liz Matthews, Taco Bell's chief food innovation officer, said "we're continuing to explore many of our quality ingredients ­including our egg supply ­and work closely with our suppliers to determine what options are available and make sense for our business."

Finally, Mondelez International announced some management changes Wednesday. Mark Clouse, 47, gets the newly created role of chief commercial officer in January, while Tim Cofer, 46, will take over Mr. Clouse's role of chief growth officer. Mr. Clouse was named Mondelez's first chief growth officer in 2014. As chief commercial officer, Mr. Clouse will have oversight of all five geographic regions and the global sales function. Corporate strategy, global categories and global marketing, research, development and quality will report to Mr. Cofer. Other changes include the planned retirement of Dave Brearton, EVP-strategic initiatives, at the end of 2015; and the departure of Tracey Belcourt, EVP-strategy. Mr. Brearton has more than 30 years with Mondelez and its predecessor, having joined Kraft Canada in 1984 as a financial analyst. Ms. Belcourt, who joined the company in 2012, was responsible for corporate strategy and M&A.