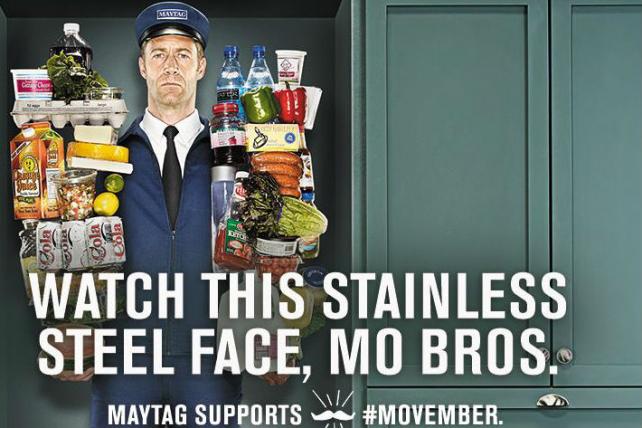 Marketers have completed the pink breast cancer awareness promotions of October, but now it's officially Movember, which means lots of brands doing promotions around mustaches to help raise money for "men's health." The Maytag Man this year gets in on the act, growing a mustache to raise $15,000 for the Movember Foundation and to encourage people to visit him on social media to watch it grow. Georgia-Pacific put a giant mustache on its Atlanta headquarters. Even Dollar Beard Club has gotten in on the act, encouraging men to "End Beard Oppression" and grow the whole beard, not just the mustache.

Fall isn't just about pink ribbons and mustaches for men's health. It's also about shelter cats. Clorox Co.'s Fresh Step is launching year two of its Million Meow Mission, in which it will give up to a million scoops of free cat litter to shelters based on activity in its Paw Points loyalty program. It's also preparing for the fourth annual Catdance Film Festival in Park City, Utah, this January -- a festival for videos about shelter cats – with the release of this one about Bosley, a cat who defied expectations by living a year in "fospice" (that's foster hospice) care. Prepare to weep.

Hormel and BBDO Minneapolis are staging a one-night-only Black Label Bacon Strip Show on Nov. 6 in Las Vegas with acrobats, music and "bacon burlesque dancers" named after four varieties of Hormel Black Label -- cherrywood, pecanwood, brown sugar and jalapeño. It's being touted as a Broadway-level production and is the brand's latest effort after 2013's first International Bacon Film Festival and last year's "Bacon-Fueled Motorcycle" and follow-up film festival. The pitch is that bacon fans' demands for bacon-infused content are only escalating. "Three years ago something like an extreme bacon recipe would satisfy that craving," BBDO Minneapolis Account Director Scott Schraufnagel said. BBDO Minneapolis Executive Creative Director Noel Haan called the show "more of a sensorial kind of experience that matches the brand." Hormel's not the only one thinking outside the package. Oscar Mayer's efforts include the "Sizzl" dating app and a bacon-scented iPhone alarm. And for those who can't make it to Vegas, there will be a livestream.

Whoever said coloring books were just for kids hasn't been paying enough attention to the latest trend in relaxation activities. Adult coloring books are all the rage, and now Barnes & Noble wants in on the action. On Nov. 14, the chain will host its first "All-American Art Unwind" event, where grown-up shoppers can visit special coloring stations at their local Barnes & Noble stores and shade away. The initiative will feature the work of author and illustrator Mille Marotta, who has sold over four million adult coloring books. Break out the Crayolas.

Onto more upscale art: Absolut's new premium vodka brand Elyx will be plugged as part of a tour that will make a stop in Miami during Art Basel, an art show that draw international galleries. Elyx is stopping by as part of a three-city "pop-up water truck" tour. The truck will sell limited edition copper pineapple cocktail servers, as shown in the video below. For every copper pineapple sold, Elyx will donate one month of water (560 liters) to someone in need as part of a partnership with Water For People, a nonprofit that provides access to safe water in developing countries.

Following a successful holiday partnership in 2013, American Express OPEN is again sponsoring a store at Story, the Manhattan-based concept shop that changes its inventory, decor and message every four to six weeks. Featuring installations from Home Depot, a strategic partner, the 2,000-square-foot shop will be open from Nov. 4 through Jan. 3 and offer 2,400 products -- such as stay-on mittens for kids -- from over 300 small businesses. Unlike traditional retailers, four-year-old Story gets most of its revenue from sponsorships, which start at $400,000. AmEx follows in the footsteps of Target, which was Story's holiday sponsor last year. 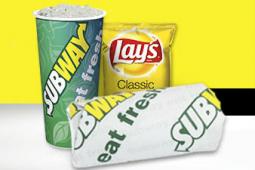 Finally, Subway Canada is switching teams. The sandwich chain said Wednesday it tapped PepsiCo Canada as its new exclusive provider of beverages and snacks, replacing Coca Cola. Coca Cola remains Subway's U.S. partner. When asked whether the drink change meant potential switches elsewhere, Subway said each market makes a determination on how best to serve its customers. Subway said Pepsi Spire touchscreen drink systems are being installed in Canada to give patrons more customization options. The duo will also work on promotional opportunities with sports leagues including the NHL. In a statement, Kathleen Bell, director of national marketing-Subway Restaurants Canada, called it a perfect combination for Canada's largest sandwich chain and Pepsi, the country's "favourite" cola choice. The chain, which previously served Coca-Cola drinks, was already selling PepsiCo's Frito-Lay snacks. Beverage Digest had reported the possibility of the switch in late September.