Oprah is in this week's edition of Marketer's Brief. Need we say more? We also have news on Dunkin' Donuts -- or is it just Dunkin'? -- as well as how one packaged goods marketer is trying to get young people to spend less time on their phones, and more time using condoms. But first, let's crack open a beer, a very fruity one … 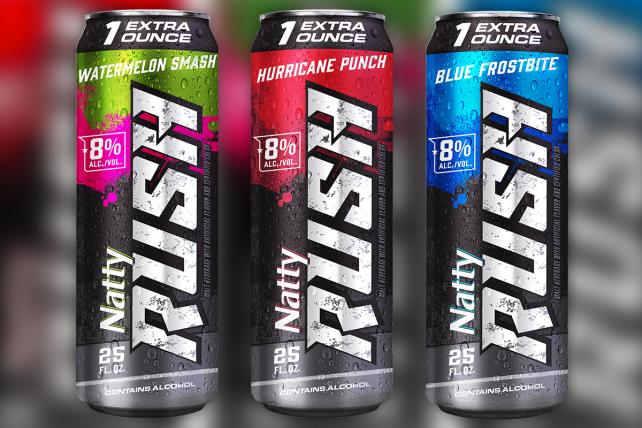 This will get you watermelon smashed
Four Loko, meet Natty Rush, Anheuser-Busch InBev's new entry into the fruity, boozy malt beverage market. The Natural Light line extension checks in at 8% alcohol-by-volume, which does not pack quite the same punch as Four Loko, whose flavors such as grape, mango, peach and sour apple range from 12% to 14% ABV. Natty Rush arrives in the fall, an AB InBev spokesman confirmed. Flavors include hurricane punch, watermelon smash and blue frostbite.

Beer Marketer's Insights first reported on Natty Rush last week, noting that AB InBev is planning a 12% ABV version for test markets. The beverage, available in single serve, is an economy brand -- unlike the brewer's higher end Bud Light Lime-A-Rita flavored malt beverages, whose sales have struggled. Beer Business Daily predicted that Natty Rush will "crush it" in convenience stores, because it is in the wheelhouse of c-store shoppers. AB InBev is also stepping up its investment in regular Natty Light with a new TV ad that continues its attack on Miller Lite. The spot, by Zeno Group, marks Natty's return to TV after an eight-year absence.

Biggest Buyers of Sunscreen? Sunny Washington, D.C.
You'd expect a more tropical place like West Palm Beach, Fla. But residents of Washington, D.C. are the biggest per capita buyers of sunscreen online, according to tracking firm 1010data. Maybe, despite January's regime change, they're more attuned to global warming or depletion of the ozone layer. Maybe they've just seen too much of the trouble tanning beds can cause. Nationwide, the firm also found online searches for sunscreen rose 23% in the first half of this year vs. year ago, with total online sales reaching $60 million. High-end EltaMD was the top online brand, followed by Johnson & Johnson's Neutrogena and L'Oreal's La Roche-Posay.

Beyond P&G, CPG Still Loves Digital
Procter & Gamble Co. had some unkind words for the digital medium when it slightly beat sales expectations despite cutting around $140 million in digital. But other packaged-goods players are still on the digital bandwagon, with Clorox Chairman-CEO Benno Dorer noting Aug. 3 that his company had increased the digital portion of its ad spending to 45% from 41% for the just-completed fiscal year. Church & Dwight Co. CEO Matthew Farrell the same day noted a very specific objective for online ads behind a new condom: "We're focusing Xoxo and our Trojan advertising on digital to try to get the young people to spend less time on their phones and more time using Trojan condoms."

Simon says chatbot
Good news for anyone who's ever been lost at the mall and in need of a restroom. At a time when consumers are fleeing shopping centers, Simon Property Group is trying a new tactic to get them back. The mall operator debuted its first chatbot concierge on Facebook Messenger this week, serving up helpful information on locations, events, promotions and amenities. The Indianapolis-based company, which worked with AI marketing platform Snaps, will offer a unique bot at each of its 208 properties.

When it comes to coffee, coffee drinkers run on … Starbucks
As Dunkin' Donuts' begins testing whether its name resonates without "Donuts," a new report shows the brand already has high brand health scores among the general population. When it comes to coffee drinkers, though, Starbucks reigns. Dunkin' Donuts, which has marketed itself with the "America Runs on Dunkin'" tagline for years, is opening one location in Pasadena, Calif., carrying just the name Dunkin'. While it's a departure for the doughnut and coffee chain, it's not abandoning doughnuts (or donuts). It's just that the chain wants to emphasize its drink lineup, as local paper the San Gabriel Valley Tribune reported late last month.

Dunkin' Donuts Purchase Consideration: Coffee Drinkers
"When you are in the market next to purchase food or drink, from which of the following would you consider purchasing?" Coffee drinkers equal all adults aged 18+ who drink coffee at least once per week.
Source: YouGov BrandIndex. August 2017. The scale is measured from 0 - 100%.

"By changing the name, they can expand to other menu options. It's smart, but I don't think it matters," Brand Keys President Robert Passikoff tells Ad Age. The signage shift may aim to broaden people's perceptions about the chain, but Dunkin' Donuts is already the top coffee chain in brand health among the general adult population, followed by Krispy Kreme and Starbucks, according to YouGov BrandIndex.

Starbucks, however, has the highest brand health metrics among coffee drinkers (defined as those who drink coffee at least once a week). And when coffee drinkers were polled about which of four chains they'd next plan to buy a food or beverage from -- Starbucks, Dunkin' Donuts, Krispy Kreme or Tim Hortons -- 65% chose Starbucks. Looking at the broader general adult population, Dunkin' Donuts and Starbucks are neck and neck in the lead. "These numbers imply that while coffee may be Starbucks' advantage, Dunkin Donuts' more general appeal helps it to close the gap," YouGov BrandIndex says.

Dunkin' Donuts Purchase Consideration: General Public
"When you are in the market next to purchase food or drink, from which of the following would you consider purchasing?" General public equal all adults aged 18+.
Source: YouGov BrandIndex. August 2017. The scale is measured from 0 - 100%.
Charts by Chen Wu.

Number You Need to Know
$100 million -- What Capital One reportedly will pay over 10 years for the naming rights to what used to be called the Verizon Center in Washington, D.C. As of today, it's Capital One Arena.

Would You Buy This?
Oprah Winfrey joins with Kraft Heinz for four refrigerated soups branded "O, That's Good!" such as Creamy Tomato Basil Soup with a twist of Celery and Carrots.

Also coming are four refrigerated side dishes (such as Garlic Mashed Potatoes with a TWIST of Cauliflower). Ten percent of profits from the items --- the soups are $4.99 each and the sides are $4.49 --- goes to charities aimed at eradicating hunger.

Happy #BookLoversDay from your banned book enthusiasts at the ACLU. pic.twitter.com/NpTBCRmFD6

Moves
Earlier this summer Jeff Jenkins was named chief marketing officer of CKE Restaurants, the parent company of Carl's Jr. and Hardee's. Now we know where CKE's prior CMO, Brad Haley, is headed. Haley becomes SVP and CMO at IHOP on Aug. 14, where he'll report to President Darren Rebelez. IHOP said Haley will oversee development of its menus, culinary pipeline, creative, social media, merchandising and public relations. He's also set to help the company as it further develops in- and away-from- restaurant dining and the overall guest experience.

Snyder's-Lance Inc. eliminated its CMO position this month as part of a broader reorganization, leading to the departure of SVP-CMO Rod Troni. "Mr. Troni's contributions to the Company's marketing initiatives are greatly appreciated and the Company wishes him success in his future endeavors," Snyder's-Lance said in a filing with the SEC.