Marketers of the Year No. 8: Greta Thunberg | Ad Age
Skip to main content

Marketers of the Year No. 8: Greta Thunberg

Cutting through rhetoric and platitudes, teenager is ideal messenger for the environmental movement
READ THIS NEXT
How COVID-19 is changing shopping behavior on a global scale 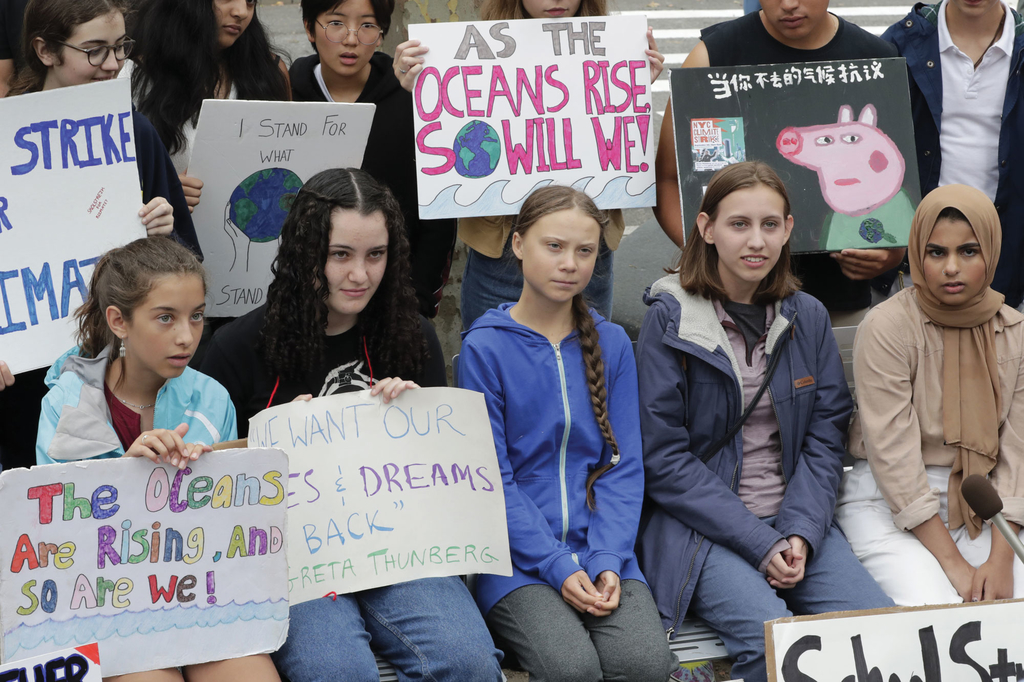 While only in high school, Greta Thunberg, center, has accomplished what few purpose-facing brands have been able to do—become a mobilizing force for climate change activism.

Standing before an assembly of world leaders in September, a Swedish teenager delivered a blistering critique of global inaction on the climate crisis. “You are failing us,” said Greta Thunberg, addressing the Climate Action Summit at United Nations headquarters in New York City. “But the young people are starting to understand your betrayal. The eyes of all future generations are upon you. And if you choose to fail us, I say, ‘We will never forgive you.’”

In the audience, cheers rose from representatives of many of the very nations the 16-year-old activist was calling out. That same week, between 4 and 6 million people in 150 countries participated in climate strikes around the world. Inspired by Thunberg’s lonely vigil in front of the parliament building in Stockholm a year prior, students rallied parents, teachers and concerned adults to take to the streets.

Images of Thunberg with a hand-lettered sign declaring a “school strike for the climate” had struck a chord with other young people alarmed by rising seas, extreme weather and the unrelenting increase of atmospheric carbon—the highest levels the Earth has seen in at least 3 million years, according to the World Meteorological Organization.

Thunberg isn’t a typical, or even intentional, marketer, but she drives attention and action in organic ways that purpose-led brands wish they could. A quarter of a million people gathered to hear her speak in Lower Manhattan, and the city gave students excused absences so they could attend, as did Boston and Chicago. Ben & Jerry's and Patagonia closed for the day.

She’s a newsmaker, so the media follows her every move. Earlier this year, Thunberg was nominated for the Nobel Peace Prize. In the weeks after she arrived in New York aboard an emission-free, solar-powered yacht, she fist-bumped former President Barack Obama and met with Canadian Prime Minister Justin Trudeau, who—in the middle of a hard-fought re-election campaign—declared, “I agree with her entirely. We need to do more,” and pledged to fund the planting of 2 billion trees.

Thunberg seems an ideal messenger for the movement. She has no apparent ulterior motive for speaking out and is obviously uncomfortable in crowds and onstage. But she speaks with a single-mindedness and clarity of purpose that cuts through the rhetoric and platitudes of leaders many times her age.

As testimony before the UN, Thunberg merely submitted the Intergovernmental Panel on Climate Change report that laid out the case for drastic reductions in carbon emissions. Her power comes not from detailed policy proposals, but from her unflinching willingness to say what people don’t want to hear. “You say you hear us and that you understand the urgency,” she told the UN. “But no matter how sad and angry I am, I do not want to believe that. Because if you really understood the situation and still kept on failing to act, then you would be evil. And that I refuse to believe.”

In October, she turned down an environmental award and approximately $50,000 in prize money, saying, “The climate movement does not need any more awards. What we need is for our politicians and the people in power [to] start to listen to the current, best available science.” And she admonished her home country for its new oil and natural gas projects.

In part, Thunberg credits her Asperger’s for her devotion to the cause and her ability to keep from getting sidetracked by attention and criticism. “Given the right circumstances, being different is a superpower” she tweeted.

Perhaps the most convincing evidence of her effectiveness is opposition from climate skeptics. Fox News’ Laura Ingraham compared her movement to the child-led cult from “Children of the Corn.” After her caustic speech at the UN, President Donald Trump, apparently threatened by the actions of a young girl—a turn of the tables if ever there was one—sarcastically tweeted: “She seems like a very happy young girl looking forward to a bright and wonderful future. So nice to see!”

Thunberg promptly changed her Twitter bio to reflect that taunt. It was the same kind of Gen Z social media savvy that birthed retorts like “OK, Boomer,” an expression of frustration with older generations that seem unwilling to change even in the face of empirical evidence.

In many ways, Thunberg is the latest inspiring teenager to hold a mirror to society and ask why it has to be this way. Like Malala Yousafzai—the outspoken activist for women’s education who was shot in the head by the Taliban at age 15—Thunberg is a clear, consistent voice in a media landscape filled with disinformation and invective. Indeed, she credits the students of Marjory Stoneman Douglas High School in Parkland, Florida, who have rallied behind gun control efforts, for motivating her own activism.

In a scant 16 months, Thunberg has galvanized public opinion worldwide and convinced people too young to vote that they can still influence their governments through direct action. Though she is only in high school, she has quickly become the most famous climate advocate since Al Gore. Whether she will be more successful in saving the planet remains to be seen—but the eyes of future generations are now upon her.