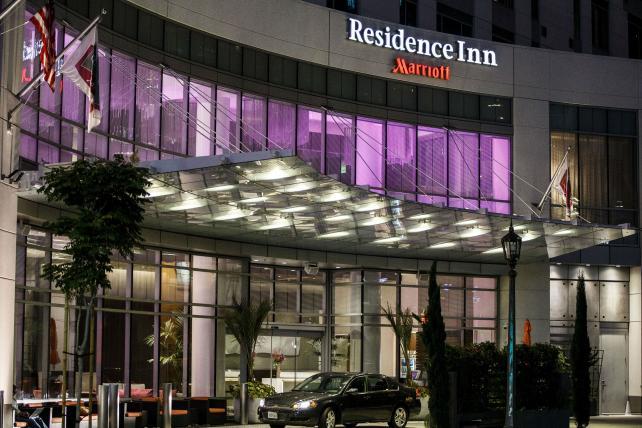 Marriott is paying $2 a share in cash and 0.92 of its own stock for Stamford, Conn.-based Starwood, the companies said in a statement on Monday. The new group will operate or franchise more than 5,500 hotels with 1.1 million rooms worldwide.

"This is an opportunity to create value by combining the distribution and strengths of Marriott andStarwood, enhancing our competitiveness in a quickly evolving marketplace," said Arne Sorenson, Marriott's president and chief executive officer. "Greater scale should offer a wider choice of brands to consumers, improve economics to owners and franchisees, increase unit growth and enhance long-term value to shareholders."

The deal is the largest takeover of a hotel company since Blackstone Group LP bought Hilton for $26 billion in 2007. Starwood has been exploring options including a sale since the February departure of longtime head Frits van Paasschen amid criticism he failed to increase the number of properties carrying Starwood's brands quickly enough. Starwood hired Lazard Ltd. to advise it in April. CEO Adam Aron has been leading Starwood on an interim basis.

At least three Chinese companies were pursuing bids for Starwood, according to a person with knowledge of the matter in October. CNBC reported on Oct. 28 that Hyatt was holding takeover talks with Starwood.

"The economies of scale really matter in the lodging business because higher volumes on the reservation system can drive business to less-occupied properties on a given night," said James Corl, a managing director at real estate private equity firm Siguler Guff & Co. "Reservation-system scale drives both occupancy and rate, and that helps cash flow and operating margins."

The hotel industry in the U.S. is in its sixth year of recovery from the recession and is facing supply surges in cities including New York and Seattle. In the Americas, revenue per available room -- a measure of profitability used by the lodging industry -- increased 6.6% this year through September, according to STR Global. Revpar rose 7.6% in Europe and 2.9% in the Middle East and Africa, while it fell 0.2% in the Asia-Pacific region, the lodging-research company said.