READ THIS NEXT
What marketers can learn from previous economic downturns
McDonald's $1 $2 $3 menu
Credit: McDonald's

McDonald's is adding yet another price-focused offer and giving local markets more say in advertising for the morning rush after its national value strategy and breakfast ads failed to increase visits to its restaurants.

McDonald's U.S. same-store sales increased 2.6 percent in the second quarter, marking the chain's slowest U.S. growth since the first quarter of 2017. Visits to U.S. McDonald's restaurants fell for the second consecutive quarter after rising 1 percent in 2017. Plus, the national introduction of fresh beef Quarter Pounder patties is slightly slowing down operations.

Although McDonald's profit and revenue exceeded analysts' expectations, its shares fell about 1.7 percent on Thursday, when the results were issued. Much of the blame in the U.S., executives said on the company's quarterly call, stemmed from its value positioning.

"It's the meal deal element where we think we need to be more competitive," CEO Steve Easterbrook said Thursday.

McDonald's introduced its $1 $2 $3 Dollar Menu in January with a heavy dose of ads from We Are Unlimited. Rotating some of the items on that menu and allowing local markets to make some swaps were discussed on Thursday's call. The menu, Chief Financial Officer Kevin Ozan said, is attracting "budget basic value customers," but McDonald's needs "to better meet the expectations of these deal customers and give them reasons to visit us more frequently."

A new 2 for $5 mix-and-match deal, he said, will launch in early August and feature some of its "iconic" sandwiches. McDonald's already ran a 2 for $4 national offer on breakfast sandwiches for several weeks beginning in mid-March.

"We must be competitive on value," Ozan said. "We don't strive to win on value but we won't lose, either."

A change was announced in the company's advertising as well. McDonald's, which has long advertised at both the national and local levels, had more recently emphasized national deals while reducing its number of co-ops and agencies. (McDonald's had gone from 180 co-ops down to 56, and from 44 local marketing agencies to five, and reduced the amount restaurants contribute to marketing, Easterbrook said.) During the call, executives acknowledged the need for localized advertising, especially for the breakfast rush.

"Are we running at peak performance year-to-date in terms of just the effectiveness and efficiency of our marketing? Probably not," Easterbrook said. "There's no plans to change the marketing contribution, it's just what we do with it."

Local markets, for instance, might start highlighting specific breakfast items in local ads. Biscuits, for example, do better in the south than in some other parts of the country. 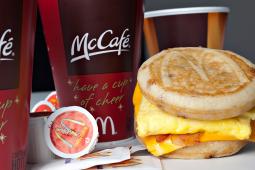 A McDonald's Corp. McGriddle breakfast sandwich is displayed with McCafe coffee for a photograph in New York, U.S., on Friday, Jan. 22, 2010.

McDonald's isn't the only company looking for fresh ways to bring in more diners. On Thursday, Dunkin' Donuts posted its ninth consecutive quarterly decline in traffic at U.S. locations. Dunkin's U.S. same-store sales rose 1.4 percent in the second quarter, driven by an increase in the average spent per transaction, with growth in sales of breakfast sandwiches and frozen drinks. Dunkin's been hyping its Go2 value play, which offers a mix of products at two for $2, $3 or $5.

And Wendy's, home of the 4 for $4 meal deal, came out with a limited-time $1 buffalo ranch crispy chicken sandwich in late June to compete against the $1 classic chicken sandwich at McDonald's.

The national rollout of McDonald's fresh beef Quarter Pounder patties in May has been a hit, executives said on the call, but slowed operations by a few seconds, particularly in the drive-thru lanes where the Golden Arches does the majority of its business. While a few seconds might sound minor, it can add up to a lot at a chain like McDonald's, where speed is critical.

McDonald's continues to tinker with its mobile app. In mid-July, it began asking app users to vote on the next day's breakfast offer in a "Deals on the Rise" promotion, one of several concurrent deals running on the app.