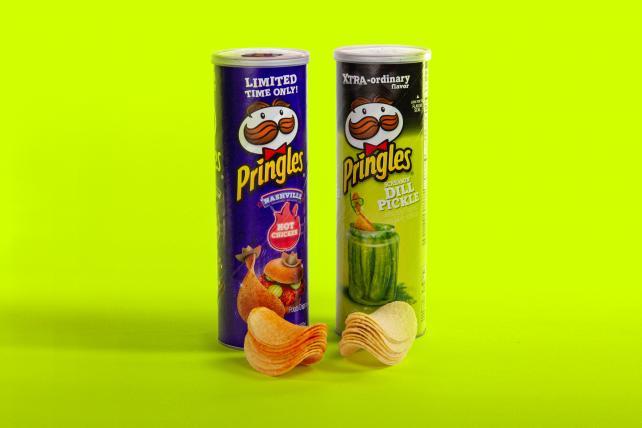 The fried-meets-spicy flavor of Nashville hot chicken, which has been growing in popularity, has made its way into a line of Pringles.

Pringles with Nashville Hot Chicken flavor, the latest limited-edition variety from Kellogg Co., will be sold exclusively at Dollar General.

For anyone unfamiliar with Nashville hot chicken, there are plenty of deep dives out there explaining it, including Eater's "hotchickenfrication" history lesson from 2017. As the story goes, the dish started in the 1930s when the jealous girlfriend of a man named Thornton Prince secretly added a lot of extra heat to his fried chicken using peppers and spices. He enjoyed it, which was not the reaction she'd wanted, and worked to recreate the dish. He then opened Prince's Hot Chicken Shack in Nashville, which is still open today. (Dollar General, by the way, has its headquarters not too far away, in Goodlettsville, Tennessee.)

As for those new Pringles, they don't actually contain chicken. Artificially flavored, they get their little bit of heat from ingredients including onion powder, hot sauce (made with aged cayenne red pepper, vinegar, salt and garlic), chili pepper and garlic powder. The crisps hit Dollar General stores in July with a suggested price of $1.50 per can. They follow last summer's Dollar General limited-time exclusive Pringles variety, which, in case you've forgotten, was Nissin Top Ramen Chicken flavored (it didn't have chicken in it, either).

Pringles' latest flavor push continues its suggestion that consumers stack different varieties, specifically suggesting that its new Nashville Hot Chicken crisps be stacked with its Screamin' Dill Pickle ones (and hey, some Original flavor chips, too).

Year-over-year sales growth for Pringles improved significantly over the last quarter, Bernstein analyst Alexia Howard wrote in a research note last week. She said the trend "could be relatively short-lived following the brand's first Super Bowl commercial in February," and noted that pricing is down sharply over the past quarter, "presumably due to higher promotional activity."

Restaurants nationwide hawk their own takes on Nashville hot chicken. It's been a success for KFC, which touted itself as the first national quick-service restaurant to offer the flavor (starting in early 2016). Later that year, Vincent Kartheiser played the Nashville Hot colonel in ads and then Fred Armisen wrote, produced and performed for a two-song KFC record about the dish.

Even putting the flavor into a potato snack is not a brand-new idea. Kroger has its own variety of Nashville Style Kettle Cooked Hot Chicken Potato Chips. And in 2017, Nashville Hot Chicken was a semifinalist in the Lay's "Do Us a Flavor" contest.