Old Navy is highlighting its improved activewear collection, in an effort to bring new shoppers into the fold. The retailer is rolling out a new campaign today to establish itself as a credible performance brand while keeping the playful spirit Old Navy is known for.

The move is part of an effort to lure shoppers who have not been swayed by Old Navy's recent efforts to spruce up its offerings and don't think of the brand as a fashion destination.

"A lot of people still have the perception that Old Navy doesn't make the most fashionable clothes because for a while we didn't," said CMO Ivan Wicksteed. "If you don't walk through the front door because you're looking for fashion, maybe you'll walk in looking for active."

And once they're in the store, Mr. Wicksteed hopes Old Navy's evolving product line will keep consumers coming back.

The activewear styles, branded as "Built for Play," will move to the front of the store with a unique visual identity that is meant to distinguish the collection as a sub-brand within Old Navy. The positioning emphasizes the collection's performance, while the focus on "play" differentiates it from high-performance competitors like Nike, Adidas and Under Armour.

"We're trying to establish performance credibility in the space through an Old Navy lens," said Mr. Wicksteed. "That means being much more democratic and inclusive and fun and conversational than [competitors] would be. If Nike or Adidas or Reebok were doing this, they would take themselves a lot more seriously."

Active will be a big focus for Old Navy throughout 2015, said Mr. Wicksteed. "I don't think there's going to be another push as significant for us this year," he added.

The retailer will begin airing a new TV spot today, called "Built for Summer," which is reminiscent of a Nike or Adidas ad. It features a mix of men, women and children running, weightlifting and boxing, as well as playing games like frisbee and volleyball. They're sporting styles that are more playful than what you'd expect from competitors, with brighter colors and words like "clutch" and "no guts no glory" emblazoned across the chest. The spot, created by freelancer James Spindler, ends with the tagline: "Built for Play."

Old Navy introduced the new active line and sub-brand positioning with a spot that broke in April.

Social and experiential elements are also commanding a larger share of Old Navy's marketing budget as the brand continues to shift ad dollars away from TV, Mr. Wicksteed said. "We really believe in creating experiences on the ground that make people want to talk about [the brand]," he said. "A lot of what we're doing happens in social media and events." 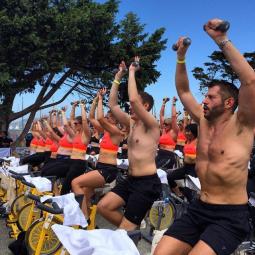 Old Navy worked with Dare to Bare to promote its sports bra line.

For this push, Old Navy paired with Women's Health to promote its activewear with a workout-video series that will run online. The retailer also linked up with Dare to Bare to launch its sports bra collection with events in San Francisco and New York that promote a healthy body image by encouraging women to participate in fitness classes in their sports bras. The brand is also tapping fitness bloggers to push product performance.

Old Navy ventured into the active space in 2011 to capitalize on the expanding category, and tapped former Nike exec Jill Stanton in 2012 as its exec VP-product design and development.

"Active as a category is exploding in the U.S., " said Mr. Wicksteed, who previously oversaw marketing for the Nike-owned Cole Haan and Converse brands. "There's a lot of opportunity for us to grow. … And [Jill] has built a really strong team of people underneath her who are designing amazing product."

Running, training and yoga are the focus of the new active collection. And the retailer is designing more innovative apparel with features like "go-dry" technology, which wicks moisture from the body. The campaign is pushing the new technology, but it will take a backseat to the "Built for Play" messaging, Mr. Wicksteed said.

Parent Gap, Inc. has dabbled in the active space both with its namesake brand and the active brand Athleta. But those brands cater to different audiences than Old Navy, and Mr. Wicksteed said he doesn't expect to compete with them for shoppers. Athleta, in particular, specializes in athletic products at higher price-points.