Adam Silver during the 2019 NBA Draft

The National Basketball Association has hired Twitch chief marketing officer Kate Jhaveri as its next CMO, replacing Pam El, who retired at the end of last year.

Jhaveri, who will start on Aug. 15, brings a wealth of digital experience to the social-media-savvy league, having previously served as head of consumer marketing at Twitter and head of brand marketing at Facebook. At Amazon-owned Twitch, the popular live video game streaming service, she oversaw a global team of 90 employees and is credited with helping to grow the platform’s audience to more than 15 million daily active viewers.

At the NBA she will report to Deputy Commissioner and Chief Operating Officer Mark Tatum. Her duties include overseeing global marketing for the NBA, the NBA G League and NBA 2K League, the NBA’s new esports league.

“Kate is an industry leader who has an excellent record in creating successful marketing strategies for some of the most renowned companies in the world,” Tatum stated in a press release. Said Jhaveri: “I am thrilled to join the NBA and bring my experiences in both digital and traditional marketing to develop new and innovative ways to continue the global growth of the league.” 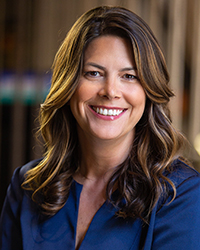 Jhaver joins the league after it experienced a drop in ratings for the NBA Finals on ABC between the Golden State Warriors and Toronto Raptors, which suffered from the loss of a stateside media market. It averaged 14.9 million viewers and an 8.8 HH rating, making it the least-watched, lowest-rated finals in 10 years. But the ratings drop is just a minor setback for the league, which remains a pop culture force, luring more interest from younger fans than other pro sports leagues.

AI-powered player training
The NBA on Wednesday separately announced a new partnership with Nex Team Inc., maker of HomeCourt, an app that uses machine learning to assist basketball players with training. Players can record themselves with a smartphone camera, and the app uses artificial intelligence to calculate shot accuracy, progress over time and other metrics such as speed, vertical jump, release time and ball handling.

With the new deal, HomeCourt will develop training drills in partnership with the NBA. “By giving players everywhere access to HomeCourt’s technology, the NBA has the opportunity to identify and discover basketball talent globally with just a mobile phone,” the league said in a statement.