Marketer's Brief: Nike's Kaepernick ad gets an 'A' (for fakes, spoofs and memes) | Ad Age
Skip to main content

Marketer's Brief: Nike's Kaepernick ad gets an 'A' (for fakes, spoofs and memes)

One sign of a successful ad campaign—or at least one that breaks through into pop culture—is that it spawns plenty of spoofs, knock-offs and false news that gets spread on social media. Nike's Colin Kaepernick has certainly cleared that bar. Tuesday we told you about the fake Ford/Kaepernick ad.

But also gaining traction is an image spreading on social media that is made to look like it comes from Nike, with the company urging people to donate their Nike shoes to their local VFW rather than burning them (which is what haters of the ad have been doing). A Nike spokeswoman confirmed to Ad Age that it's "totally fake." But plenty of people have fallen for it, including some high-level marketing execs, which have praised the statement on Facebook. 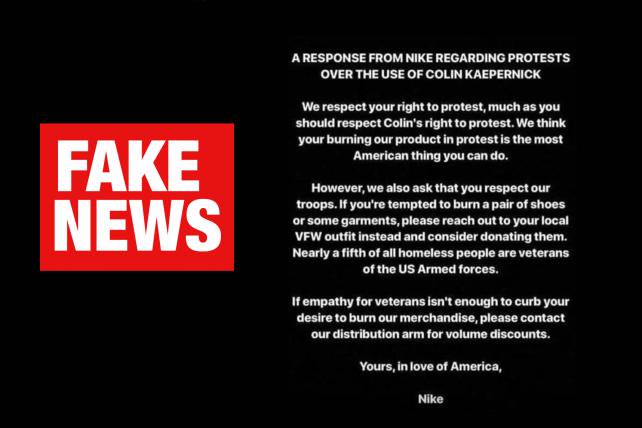 Meme of the year?

Meanwhile, Nike's real Kaepernick ad continues to be spoofed by people making jokes or expressing political views. The memes continue to fuel awareness for the original ad, which broke on Sept. 3. YouGov Plan & Track reports that 50% of U.S.consumers ages 18 and older report seeing an ad for Nike in the past two weeks. YouGov says that is the brand's highest ad awareness score since began tracking the metric in late 2012. Last week, Edison Trends reported that online sales of Nike products grew 31 percent from Sept. 2 to Sept. 4. But YouGov paints a different picture on sales, reporting that Nike's "purchase consideration" score—which gauges the percentage of U.S. shoppers ages 18 and older that are open to purchasing Nike goods—dropped from 43% to 31%.

Below, a sample of the Nike memes:

Who do I gotta talk to about nominating the "Believe in Something Kaepernick" meme for the meme of the year? #seriousquestion pic.twitter.com/GwECuLPYbI

#haiku
believe in something |
even if it means being |
made into a meme pic.twitter.com/Vaf4ZD9hnt

Procter & Gamble Co. drew flak from across the political spectrum for its portrayal of what it's like to grow up black in America in "The Talk"—from conservative critics, and from black directors concerned about the absence of fathers in the script. But Chief Brand Officer Marc Pritchard has long contended positive feedback outweighed the negative. And the awards keep pouring in. The video has won this year's Prime Time Commercial Emmy from the Academy of Television Arts & Sciences (though it started as an online video for P&G's My Black Is Beautiful program, it has subsequently run on primetime TV, most recently during ABC's "Blackish" in January, according to iSpot.tv). That follows the film's surprise Cannes Film Grand Prix in June, shared with P&G's "It's a Tide Ad" Super Bowl spots, which it beat out for the Emmy. BBDO, New York, created the ad in partnership with Egami Consulting Group, a multicultural shop.

Walmart advertising is mostly about winning shoppers. After that it's about improving corporate reputation, given its status as a lightning rod mainly for liberal critics and unions. Now the beast of Bentonville has a new critical audience—truck drivers. Walmart has enlisted Mono, Minneapolis, for a new campaign kicked off for National Truck Driver Appreciation Week (this is a real thing) showing the retailer does indeed appreciate them and would like to hire more.

A shortage of truck drivers, fueled by a tighter labor force and enforcement of stricter regulations, has driven up costs and made it harder for the country's biggest retailer to get deliveries on time, according to suppliers. Having taken over delivery of goods from most suppliers years ago, Walmart is on the hook for making it all work.

Women's workwear is having a moment and retailer Duluth Trading Company is taking advantage of it. The Belleville, Wisconsin-based retailer has a new brand campaign celebrating female woodworkers, farmers, ranchers and brewers with agency-of-record Planet Propaganda. Womenswear is a fast-growing segment for Duluth Holdings, which recently reported the category was up 37 percent year-over-year in the second quarter. On the earnings call, CEO Stephanie Pugliese said, "We remain very focused on building continued momentum in our women's line overall, not only for its sales potential but also because women are valuable customers." Good to know.

The two-year-old audio fitness app aims to answer that question by debuting its first TV commercial this week. Serving as an explainer, the 30-second video features CEO and Founder Ethan Agarwal walking viewers through how Aaptiv can answer their fitness needs with fresh content. Earlier this year, the New York-based company hooked up with R2C, the former media agency of competitor Peloton. Pure Growth handled the creative.

The key to loyalty

If it seems like people are constantly paying attention to the latest new gadgets and what to watch or buy on them, that's because they are. The top nine brands on Brand Keys 2018 "Loyalty Leaders" list have strong ties to technology. Amazon, Google and Apple all hold more than one spot in the top 20, showing their loyalty crosses into multiple categories. "If consumers use a brand's products or services in one category and exhibit high degrees of loyalty … they are six times more likely to use the brand's products and services in other categories," Brand Keys Founder and President Robert Passikoff said in a statement. Brand Keys, a loyalty and customer engagement research firm, says the findings come from 50,527 people, who assessed 84 categories and 761 brands this month. Below, the top five. (Numbers in parentheses indicate the 2017 rankings.) 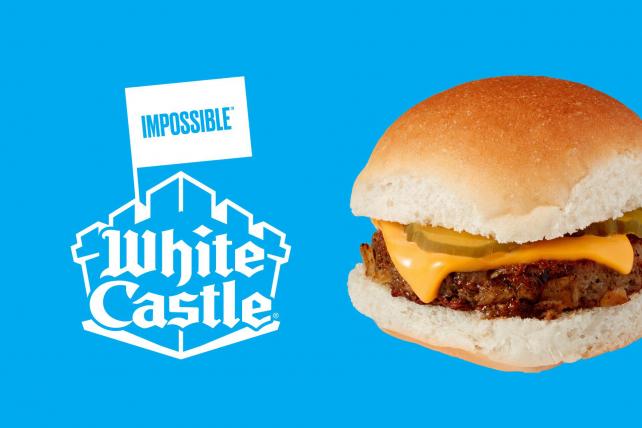 White Castle's Impossible Burger, made with ingredients including heme, wheat protein, potato protein and coconut oil, is now available at all all 377 White Castle restaurants in 13 states, after an earlier pilot in 140 locations.

15.5 percent: The growth in dollar sales of pumpkin-flavored products in 2018, according to Nielsen.