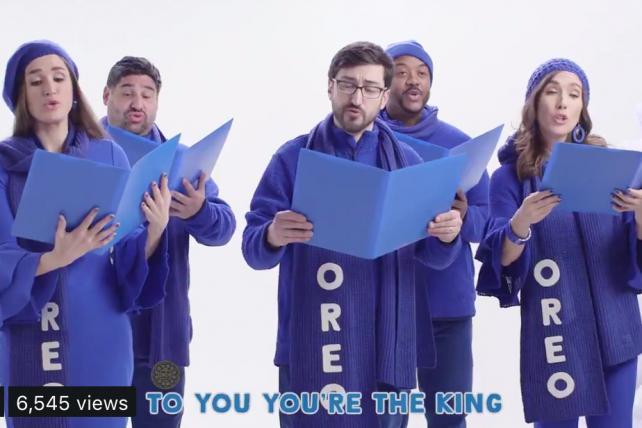 For Oreo, the holiday is about giving -- but it's also about receiving.

The cookie brand fired off tweets with videos showing carolers doing personalized riffs on "We Wish You a Merry Christmas" for six brands. The "We Wish You a Happy Holiday" songs are packed with the kinds of jokes perhaps only the brands being named, and their Twitter followers, will appreciate. The goal, of course, is to attract likes, retweets and attention to Oreo.

The tweets containing the videos and the #OreoCarol hashtag popped up on Dec. 20. They were sent to some buzzworthy people and brands including Burger King, BuzzFeed, Jonathan Adler, MoonPie, Wendy's, and, perhaps least surprisingly, Twitter.

Burger King's version included references to the chain's King character as well as the Oreo-flavored products it sells.

BK rival Wendy's, meanwhile, got props for its "fire Twitter" and is called a "savage ginger," before the Oreo carolers suggest dunking an Oreo instead of fries into a Wendy's Frosty.

Oreo said that while the initial outreach was planned, any responses are organic, by brand. (Ad Age was contacted to see whether the publication would like to participate in the project before it launched, but the publication declined.)

The carol aimed at Twitter itself included a plea to get the hashtag #OREOCarols trending (even though the brand itself was tweeting with the singular #OREOCarol). It went on to include a line that pretty much sums up the divisive atmosphere of social media: "Let's finally agree on something please, for once in our lives."

As of late Friday morning, neither #OREOCarols nor #OREOCarol appeared to be trending on Twitter.

The effort, which comes from 360i, is a cheerful yet purposeful way to stick Mondelez International's Oreo brand in people's minds. The carolers are decked out in blue outfits that match the main color on the cookie's packaging. And if that wasn't obvious enough, their tops include the brand name.

Here's MoonPie's version, along with that brand's response:

And here's Oreo's missive for BuzzFeed:

Oreo's song to Jonathan Adler asked the designer to rename some of his products to include (spoiler alert) the word Oreo.