The Party's Over: Bud Light Ends Campaign Amid Slow Sales 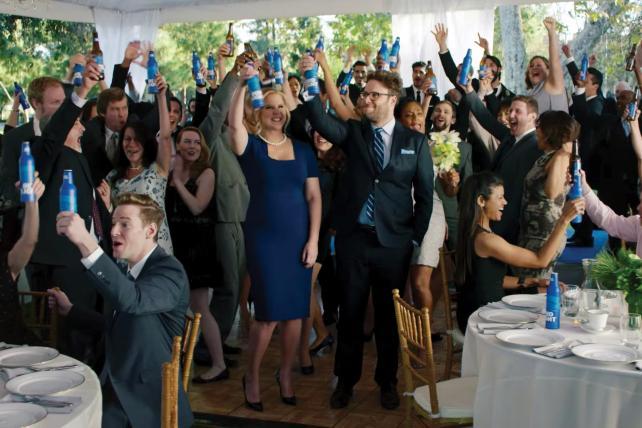 Almost exactly one year ago today, Anheuser-Busch InBev CEO Carlos Brito teased what he described on an earnings call as "revolutionary new creative" for Bud Light coming from Wieden & Kennedy, which had just won the nation's largest beer account from BBDO.

But the politically themed Bud Light Party campaign starring Seth Rogen and Amy Schumer, which debuted during the Super Bowl, has proven to be a major disappointment by failing to reverse declining sales trends. The brewer reported today that Bud Light sales to retailers fell by "mid-single digits" in the third quarter. The brand lost 0.65 points of market share in the third quarter. Year-to-date, Bud Light's market share is down by 0.50 points, the brewer estimated.

"Turning around the brand the size of Bud Light takes time," he added. "It requires discipline. We remain committed to improving its performance and our investing to reverse the negative trends and start 2017 with good momentum."

As it seeks to turn the page, the brewer has stopped running the Bud Light Party campaign, which was always intended to end in the fall, and is emphasizing its NFL-themed advertising, which includes dressing cans in team logos. The brand is also counting on Lady Gaga to boost sales. Bud Light is sponsoring the pop star's "dive bar tour," which includes TV ads and live streaming performances on Bud Light's Facebook page. The effort is driving "unheard of engagement levels for the brand," Lisa Weser, the brewer's senior director of marketing communications in the U.S., said in an emailed statement. She added that "first edition of the dive bar tour was the 4th most viewed show in the U.S. that day, combining all media for that day using Facebook Live as the medium."

So what went wrong with the the Bud Light Party campaign, which sought to capitalize on the buzz surrounding the Nov. 8 election?

For one thing, it was introduced with plenty of hype, which makes its disappointing returns more noticeable. "It has not been one of our better campaigns and AB will agree with that," one AB InBev distributor told Ad Age. "When we saw it a year ago we were all very excited, but it just has not worked out well."

"It was a very disappointing campaign," said another distributor. "If a campaign sells beer it doesn't matter if we like it or not as long as it works. But our trends are worse and worsening so there is a lot of concern about Bud Light."

The goal of the campaign was to inject more fun and comedy into Bud Light's marketing by giving light-hearted takes on hot-button issues. The mock Bud Light political party was positioned as a party for all. It followed BBDO's "Up for Whatever" campaign, which was mostly devoid of laughs as it featured larger-than-life experiences, like one spot that showed a man running through a life-sized Pac-Man maze.

"We are going back to where we used to be the best: Humor is a big statement for the brand again," AB InBev U.S. Marketing VP Jorn Socquet told reporters in January as the brewer showed off the Super Bowl ad that marked the beginning of the campaign. Bud Light Brand VP Alexander Lambrecht added that humor is what "made Bud Light a cultural icon over the decades, whether it was Spuds MacKenzie or 'Real Men of Genius.' "

The campaign seized on socially progressive issues as ads portrayed Bud Light's support of gay marriage and equal pay for women. In August, the brew ran an ad tackling another hot-button issue: transgender rights. "Gender identity -- it's really a spectrum and we don't need these labels," Amy Schumer said in the spot, as Mr. Rogen declared that "beer should have labels, not people."

But critics of the campaign said it failed where it matters most -- selling beer. "It's two levels removed from the consumers in terms of relevance," said former Anheuser-Busch Chief Creative Officer Bob Lachky. "People don't care about political parties at this stage of the game."

"It has nothing to do with selling beer," he added. "Immediately you are transporting the consumer into the Trump versus Hillary debate or any number of senate debates or gubernatorial debates that are going on right now across the country. It's totally into that generic wasteland of political advertising." As for Ms. Schumer and Mr. Rogen, he criticized their performance as "punking through scripts." He said "they are not connected and you can tell they are just mouthing off and taking the money."

Asked about the socially progressive nature of the campaign, one distributor said: "I don't have a problem with a brand being current and relevant and hip. We've got to attract new drinkers and certainly the millennials are more accepting of those variable lifestyles than the rest of the population. But I don't think you build your campaign around that. It's polarizing. And a brand as big as Bud Light needs to be all-inclusive."

Still, AB InBev won praise for its ads by some industry observers. The equal pay spot was one of six ads that in September earned a "#Femvertising Award" from SheKnows Media, a women's media company. The awards spotlight "brands and agencies that challenge unattainable beauty standards and gender stereotypes through pro-female advertising."

Ms. Weser cited "continued positive signs in brand health evolution, driven by millennials and Hispanics." The "Bud Light Party campaign helped us improve these brand attributes, but it did not translate to improved volume and share performance," she said. "While we are clearly not satisfied with Bud Light's performance, we are already leveraging what we've learned to develop and execute new work."

For the fourth quarter and for 2017, "we are working closely with our creative agency, Wieden & Kennedy, to prepare for the next phase of our campaign for the Super Bowl and beyond," Ms. Weser added. "We will also put more focus on sports, where we have had considerable success in the past."

But Bud Light faces industry headwinds that even the best beer marketing in the world might not be able to overcome. The brand controls a 17.62% share of the U.S. beer category, which is more than double the next largest brand, Coors Light, at 7.12%, according to September data from IRI, which does not include bar sales.

Brand size used to be a strength in beer. But that is no longer the case as drinkers sample the hundreds of new craft brands have been introduced in recent years. Craft brews, in most cases, rely on grassroots local marketing and use almost no TV ads or big sports sponsorships. That's a much different playbook that then one big beer brands have relied on for years.

"Bud Light is suffering from some systemc industry trends, which is overall pure consumption is down. Whenever you are the biggest by a factor of two or two-and-a-half, that is going to affect you disproportionately more than anyone else," said an ad agency executive who has experience on beer accounts.

"I think the beer industry overrates advertising and communications," this person added. "I have yet to see real proof that advertising alone has any real impact on changing consumer perceptions of beer."

Bud Light could also be facing competition from within AB InBev's own house via the hot-selling Michelob Ultra brand, whose sales volume was "up high teens" in the third quarter and is up more than 20% year-to-date, the brewer reported.

Both Bud Light and Ultra are easy-drinking light lagers, which puts them roughly in the same segment during an age when more hoppier, thicker beers are found on tap at bars across the country.

On the earnings call, Mr. Brito was quizzed about Ultra sales potentially cannibalizing Bud Light. He said "there is some cannibalization there," but added that Ultra is sold at a higher price point. So "it doesn't necessarily cannibalize the same occasion of Bud Light, and we're trying to do it in a way that both can find space to grow."