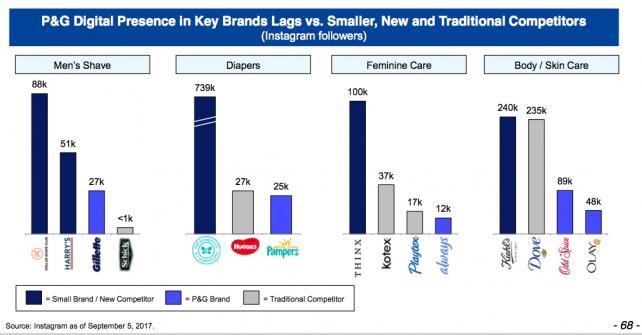 Procter & Gamble Co. needs to hire more outside digital talent because it's falling behind competitors, and it should shift focus from its huge billion-dollar brands to faster-growing small- and mid-size ones, according to a long-awaited white paper released late today by activist investor Nelson Peltz.

Peltz is vying for a P&G board seat at the company's annual meeting Oct. 10, and the company up to now has complained he's offered no specifics about his plans to improve the company. But in the 94-page white paper released today by his hedge fund, Trian Partners, Peltz offers plenty of detail, along with deeper elaborations on his criticisms of the Cincinnati-based packaged-goods giant for a decade of underperformance.

Peltz reiterated that he doesn't want to break up P&G, fire Chairman-CEO David Taylor or cut marketing and R&D expenditures. But Trian's plan would reorganize P&G into three big global business units linked by a "lean holding company," down from the current 10 units, and appears to suggest deeper cuts in staffing than those already envisioned by the company's current $10 billion cost-cutting program, the second such effort in five years.

Trian's primary statistical evidence of P&G falling behind rivals in digital marketing is a chart comparing Instagram followers for its brands vs. competitors. For example, Always only has 12,000 Instagram followers versus 37,000 for Kimberly-Clark Corp.'s Kotex and 100,000 for Thinx. P&G needs to hire more outside talent to raise its game in digital, including e-commerce and subscription services, where Gillette, for example, has been losing ground to Unilever's Dollar Shave Club and Harry's, according to Trian.

As evidence of the "digital awareness" he could bring to the board, Peltz points to being the chairman of Wendy's, which among other things scored a huge social- and traditional-media windfall in April by challenging a Nevada teen seeking free chicken nuggets to get 18 million retweets. He does disavow any personal credit for this effort.

Peltz criticizes P&G for cutting marketing spending overall and in digital last quarter, which Chief Financial Officer Jon Moeller attributed to pulling the plug on spending that didn't comply with brand-safety and other audience-verification requirements.

Trian's report said P&G should have reinvested those cuts in "other forms of brand building to regain lost market share." And it said the move appeared to counter a commitment Taylor made in August 2016 to continue a "commitment to four quarters of brand support." The white paper also points to Clorox Co. Chairman-CEO (and P&G alum) Benno Dorer saying in August that his company has continued to increase digital spending "because it works."

Peltz's white paper says P&G's shedding more than 100 smaller and mid-size brands in recent years meant it "doubled-down on its large and global brands just as the world went smaller/more local." P&G instead needs to adapt its structure and culture to allow it to "manage and develop high-growth small, mid-size & local brands that delight the consumer in ways big brands cannot." He contrasted continuing share losses by P&G's Pantene to share gains by OGX, a smaller brand acquired by Johnson & Johnson last year, and said P&G needs to get better at acquiring, integrating and growing small brands, which he said the streamlined structure he recommends would do.

In a statement, P&G said its board and management team will "review Trian's 'white paper' in more detail" but that "it remains clear Trian has an outdated view of our company. The fact is that P&G is a profoundly different company than it was just a few years ago. We are much better positioned from all angles: Portfolio, cost and productivity, innovation and with a more agile and accountable organization and culture. We are successfully executing a winning strategy as evidenced by our strong fiscal year 2017 results."

Peltz is seeking a board seat at P&G's Oct. 10 meeting. The two sides are waging a bitter proxy fight in which they're spending a combined $60 million or more on marketing, much of it digital, $35 million of that coming from the P&G side.

As part of his effort, Peltz has hired former P&G chief financial officer Clayton Daley as an advisor. Daley retired in 2009, serving during the front end of the decade of underperformance Peltz has criticized, and helped lead acquisitions such as Clairol, Wella and Gillette Co. from 2001-2005 that P&G has since exited entirely or partly through divestitures.