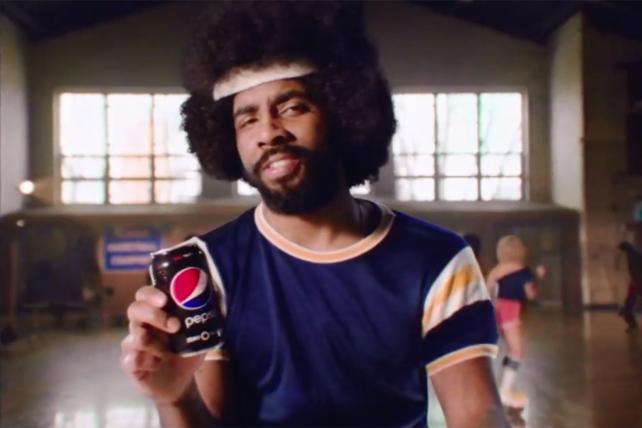 How's this for meta: Pepsi is running a new ad to tout a feature film based on the character starring in the ad. The star is Boston Celtic Kyrie Irving, who began appearing for Pepsi as "Uncle Drew" in a 2012 campaign that went viral.

"Uncle Drew," the movie, came to be as result of a deal between PepsiCo's in-house Creators League studio, Lionsgate's Summit Entertainment and Temple Hill. It opens June 29.

That's not all you'll see of Uncle Drew in the coming weeks. The Ad Council and AARP teamed up on a new PSA promoting saving for retirement that stars Irving and Shaquille O'Neil playing their characters from the movie. The spot could provide an extra awareness bump for the film, and by extension, Pepsi—without costing the beverage marketer a dime. Ad Council ads benefit from donated media time. Lionsgate produced the PSA.

Partnering with a commercial enterprise for a PSA cause is not unprecedented. Indeed, it's tactic the Ad Council has used pretty frequently of late. Earlier this year the group used characters from the "Peter Rabbit" movie to advocate against food waste in partnership with environmental group the National Resources Defense Council. "The Boss Baby" was featured in a PSA last year to promote financial literacy on behalf of the American Institute of Certified Public Accountants. Also last year, an anti-bullying Ad Council spot used characters from the "Emoji Movie."

The Ad Council, in a statement to Ad Age, said it uses film characters because they "have a built-in resonance with our audience," adding, "these partnerships provide a wonderful opportunity to extend our messages by raising awareness and helping motivate changes in attitudes and behaviors." The group attempts to avoid overtly promoting the films, however, it said. "These PSAs are always solely focused on the social good message," it stated.

Pepsi's ad, on the other hand, goes all-in on ginning up ticket sales. The spot features Irving's Uncle Drew character across multiple decades, sticking with the cola's recent ad approach of portraying the brand as a mainstay that has endured through multiple generations. The spot ends with a movie plug. The movie amounts to one of the biggest bets by Pepsi to leverage its intellectual property for commercial gain beyond directly plugging the soda (although it appears from the trailer that Pepsi branding is present in the film).

The ad is by the Creators League and Farm League, whose executive creative director, Marc Gilbar, was formerly with Davie Brown Entertainment, which co-created the Uncle Drew character with PepsiCo.

The Uncle Drew campaign, which cast Irving as an old man who can ball, began as a five-minute online video promoting Pepsi Max. It soon became a viral sensation. Other hoopsters in the movie include Chris Webber, Reggie Miller and former WNBA MVP Lisa Leslie. It also stars actors Milton "Lil Rel" Howery and Tiffany Haddish.