Kim Kardashian West is taking some heat for her new cosmetics product, P&G has found a new way to kill insects and Welch's is getting in on the sparkling rosé (this one won't get you buzzed). Find out about that and more below. But first, we check in on how pot might be threatening alcohol brands.

The Absolut Vodka of cannabis? 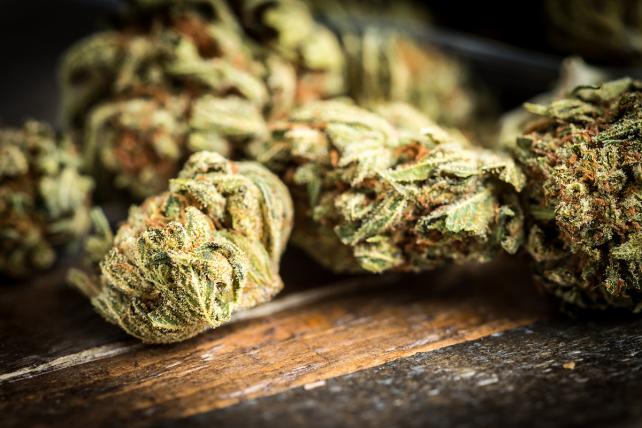 Alcohol marketers have been looking over their shoulder at legalized marijuana. And according to a former Molson Coors marketer, they have plenty to be paranoid about. "All alcohol is consumed only as a liquid. Cannabis meets more consumer needs and motivations in the way that it's consumed," Torsten Kuenzlen told Marijuana Business Daily. Kuenzien, a former executive at Coca-Cola executive and Molson Coors, where he was global chief commercial officer, has a reason to push pot. In February he was named CEO of Sundial Growers, a Canadian-based firm in the medical cannabis business. His ambition is to make Sundial the "Absolut Vodka or Coca-Cola equivalent of cannabis," he told Marijuana Business Daily, while estimating that "the profit pool for cannabis could be "as big as the entire alcohol industry in three to five years." (hat tip to Beer Marketer's Insights, which reported on the interview this week.)

But rather than fear marijuana, he says alcohol companies should consider the opportunities. Apparently many already are doing just that: "We know that all of the big companies are looking at cannabis, so obviously we're talking to many of them," he said in the interview. (Late last year Corona maker Constellation Brands took a stake in another Canadian marijuana company called Canopy Growth Corp.)

A forthcoming study should provide more insight on just how much of a threat marijuana is to established industries. Research firm Technomic this week announced it will study the impact of legalized marijuana on major industries, including adult beverage and foodservice. The report is due out in September.

Kim Kardashian West seemingly knows something about social media, what with 59.3 million Twitter followers and all. But she apparently missed all the cautionary tales of abuse heaped on beauty brands such as SheaMoisture, Dove, L'Oreal's Elvive and more in social media the past year over slights against women of color—either real or highly enhanced by the outrage machine.

Her KKW Beauty brand drew criticism for promoting a new concealer line by posting a photo on Twitter showing a black model wearing swatches of the concealer on her arm in a way that suggested none were appropriate for her. The Washington Post devoted a whole story to how Kardashian's new line "forgets dark-skinned women" and was badly outclassed by Rihanna's recently launched Fenty Beauty.

But as one Twitter commenter pointed out, only 13 of the shades were visible on the model's arm. The other three in the line were essentially invisible, like, um, concealer should be. A deeper look at KKW's Twitter feed showed many near-contemporaneous shots of women with various skin tones wearing the concealer on their faces. Subsequent posts showed the 16 shades on women of various skin tones to better show the full range. Even so, we've yet to find many folks coming to Kardashian's defense. Maybe there's a lesson here in getting it right the first time, or how (given sister Kendall Jenner's involvement in Pepsi's ad smackdown last summer) that the family is particularly good at engendering social-media rage.

Procter & Gamble Co., which last summer launched Zevo plug-ins that dispatch flying insects to the great bug beyond using blue-lit flypaper modules in electrical outlets, is expanding the brand with a new line of bug sprays. Keeping with the non-toxic theme, Zevo insect sprays use essential oils that P&G says are deadly to bugs, but not synthetic chemical pesticides. One cautionary note: New research on essential oils—though not specifically those used in Zevo—suggests that essential oils used in aromatherapy diffusers and natural personal-care products can have some drawbacks too, such as ones that disrupt human hormones. 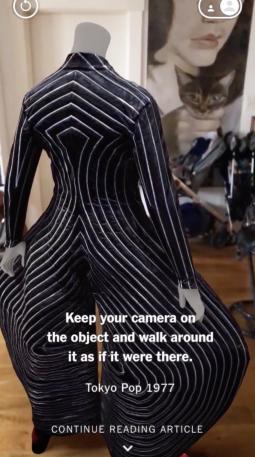 The New York Times debuted its latest augmented reality feature Wednesday, allowing people to intricately explore the many outfits of David Bowie.The musician had a plethora of personas, some of which include the Thin White Duke, Aladdin Sane, Major Tom, Ziggy Stardust and the Goblin King. The Times says people can project life-sized versions of Bowie in his iconic costumes into their own spaces, and "explore them as if they were physically there."

The outfits were captured photographically at the Brooklyn Museum's "David Bowie is," which closes its five-year world tour this July. BMW is sponsoring the Times' AR effort, which also lets readers interact with the car manufacturer's X2 Sports Activity Vehicle, or SAV (not SUV). The Times itself has been on a roll, as the publication reported revenue from subscriptions generated more than $1 billion in 2017, a first for the company. The publication previously told Ad Age that it's attracting new readers with efforts outside of traditional media, such as AR and its wildly popular podcast, "The Daily."

Every step you take, every move you make

According to a new report from Bond Brand Loyalty, a customer engagement agency, 87 percent of consumers don't mind having their activity and behavior tracked and monitored in brand loyalty programs, if they receive special perks and rewards as a result. Such reception is led by higher earners, at 94 percent, and Gen Z, at 91 percent, the study found. And roughly 37 percent, up from 30 percent last year, of shoppers are willing to pay a fee to access extra loyalty program benefits. That might be news for Target, which earlier this week said it was testing "Target Red," a new loyalty program that offers perks for free to consumers who don't use a Target credit card.

Attention Cannes party-goes who want to keep their edge: Welch's is seizing on the sparkling rosé craze by launching a non-alcoholic version.

Marvel: "Infinity War is the most ambitious crossover event in history."

Wingstop Restaurants CMO Flynn Dekker resigned after four years at the chicken wing chain. Dekker plans to take a sabbatical and spend time with his family while consulting with Wingstop as it searches for a new CMO.

Campbell Soup says Mark Alexander, president of its Americas Simple Meals and Beverages division, is leaving April 2 to pursue other opportunities. Campbell has not yet named a replacement to lead the unit, which is its largest by far with brands including Campbell's, Pace, Plum, Prego, Pacific Foods, Swanson and V8. The division has posted weak sales over the past few quarters due in part to declines in U.S. soup sales. Alexander has been with Campbell for more than 25 years.