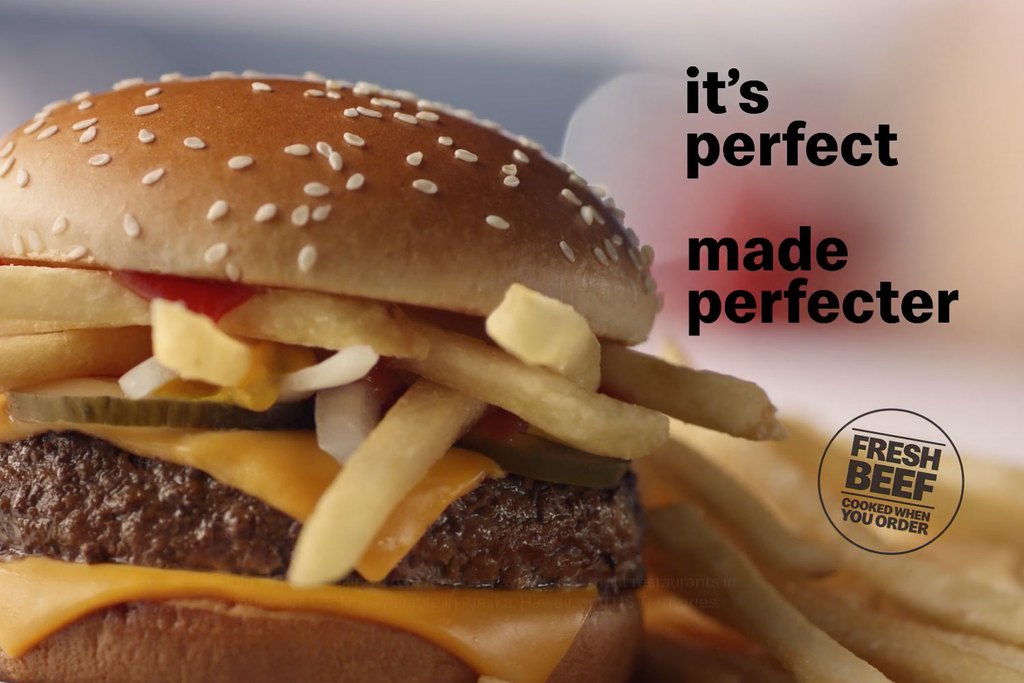 McDonald’s is airing six commercials during the Grammys emphasizing ingredients in one of its menu mainstays, the Quarter Pounder with Cheese.

The "It's perfect made perfecter” campaign is the first glimpse of the creative approach McDonald’s is taking with Wieden & Kennedy New York, which the Golden Arches hired last year as lead U.S. creative shop.

The spots showcase the beef, cheese, onions, pickles and buns of the Quarter Pounder, as well as the chain’s fries. While close-ups of burgers are nothing new in fast-food advertising, these spots suggest McDonald's is using a fresh take on the tried-and-true method. Along with Instagram-worthy close-ups, the quick commercials feature voiceover work by Brian Cox, known to many as Logan Roy on HBO’s “Succession.” Cox discusses each ingredient in the 15-second spots, much as McDonald’s super fans might try to describe the product —if they had the accent and cadence to pull it off.

In the first spot, a sizzling hamburger patty is seen as Cox speaks about “one hot and deliciously juicy hunk of quality beef.”

He then delivers the line “it’s perfect made perfecter” (grammarians, try not to cringe) followed by his rendition of the “ba da ba ba ba” beat from McDonald’s “I’m lovin’ it” jingle. Each of the commercials follows a similar format.

The six ads are being spread across commercial breaks during the Grammys broadcast on CBS. The push comes as McDonald's U.S. Chief Marketing Officer Morgan Flatley tries to deepen the connection the brand has with existing diners, attract lapsed visitors and bring in new ones. Her team and Wieden & Kennedy New York, its new creative agency, aims to showcase the food while nodding to the passion super fans have for its products. The spots break down the ingredients with a level of detail fans may appreciate, such as where the cheese is placed.

Onions are featured next.

The sesame seeds on the bun get their 15 seconds of fame.

Lastly, a dining hack likely familiar to some is suggested.

McDonald’s is promoting hamburgers while competitors have been emphasizing chicken sandwiches, prompted by the success at Popeyes. Plant-based patties are also having a moment, notably at Burger King, which is making the meat-free burger into a value play, as its Impossible Whopper is now part of a 2 for $6 sandwich deal. McDonald’s is testing its own new take on the fried chicken sandwich and has been advertising breakfast chicken sandwiches. It is also testing plant-based patties in Canada. But for now, when it comes to the national ad stage, the market leader is sticking with a traditional hamburger.

McDonald's plans to continue the brand storytelling effort with ways for fans to show their love for the Quarter Pounder with Cheese, or QPC as it's known among McDonald's employees and some burger fans. Plans include a calendar dedicated to the burger, an emergency pickle jar, and a Quarter Pounder Lovers’ Guide for Valentine’s Day.

The Quarter Pounder was introduced by franchisee Al Bernardin in 1971. McDonald’s switched from using frozen to fresh beef patties for the product in 2018. The fresh patty kickoff “Speechless” campaign from its then-lead agency, Omnicom’s We Are Unlimited, relied on celebrities including Gabrielle Union and John Goodman.