No more shrinking violets: Feminine care marketers tell it like it is | Ad Age
Skip to main content

No more shrinking violets: Feminine care marketers tell it like it is

In August, the feminine wellness brand Queen V published a colorful animated post on Instagram, with text that read, "Pop quiz: Your clitoris is shaped like a… A: wishbone, B: cashew, C: coin," along with corresponding imagery for each answer.

"We're taking a fun approach to a topic that doesn't need to be so embarrassing," says Lauren Steinberg, the founder of Queen V.

Helped by societal trends such as the Women's March and the #MeToo movement, marketers are defying long-held taboos (for example, replacing blue with red liquids on sanitary napkins in ads) and proudly positioning their products as vaginal wellness brands with colorful imagery, plain language and lighthearted tones. (The answer to Queen V's quiz, by the way, is A., a wishbone.)

The company is not beating around the bush. The Los Angeles-based brand is one of a growing number of companies that are normalizing the conversation around subjects such as periods, menopause, the female anatomy and sex.

Queen V debuted at Walmart earlier this year, and its products, including spritzers, lubricants, wipes and probiotics, have now expanded to specialty stores including Urban Outfitters. Four-year-old Lola, which started selling organic tampons, has since introduced condoms and cleansing wipes. Thinx offers underwear women can wear during menstruation.

"It's about changing the conversation," says Katie Keating, co-founder and creative director of Fancy, a 7-year-old female-focused creative agency. "This space has been traditionally occupied by the big brands [today's consumers'] grandmas used. As women are claiming more power everywhere, their bodies need to be in their control as well, with products that are fun and pretty and appealing."

Like other once-dusty retail categories that called for a contemporary update—sneakers, pet care and beauty have all recently been revitalized for today's digitally savvy customers—the feminine wellness space is scooping up venture capital dollars. This year to date, women's health startups have received nearly $537.7 million in funding across 94 deals (last year they received $595.4 million in investment across 92 deals), according to New York-based CB Insights, which tracks technology trends in emerging categories. Anagha Hanumante, a senior intelligence analyst at CB Insights, says firms selling such female-focused products and services fit well into the overall wellness category, which is tough to measure. The size of the market for sanitary protection products alone was $3.2 billion in the U.S. last year, and $30.3 billion globally, according to market research firm Euromonitor International.

Even women's shaving products are getting an update, as newcomers Billie, a "female-first" shave and body brand, and Flamingo, a line of body products including wax strips, shaving gel and moisturizers for women that debuted last month from the founders of Harry's, come on the market with sharp and colorful branding. Queen V, which sells its products packaged in shades of magenta, lime and cerulean, exudes an air of fun and playfulness in keeping with its millennial and Gen Z customers. Some brands resonate with women by using lighthearted language to break through some of the discomfort. 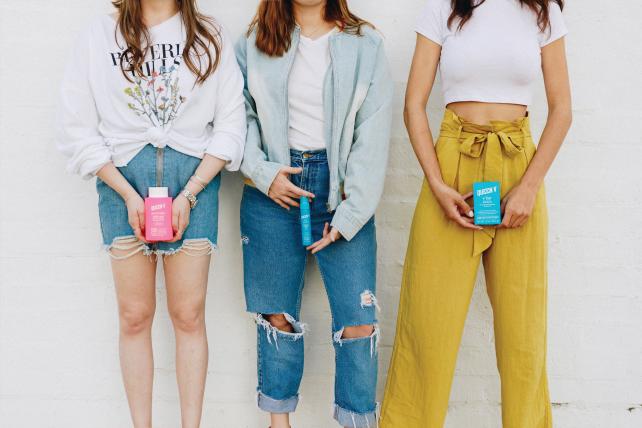 Jamie Dowd, a 35-year-old Brooklyn resident, began using Thinx a few years ago after the birth of her first child. She had noticed the brand's subway ads, and was eager to use a product that doesn't create a lot of waste and helps supplement her use of O.B. tampons. Thinx helped change her outlook on menstruation, Dowd says.

"A period is a normal thing in a woman's life and it comes with all this shame and secrecy," says Dowd, who owns a Pilates studio. "It's been a freeing thing for me to also speak more openly to my friends and my community."

Until recently, it was an uphill battle for such personal product brands to have an open marketing dialogue in a society trained to classify women's hygiene products as "unmentionables," and in a culture with the ingrained belief that open discussion of sexuality is distasteful. Historically, the female body was viewed as dangerous ground for its potential to incite lust, according to Rachel Carlton Abrams, author of "BodyWise."

"There's been a lot of fears that if women completely own and take responsibility for and enjoy their bodies, that somehow this societal structure will fall apart," she says.

Yet last year's Women's March, followed by the maturing #MeToo movement, have provided a more inviting backdrop for the launch and development of startups focused on feminine care. And society might be ready for them. Earlier this year, Libresse, a Swedish brand of sanitary napkins and other hygiene products, won a Cannes Glass Lion for its #BloodNormal campaign, which destigmatized periods by showing blood in its ads. 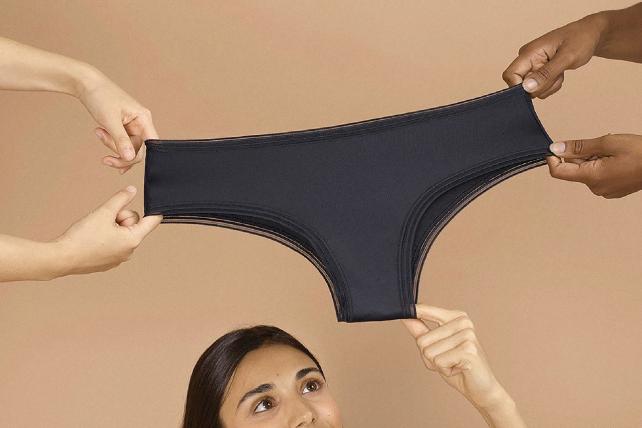 Thinx uses edgier advertising (pictured, a print ad for its panties) and out-of-home events like its

"Feminism as a brand reached its crescendo in 2017," says Siobhan Lonergan, chief brand officer of Thinx and its sibling brand Icon, which sells products for incontinence. She cited, for example, the cotton T-shirts emblazoned with the phrase "We should all be feminists" that Dior walked down the runway that year. "There's a heightened awareness of women's issues and rights [and it has sparked] this societal surge of conversation. Brands are rising to that challenge."

They're doing so with playful yet honest campaigns that are usually created from small, in-house creative teams. With the exception of Lola, which recently ran a campaign with agency Giant Spoon, most new women's products brands aren't investing their marketing dollars in external agencies. They're instead going straight to social media, where the majority of their customers spend their time, to run ads and content that educates without infantilizing. Queen V, for example, employs "a very authentic team of [eight] millennial women," says Steinberg. "We're sitting here brainstorming on products and packaging that would speak to everyone, [things] that we would love to see on our bathroom shelf." That is resonating with retail customers: The VC-backed brand is currently in 4,100 of Walmart's roughly 5,000 doors, an exclusive deal that expires next year on Queen V's 11-item product line.

Such on-the-ground, small-group creativity gives the challengers a leg up over established players, which have sprawling organizations and a complex approval process for both product development and advertising. As the number of startups in the space grows, larger consumer packaged-goods giants are beginning to pay attention. In recent years, Procter & Gamble, which owns tampon brand Tampax, and Kimberly-Clark, which makes Kotex, have introduced ingredient lists for products and packaging in an effort to be more transparent with consumers. Last month, Tampax added a menstrual cup to its offerings, responding to customer demand. Earlier this year, Kimberly-Clark helped start the Alliance for Period Supplies, a nonprofit that helps provide sanitary protection to those in need. Deniz Gurler, senior brand manager of feminine care at Kimberly-Clark North America, says the program has received positive feedback, "particularly from millennial and Gen Z women who look to purchase products made by companies who are supporting our communities."

To connect with consumers, several of the newcomers are utilizing experiential and grassroots marketing strategies. At Foria, a seller of cannabis-infused products for women to use during sex and menstruation, the majority of marketing is focused on educational content. Because of the inclusion of CBD in its offerings, the brand is constrained from traditional marketing online at Google or Facebook, says Mathew Gerson, co-CEO. Instead, Foria, which is based in Boulder, Colorado, and Venice Beach, California, where its creative and marketing team is located, relies on its own users to generate stories it then shares on social feeds. 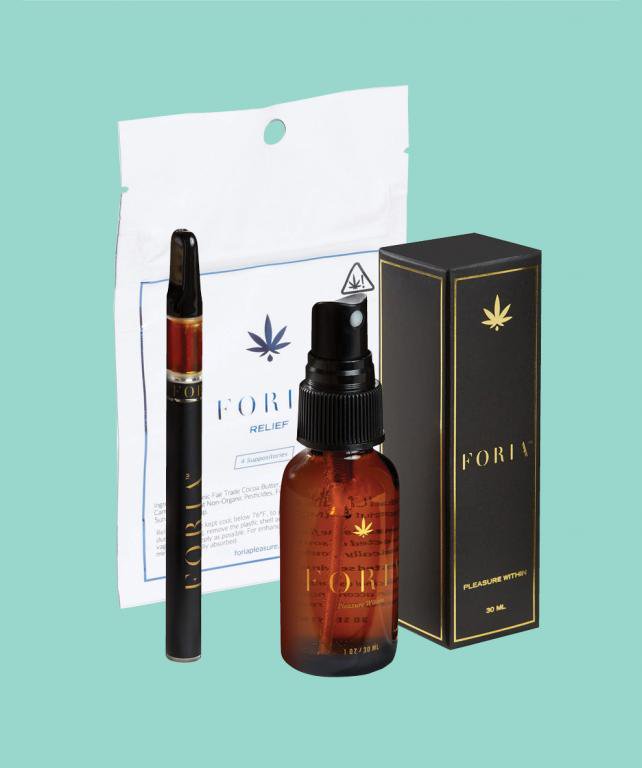 Foria sells cannabis-infused products for women to use during sex and menstruation.

"We're pollinators," says Gerson, who ran an all-natural condom company before co-founding Foria five years ago. "We take stories from our community and look at what is important to them before going deeper on articles on the issues." He notes that Foria, which sells in 70 countries, helps solve health problems for women but is challenged by having to explain that CBD does not get users high,
a common misperception.

To support the launch of its sexual health products line earlier this year, Lola ran a national phone hotline, "Let's Talk About It." Consumers could dial in to listen to sexual wellness experts and celebrities such as Lena Dunham discussing their experiences with sex. Such efforts paid off enough that the brand, which supplies tampons to Equinox and office employees at Harry's and Warby Parker, debuted a sexual wellness kit in September that includes product samples and a printed guide.

Thinx has relied on edgier advertising, including its memorable 2015 out-of-home effort that juxtaposed grapefruits and eggs with women in their underwear. Now under new leadership following the exit last year of controversial founder Miki Agrawal, who was accused of sexual harassment by employees, Thinx is in expansion mode. It recently ran a "Fearless Bleeding Tour" in cities such as Chicago, Denver and Dallas, where women could schedule appointments to come in and discuss their periods with health specialists. Traffic to the Thinx website in each region increased following such visits, Lonergan, the chief brand officer, says. Along with Icon, the incontinence line, the company now has a new collection, Thinx Between, for young girls aged nine to 16.

"It's a way to normalize, starting from the beginning," says Lonergan, who notes that the company, including Icon, grew 50 percent in sales between 2016 and 2017, and is on track to do the same this year.

Despite this frankness, experts say that any brands selling in the space, whether new or existing, should be careful in the tone they adopt. While none has received any backlash to date, experts say that the general goal should be to open the door to discussion and be transparent in getting customers to communicate with the brand and use the products.

"Not everything has to be funny, but if it causes connection, lets people express themselves, and is a brave thing to do, feels real and good, then that's the way," says Erica Fite, co-founder and creative director at Fancy.

So far, for some customers the approach appears to be working. "I'm excited to see all of these brands that are stepping up to the plate for women," says Dowd, the Thinx user. "It's so important that we have things for our body that are actually good for our body."