Starbucks Adds Another Hand-y Cup to its 2017 Holiday Lineup 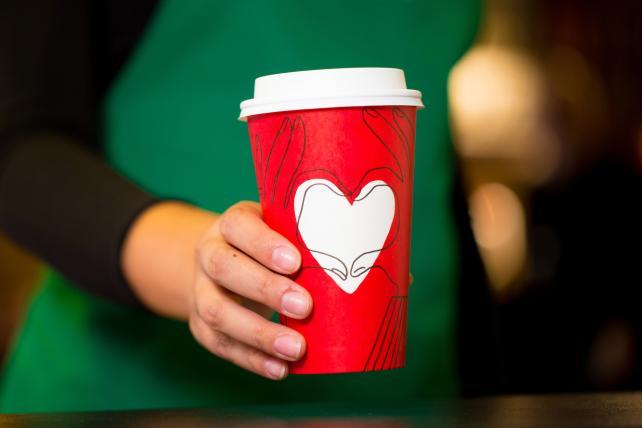 Starbucks is doubling down on holiday cups this season.

The company's shops around the world will begin using a new red cup with a pair of hands framing a white heart starting Tuesday, soon after another pair of hands on another holiday cup stirred up a little bit of controversy.

To be clear, Starbucks says it always had two cups planned for the 2017 holiday season.

"The new red cup is one of the many surprises we've had in store for our customers this holiday season," Starbucks said in a statement, adding that the holiday cup design process, which included the second cup, started back in January. But it didn't announce the second cup until late Monday.

Starbucks says it meant for people to interpret the cups in their own way. And, well, people did. The season's first cup, released at the beginning of November, was meant to show different seasonal moments. Part of the scene drawn on that first cup shows one hand holding another. And a video cartoon featuring that cup led some to believe that Starbucks was making a point about homosexuality, as two characters that appear to be women hold hands and lean toward each other.

The latest cup again puts non-gender-specific human hands in contact. Like the first, it is meant for some coloring or writing on it, with room in the heart for a name.

And, this being 2017, there's a social sharing element to the push, as Starbucks suggests people take photos of the names and designs they put on the cups and share them with the hashtag #GiveGood on social media.

"The holidays are about remembering what it means to give love and put goodness out into the world," Starbucks Executive Creative Director Leanne Fremar said in a statement. "We loved the idea of celebrating the good in each other this holiday season."

Both of this season's holiday cups were illustrated by Jordan Kay of the Starbucks Creative Studio.

Starbucks' own giving plans include donations, in collaboration with Spotify, of $1 million divided among three artists' charities: Chance the Rapper's Socialworks Chicago, Lady Gaga's Born This Way foundation and Metallica's All Within My Hands foundation.

The Starbucks Foundation has also given hundreds of thousands of dollars in grants as part of its Upstanders Challenge.