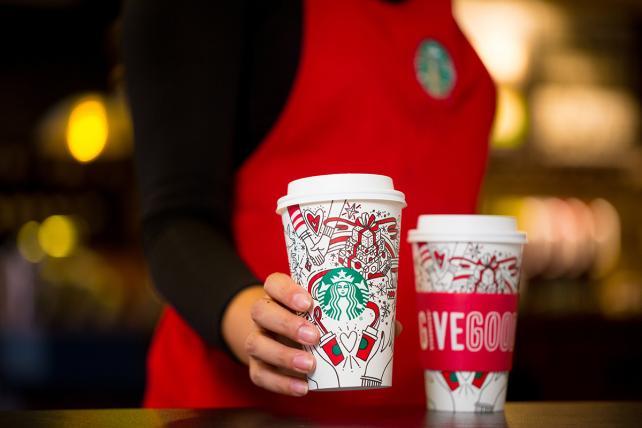 There is a tree. It has a rendering of the red cups Starbucks is known for during the holidays, though the actual cup is largely white. It features the traditional Starbucks siren icon in green, surrounded by black line drawings of seasonal moments accented by pops of red. But the cup is intended for consumers to put their own stamp on it -- it's more like a canvas to color than a completed design and it ncludes a tree, presents, and other holiday season imagery.

The 2017 cup comes 20 years after Starbucks' first seasonal cup and features hands holding red cups "as an ode to years' past," says Executive Creative Director Leanne Fremar. The images are meant to "represent some of the ways that people celebrate the holidays at this time of year."

In case you've forgotten, Starbucks opted for an ombre design in 2015 in which the red hue deepened toward the bottom of the cup, and lacked any specifically Christmas designs. The internet responded, as the internet does.

"There are lots of ways to usher in the holidays and at Starbucks we've always celebrated all of them," says Fremar.

Last year the largest coffee chain featured 13 cups with designs made by customers that clearly played on holiday and seasonal themes. This year's version was illustrated by Jordan Kay of the Starbucks Creative Studio.

A video of the cup will begin running online Wednesday.

The coloring concept shows that Starbucks is taking a cue from some customers and employees who draw their own designs on its cups. The sleeve for hot drinks features the words "Give Good," the theme of the chain's holiday campaign.

During the season, Fremar says, there will be "creative tools in store" to inspire people to color the cups themselves.