At Starbucks, It's Iced Tea's Time to Shine

Teavana is getting a bit of a makeover with new iced tea flavors in Starbucks shops and its biggest product campaign yet, part of the coffee chain's effort to expand its premium tea business after a plan to open hundreds of upscale Teavana tea bars worldwide failed.

Starbucks acquired the Tevana retail tea chain in late 2012. Two years later, Starbucks was opening Teavana Fine Teas + Tea Bars, a new concept for the brand, in cities including Chicago and New York and anticipated many more. Those outlets didn't catch on, however, and by early 2016 the handful of the locations Starbucks had piloted were closing, leaving just one in Seattle. (The original Teavana chain of stores continues to operate.)

Now three new flavors of Teavana Shaken Iced Tea Infusions are debuting, along with some new coffee drinks plus savory and sweet foods as Starbucks broadens its menu in its bid to appeal to more people throughout the day.

A supporting campaign from 72andSunny centers around the question "What does good feel like?" People share their answers in videos. At first, it's hard to tell it's all an ad for iced tea. 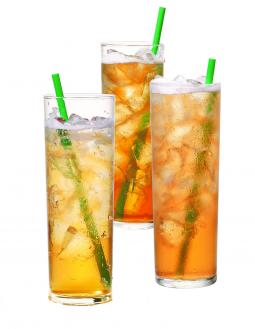 Like the core teas, the new ones are sweetened with liquid cane sugar but available unsweetened upon request. Peach and mango flavored syrups, which used to be added to iced teas upon request, are being phased out throughout the summer, Starbucks said.

Adding fruit and botanical blends to iced tea to flavor it, rather than syrups, may help Starbucks differentiate itself from competitors serving drinks sweetened with artificial ingredients. And Starbucks clearly retains aspirations to extend the brand beyond its coffee-centric stores. Earlier this year, ready-to-drink Teavana teas bottled and distributed by Anheuser-Busch InBev began appearing at other retailers.

The Teavana campaign includes a 60-second commercial for early morning TV, cable, online video, and movie theaters; a 15-second online version; and an extended 90-second cut for online. There is also a full-page print ad for magazines and newspapers and a one-hour giveaway on Friday.