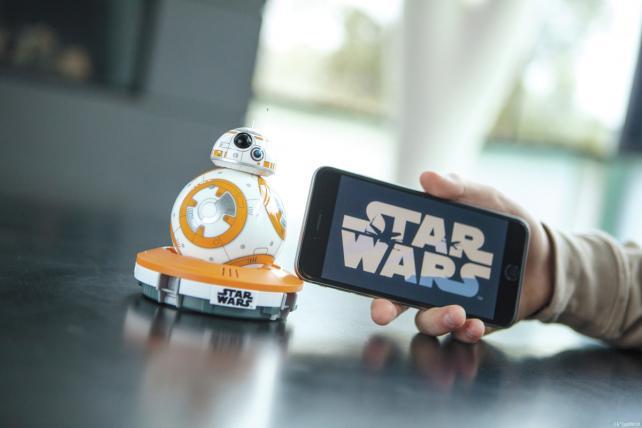 The BB-8 app-controlled toy droid, based on a robot character in the new 'Star Wars.'
Credit: Sphero

Sphero, the five-year-old startup behind what is expected to be one of the hottest toys of the year, the app-controlled version of BB-8 from Disney's "Star Wars: Episode VII -- The Force Awakens," is kicking production into high gear in preparation for holiday shopping.

BB-8, which looks like a soccer ball with a hemispheric head, is expected to behave a lot like the beloved R2-D2 in the new film, aiding companions and entertaining viewers. Some fans hunted the little droid as stores began selling out the same day it hit shelves -- Sept. 4, denoted "Force Friday" by Walt Disney Co. and retailers -- and the BB-8's page is one of the most-visited among those for new "Star Wars" characters on fansite Wikia.

Sphero's $150 BB-8, sold in packaging that resembles a shipping container, moves like the roving droid in the film and can be guided with a smartphone or tablet. The robot responds to voice commands, and records and plays videos -- rendered to look like "Star Wars" holograms -- through its smartphone app.

"It's as close to a real droid as you can get today and it will continue to get better" said Rob Maigret, chief creative officer at Sphero and a former executive at Disney.

It's the little details, like the fact that the BB-8 wanders on its own, that really make the toy feel like a companion.

"The BB-8, in part, it's just cute and fun," said Brian Linder, programming manager of entertainment at Wikia, who has a BB-8 of his own. "They've really done a great job of making it feel emotive and that's really something special."

The Boulder, Colo.-based Sphero, which builds connected and interactive toys, was thrust into the middle of the "Star Wars" fandom after entering the Disney Accelerator program for tech innovators in July 2014 and winning a bid to bring the droid to life late last year.

To prepare for the holidays, the company expanded staff, including web, operations, support and marketing teams, by about 30% this year, shrank its production cycle to 10 months from 18 months, and fortified its manufacturing pipeline so it could step up production when it needed to. The first 150,000 to 200,000 BB-8s sold out shortly after they were released on "Force Friday" and the company has taken a rounds of pre-orders that will roll out through October.

Producing the BB-8 droid is the largest-scale project the toymaker has embarked on to-date, but Mr. Maigret is confident that the shop is up for the challenge. The company planned for the possibility that demand would eclipse their expectations from the very beginning, he said.

"We bet on ourselves," said Mr. Maigret. "We prepped ourselves for the possibility that it would just be bonkers .... Everyone who wants one is going to get one."

Sphero's video content, packaging and marketing is the product of its internal marketing team, led by Kelly Nyland, senior VP-global marketing, creative and experience design. The startup also receives advertising support from Disney, which enabled it to strike up a partnership with Maker Studios as part of the "Force Friday" push, yielding a Snapchat campaign among other efforts. Sphero is now preparing for the next two big advertising rounds, building up to Black Friday and then the film's release Dec. 18.

"We're super fortunate because we fall into the natural wave of what's happening," said Mr. Maigret, adding that the buzz from fans has also introduced the toy to new consumers. "The marketing that's happening through evangelism has been really great."

It's worth noting that the startup's aspirations are much loftier than producing droids for "Star Wars" super fans. Sphero aims to put a robot in every home.

"For us this the beginning of that journey," said Mr. Maigret. "What better way to start with a home companion than a loveable guy named BB-8."