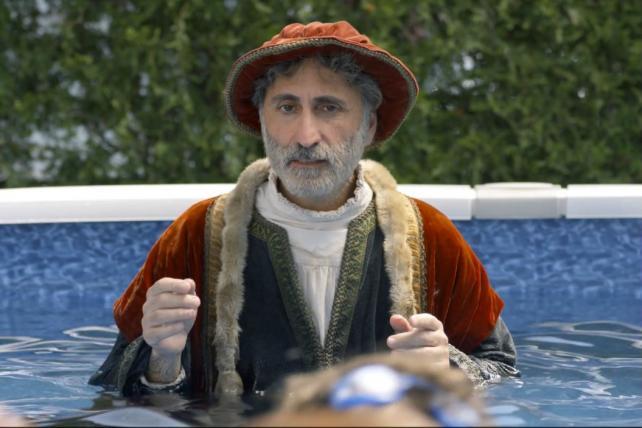 Geico has tapped a big name for a spot in its newest campaign—Marco Polo, the Middle Ages explorer famous for traveling Asia. In a humorous ad that stays true to the insurer's quirky humor, an actor appears as Mr. Polo in an outdoor swimming pool as children play the popular Marco Polo discovery game. Mr. Polo continues to say "Si, scusi," as he believes the kids are looking for him. A voice-over says, "Playing Marco Polo with Marco Polo? Surprising. What's not surprising? How much money Amanda and Keith saved by switching to Geico," as the camera shows real-life Geico customers holding a sign asserting $645 in savings. Meanwhile, a llama noses around the pool.

The commercial, which will appear nationally in 30-and 15-second versions on Monday, is part of Geico's new "It's not surprising" campaign and is one of several spots breaking this week. The Martin Agency, which has worked with Geico for more than two decades, created the marketing.

"We are never sure if a campaign will resonate with our audiences, but we have a pretty solid track record," said Ted Ward, VP-marketing at Berkshire Hathaway-owned Geico. "The use of testimonials is a tried and true technique."

The new work will coincide with two new spots from the "It's what you do" campaign, which began in 2014; both are part of the long-time tagline of "15 minutes could save you 15% or more." Geico will continue running its gecko brand messaging as well. The new campaign may ultimately replace the "It's what you do" work.

"Multiple storylines allow us to go into different worlds and pull out what we're trying to push," said Wade Alger, group creative director at Richmond, Va.-based Martin. "Because of the amount of media in our spend, it's nice to have multiple storylines out there to avoid burnout on our brand."

The new campaign will include social and digital efforts as well, according to Mr. Alger.

Last year, Geico spent $1.1 billion on measured media in the U.S. and was the second-most advertised brand according to Ad Age's Datacenter. Berkshire Hathaway's insurance group, which includes Geico, generated $45.8 billion in sales in 2015.

The insurer is not the only marketer to tap real customers in its marketing as customers crave authenticity—teen brand Hollister, which is owned by Abercrombie & Fitch, recently debuted a back-to-school campaign that includes the brand's actual shoppers.