Taco Bell Gears up for Value Fight in Fast Food

Taco Bell is stepping up its $1 message as the fast-food industry gears up for its latest low-priced fight.

The Yum Brands chain is opting for what could be considered opulence in a value play, with stylish ads meant to add a bit of drama and flair to its message. Its new campaign centers on a riff on the Illuminati, which Taco Bell, of course, is calling the Belluminati.

The $1 focus might seem like a departure for a brand that's been trying to boost its single-digit sales gains with things like fancier locations that serve alcoholic drinks. But its story of a not-so-secret society for enlightened people eating $1 items comes more than a year after the dollar-driven "Feast" campaign. Both came from Deutsch. 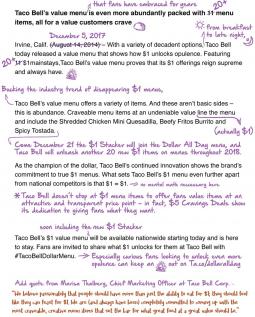 Taco Bell's latest emphasis on the dollar coincides with McDonald's plans to promote its new $1 $2 $3 Dollar Menu, which debuts Jan. 4. And when the industry leader discusses pricing, others are clearly going to respond. As soon as McDonald's announced the items that will be on the $1, $2, and $3 items, in a Dec. 5 statement, Taco Bell responded with a play on its own dollar-focused press release from 2014. Even Jack in the Box, a smaller rival that's less than one-tenth of McDonald's in terms of systemwide sales, announced its own lineup the same week. The "Value Done Jack's Way" menu has items priced at $1, $2, and $3, a combo for under $5, and debuts in January.

And all of the messages are a continuation of what's been seen recently. One somewhat unique indicator, fast-feeders' value and giveaway offers on Facebook, climbed sequentially in the third quarter, "which we interpret as a sign that promotional activity is likely to persist," Cowen analyst Andrew Charles noted back in October.

Taco Bell wants to elevate its value message, says Chief Marketing Officer Marisa Thalberg, who has an affinity for mixing storytelling and value messages, and is a self-described bargain shopper.

"I've read some statements lately where you see other industry leaders talking about value with words like it's a race to the bottom, or you don't ever win on value, and I will tell you we just couldn't be more philosophically opposed to that," says Thalberg. "We believe value is fundamental to what we offer and I think there's a huge difference between being cheap and offering value."

And dollar-priced items can generate substantial buzz, as Applebee's has seen with this month's $1 Long Island Iced Tea, or Dollar L.I.T. Of course, in fast food, such low pricing has been a mainstay for years.

"What is perhaps different now is that the message that they're trying to create is not one just of low cost but that we are innovating, being creative, trying to meet consumer needs with new products but doing it in a value-oriented way," says David Henkes, senior principal at Technomic, a restaurant and food industry consulting firm. "You can't always rely on new products to drive growth and you can't always rely on value menus to drive growth, but by doing both I think you're creating a little bit more of a higher likelihood of success."

"I want someone shopping our value menu to feel as fabulous as someone buying something at a higher price point from us," says Thalberg.

The Belluminati message will appear online, in movie theater ads, on streaming and traditional radio, and elsewhere.

"This should not feel like any value advertising you've ever seen before," says Thalberg.

The right mix of value and new products can entice loyal customers to buy more and lure new or lapsed customers, generating the visits the chains needs in a low-growth industry. Technomic expects U.S. fast-food sales will rise about 3.2 percent this year, with the chance for a slight acceleration beyond that in 2018, notes Henkes.

"The restaurant industry is growing slowly but it's a mature, saturated market," says Henkes. "It's a competitive market."