Target Broadens Beyond Hispanics, Families With Kids for Holiday 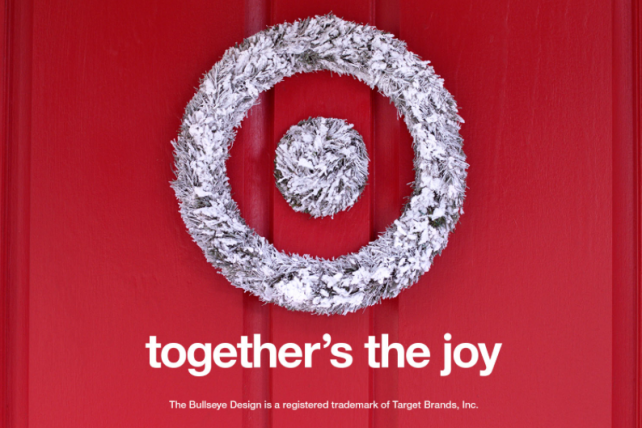 Last year, Target's holiday push was all about Hispanics and families with kids. But the retailer missed out on some key revenue by not tailoring its messaging to reach a broader audience, executives say. This year, the Minneapolis-based brand is trying to win the holiday season by avoiding the same mistake, forming new marketing partnerships and coming out with wider messaging.

"We feel like we left a lot of sales on the table last year" by not marketing to empty nesters, teens and families without kids, said Rick Gomez, executive VP and chief marketing officer, speaking at a media event in New York last week, citing Target's own consumer research. "This is an opportunity to evolve the conversation to be more inclusive."

Target plans to increase its marketing spending for the holiday season by a percentage in the mid-single digits, according to Gomez.

In 2016, Target spent $148.3 million on measured media in the U.S. during November and December, according to Kantar Media.

Despite the cloud lingering over many retailers, Target has been pushing forward with remodeling existing stores and opening new ones in order to take market share from fading and fallen competitors. And some of the push is working: The company reported a 1.3 percent increase in comparable sales for the second quarter. Overall sales for the period were $16.4 billion, a 1.6 percent rise over the year-earlier period.

Called "Together's the Joy," Target's holiday effort will begin Nov. 1 and include 10 TV commercials in both English and Spanish. Some, like a spot starring "Jane the Virgin" actor Jaime Camil, will be particularly relevant to the Hispanic audience. The brand's creative team worked with Deutsch L.A.; Team Arrow handled media duties and creative agency Knock worked on in-store marketing.

Despite the broader intentions for this holiday season and some talk this summer of a pullback in Hispanic spending overall, Target CEO Brian Cornell stressed that the group is still a focus for Target. "We've directed a lot of marketing and media to that audience," he said. Amazon rolled out a Spanish-language site earlier this year, but Target does not have plans for its own Spanish site "at this point," according to Cornell.

To attract more consumers, Target is expanding into new partnerships and will work on custom-created content with Popsugar, the NFL and Snapchat this holiday. It's also focusing more on in-store with events like a Lego Santa Claus photo opp for customers, Star Wars demonstrations, and both product and cocoa giveaways. Target's 1,800-unit fleet is a main point of differentiation from key competitors, Gomez said (without actually naming Amazon). Rather than the two-year-old 10 Days of Deals promotion, a successful endeavor in 2015 that did not prove as lucrative last year, Target will lean big into weekend promotions beginning Nov. 11. And it's pushing more value.

"We've lowered the price on thousands of items in-store," said Mark Tritton, executive VP and chief merchandising officer at Target, noting that such adjustments will be reflected in marketing messaging.

Digitally, Target is hoping to continue the holiday momentum it's had for the last two years—34 percent sales gains in the fourth quarter in both 2016 and 2015. The company is introducing a GiftNow program where consumers can buy items electronically for recipients who can choose their own size and color, or another item entirely. "It's the perfect solution for that fussy relative we all have," said Mike McNamara, executive VP and chief information and digital officer. Free shipping promotion will begin Nov. 1, a week later than last year.

Target will also focus more on Thanksgiving this year, airing a spot with "Fixer Upper" stars Chip and Joanna Gaines. The popular duo now have a home and lifestyle brand with Target called Hearth & Hand With Magnolia.

~ ~ ~
CORRECTION: An earlier version of this article attributed a quote about Target's new GiftNow program to Mark Tritton, executive VP and chief merchandising officer at the company. The speaker was Mike McNamara, executive VP, chief information and digital officer.