Cyber Monday Sales Up 16%, But Hottest Deals Were Gone Before Day Even Began | Ad Age
Skip to main content

Cyber Monday Sales Up 16%, But Hottest Deals Were Gone Before Day Even Began 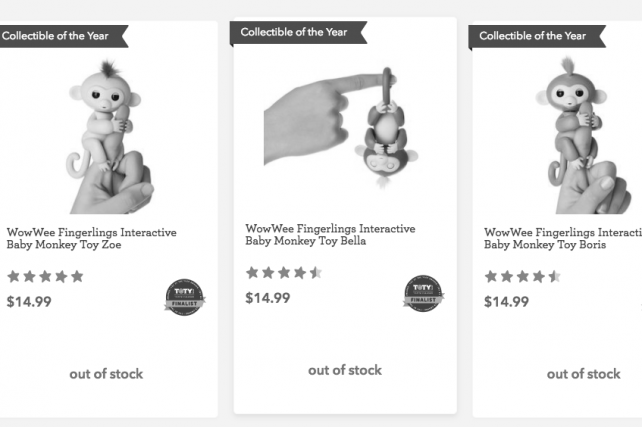 Toys R Us sold out of some must-haves before Cyber Monday.
Credit: Toysrus.com

So much for Cyber Monday. After robust online sales during Thanksgiving and the holiday weekend, many retailers continued to pile on the deals on Monday morning with promises of 15 and 25 percent discounts across the board at marketers including Toys R Us and Target. Sounds great in theory.

Here's the rub: Many must-have holiday items were already sold out, snatched up by eager shoppers browsing from their couches over the weekend.

Those shoppers who waited for the best deals on the season's hottest toys and electronics received a rude awakening on Monday as they saw first-hand the results of tighter inventory management from struggling department store chains. Many hot toys touted by retailers, like last year's must-have item Hatchimals and a new LOL Big Surprise ball, were unavailable online. Fingerlings, interactive finger puppets, were sold out at Walmart despite the brand promoting such exclusives last month.

From Thursday through Sunday, shoppers spent nearly $13 billion online, 14.4 percent more than last year, according to Adobe Insights. Meanwhile, in-person store sales declined over last year, many analysts found. While Cyber Monday is still expected to rake in record spending—Adobe predicts $6.6 billion, 16.5 percent more than last year—in recent years some dollars have been trickling into the preceding weekend as online shopping picks up with more consumers who now know they can get a bargain without waiting for Monday.

"Cyber Monday is no doubt losing relevance," said Judge Graham, chief marketing officer of Ansira, a data-focused marketing agency, noting that its origins date back to 2005, a time when few had smart phones, let alone high-speed internet at home, and shopped when they returned to their offices on Monday. "Retailers have begun to offer online holiday sales on Thanksgiving and Black Friday to meet changing consumer expectations—online deals have snowballed, and the idea that they must be limited to one single day is no longer meeting consumer shopping habits."

Marketers such as JC Penney and Kohl's released their circulars weeks before Thanksgiving so consumers could get a sense of what deals would be offered both in store and online and plan accordingly.

Of course, some toys routinely disappear early on because that category has antiquated selling and pricing practices, cautioned Sucharita Mulpuru-Kodali, VP and principal analyst at Forrester, who noted the record expectations for Cyber Monday.

However other items, like a Playstation 4 console and an Amazon Fire tablet at Target, as well as a Chefman panini grill from Best Buy, all heavily advertised ahead of Monday, were unavailable the day of.

Some shoppers aired complaints on Twitter throughout the day.

I'm getting my holiday gift guide ready for tomorrow but so many of the things I picked are sold out now from this weekend! #blackfriday #CyberMonday pic.twitter.com/Yai2EgJ2qH