Time's Up CEO quits after her son is accused of assault

Lisa Borders, who joined after serving as president of the WNBA, resigned this week 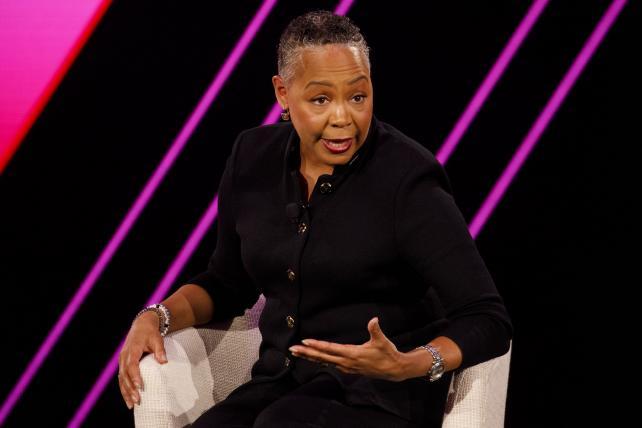 Time's Up, an organization formed last year to combat sexual harassment and assault in the workplace, is now coping with a crisis within its own ranks.

CEO Lisa Borders, who announced she was stepping down earlier this week, left the organization because her son was accused of sexual misconduct, Time's Up disclosed late Thursday.

"Lisa Borders informed members of Time's Up leadership that sexual assault allegations had been made against her son in a private forum," the group said in an emailed statement that it also posted on social media. "Within 24 hours, Lisa made the decision to resign as president and CEO of Time's Up and we agreed that it was the right decision for all parties involved. All of our actions were fully guided by our support for survivors."

Time's Up issued the statement after the Los Angeles Times reported that Borders's son, Garry "Dijon" Bowden Jr., was accused of violating a woman during a massage. A lawyer for Bowden disputed the woman's account, saying there was no inappropriate or nonconsensual touching, according to the Times.

Borders and her son couldn't immediately be reached by Bloomberg.

When Borders announced her resignation earlier this week, she said it was to address "family concerns that require my singular focus."

The shake-up leaves Time's Up in need of a new leader. Borders, a former Coca-Cola Co. executive and president of the Women's National Basketball Association, helped raise the profile of the group.

Time's Up was formed in January 2018 by a group of Hollywood artists, executives and producers, feeding on the outcry surrounding disgraced producer Harvey Weinstein and the broader #MeToo movement. The group says it advocates for a safe workplace for women from the farm fields and factories to the executive suite.

The initiative also led to the formation of the $24 million Time's Up Legal Defense Fund, administered by the National Women's Law Center, to represent survivors of harassment. That group has already had more than 4,000 requests for assistance in harassment cases, mostly from low-income women.

Time's Up said this week that Chief Operating Officer Rebecca Goldman would be serving as interim CEO while it conducts an executive search.

"We remain committed to our mission to create, safe and dignified work for women of all kinds," the group said.