Walmart plunges into retail future, bringing VR to the masses

Spatial& starts with immersive ride for 'How to Train Your Dragon'

A trailer in the parking lot of a Walmart in Burbank, California, isn't where you'd expect to find the future of retail marketing. But inside is the first tangible product of Walmart's Spatial& retail-tech startup—and it can simultaneously impress you and turn your stomach.

Based on the film "How to Train Your Dragon: The Hidden World," and created by Spatial& (pronounced "spatial-and") and DreamWorks, it's a 10-minute virtual-reality show that includes a five-minute VR simulation with stops to talk uncomfortably close with animated characters and to pet dragons during a high-speed ride through a cave. Motorized pod seats to simulate riding the animated beasts. And it's free, except for licensed film merchandise in an actual-reality gift shop at the end.

After starting in Burbank last month, the VR tour has been working its way across 40 stores in seven cities—essentially along the classic Route 66 on its way to the Bentonville, Arkansas, headquarters, which it expects to reach in April. It could get an extended release if the reception is strong, says Katie Finnegan, CEO of Spatial&.

Finnegan sees the show as just the start of how Walmart will play its advantage of having more than 4,000 physical stores to host VR experiences. She envisions sporting-goods departments where people put tents together and lie down inside without ever having to open the box, or baby departments where people can see what it's like to stow strollers in overhead airplane bins, and more.

A recent report from global market intelligence firm International Data Corp. predicts that the retail industry will be one of the biggest investors in augmented and virtual reality this year, spending $1.6 billion on the technology. Personal-care and consumer-service firms are expected to also invest $1.6 billion. CB Insights recently listed retail as a category ripe for the disruption of VR and AR.

Macy's has already found success with the technology in its furniture department, opening its 100th VR furniture gallery last month. Executives recently said that customers who use VR return items less frequently and spend more than those who do not. The initiative, Macy's says, has also helped it save on square footage space within stores while simultaneously offering deeper inventory for customers.

"VR for us wasn't a shiny penny," said Macy's CEO Jeff Gennette on a recent earnings call. "It really did solve a problem that our customers are experiencing."

But Finnegan says VR hasn't lived up to its hype so far because it's been largely confined to gamers, and retail applications have been uninspired.

"What I've seen ... is more taking the current world and repurposing it," Finnegan says. "We're not out to take the store and put it in a headset." But she does want to take an enhanced version of VR to the masses who won't be able to afford it anytime soon, she says. "We can give the American population access overnight."

Spatial& is one of a handful of startups within Store No. 8, Walmart's incubation arm, on whose board Finnegan also sits. It's named after an old store where Walmart founder Sam Walton liked to experiment. The goal is to offer Spatial& services to other retailers. 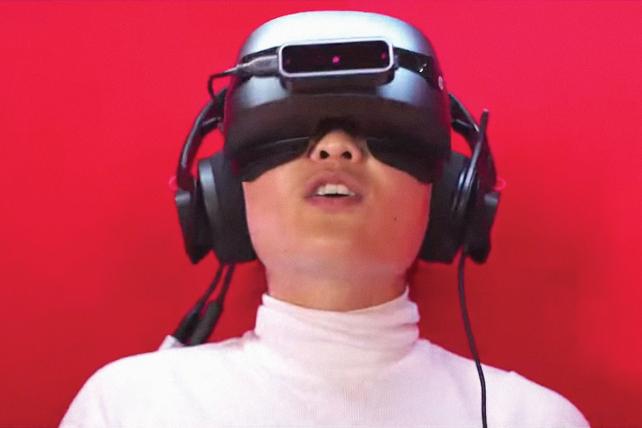 This is the second project to officially emerge from Store No. 8 after Walmart launched JetBlack, a high-end voice-to-text concierge e-commerce service initially for people in Manhattan apartment buildings, last spring.

As for the ride, it can be breathtaking—and stomach-churning. It took tweaks to keep some players from vomiting, says Kurt Mattila, commercial director behind the Walmart simulation, who created the dreamlike "precog" sequences in the film "Minority Report."