Grubhub is delivering a love letter to restaurants in a campaign showcasing what diners have embraced and elements they’ve missed during the coronavirus pandemic as they’ve ordered from home.

One ad called "We Serve Restaurants” is a voiceover letter to restaurants, with wording such as “thank you from the bottom of our stomachs” and mentions of moments of joy, “like the rogue onion ring that ends up in our fries.”

The 60-second spot summarizes many of the ways people have felt about ordering from restaurants, particularly over the last 15 months. It is illustrated with scenes such as busy kitchens and masked Grubhub drivers picking up orders.

“Without you, we wouldn’t be Grubhub. We’d just be hub,” it ends.

Its debut comes as the restaurant industry continues to try to recover from the depths of the pandemic, which led to the closure of thousands of restaurants and plunging sales at many of those that remained open.

The spot comes from 72andSunny New York. It was directed by Henry-Alex Rubin out of Smuggler.

“Be it a burger joint, smokehouse, pizzeria or a fine dining establishment, this campaign is a love letter to them, because without them Grubhub wouldn't even exist,” Ida Gronblom, group creative director, 72andSunny New York, said in a statement.

The campaign, shot in real restaurants with their own staffers and families, has a very different feel from the animated delivery dance spot the company began running last year to promote its Grubhub Perks loyalty program.

Restaurants resuming more in-person dining pose a potential hit to delivery services such as Grubhub, which thrived in the pandemic as people placed orders from home. Grubhub, which is set to soon be acquired by Just Eat Takeaway.com, is positioning itself as a continued go-to online destination while also acknowledging the return of dining out.

Out-of-home ads deliver on that idea, with text that reads “go out to eat if you can, Grubhub if you can’t” that will be posted in cities including Chicago, Los Angeles, New York, Oakland and Philadelphia. 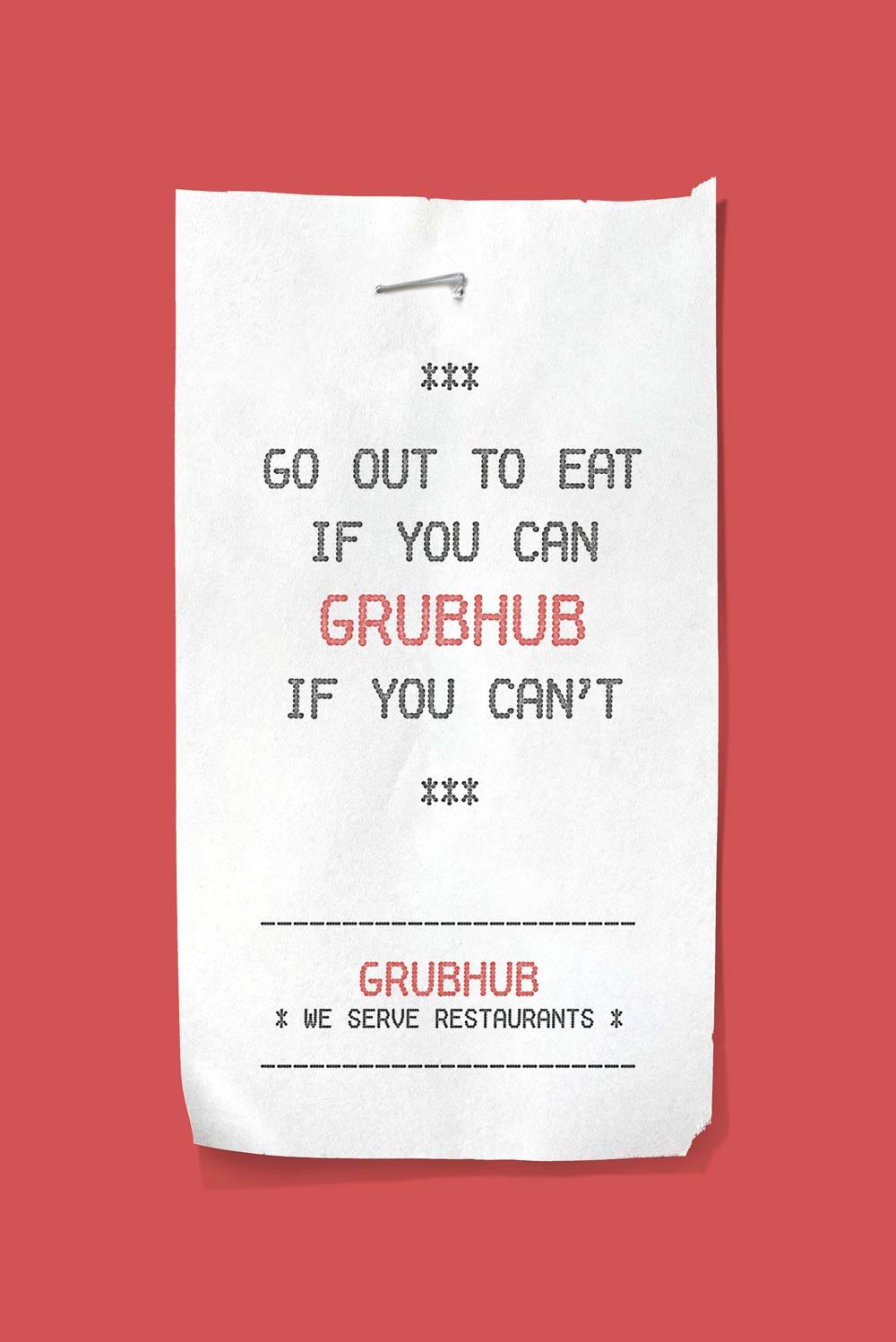 “We really feel like based on the behavior changes of the consumer during the pandemic that restaurants will be opening up their indoor dining, but delivery and pickup and online ordering has accelerated and is here to stay,” says Kearns.

Finding enough people to take jobs that might include long, late hours and low wages, remains an issue for many restaurants. Still, the industry is staffing up. Restaurants added 830,000 jobs in the first five months of 2021, an encouraging signal, yet employment remains 1.5 million jobs below pre-pandemic employment levels, as the National Restaurant Association noted this month.

When Kearns speaks with restaurant operators, “the mood is one of optimism,” he says. As for the labor shortage, “it is a challenge but one that they can get through.”

Grubhub, like other major delivery brands, found ways to support the industry during the pandemic. Its Grubhub Community Relief Fund, including donations from customers that it matched, raised more than $15 million for restaurants, drivers and others. And it offered grants for restaurants to help winterize their spaces and to reopen.