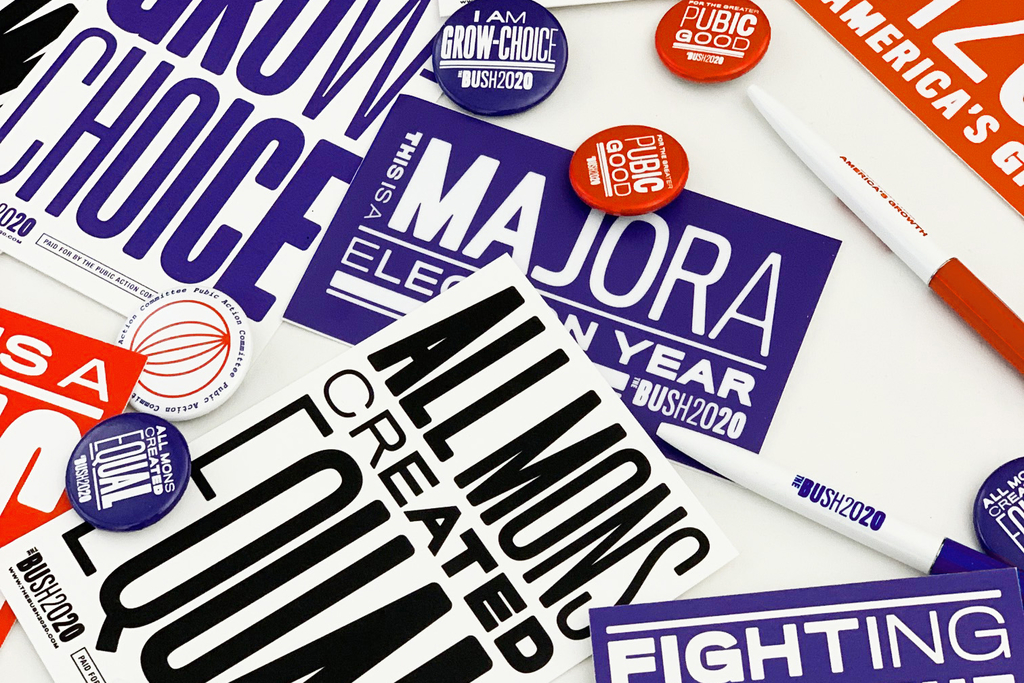 Flamingo, which sells razors and body-hair care products for women, is clearly having some fun with its new campaign, debuting this week. Just in time for election season, the New York-based brand is promoting “The Bush 2020,” which it describes as a “grow choice movement.” In order to encourage women to feel more comfortable about their body hair routines, the brand is trying to be as direct as possible, according to Allie Melnick, general manager of Flamingo.

“We understand your personal care routine is just that—it’s personal,” she says. “Everyone has unique choices and preferences—no one or two women’s routines are the same, and we really want to be that brand that can support that personal choice, that personal experience.”

Flamingo worked with graphic designer Paula Scher on the graphic identity, which will appear on swag such as bumper stickers, posters and pins. Sayings include “I’m with hair” and “For the greater pubic good.” The work will also appear in a paid ad in the New York Times on Tuesday, and in out-of-home ads around New York City. Flamingo is hosting a “campaign headquarters” experiential site on Canal Street in New York from Oct. 23 through 27 that will include events such as a visiting gynecologist answering questions. It’s also running an 800 phone number for questions and a campaign microsite.

The new campaign is also heralding a new product Flamingo is adding to its lineup. The “Mons Mist” is a skin conditioning spray that works for both hair and shaved skin.

“With the launch of this product, we had the wacky idea that turned into a real idea of The Bush 2020,” says Melnick. “It’s really all about bringing levity and this conversation out into the open in a way that doesn’t feel intimidating or hush-hush.”

Flamingo also sells razors, lotions and wax kits. The direct-to-consumer brand was founded a year ago as a female-focused offshoot of Harry’s, the popular men’s razor company that owns its own factory for ultimate supply-chain control. While the women’s shaving industry had been relatively bare, recent years have seen the field grow more crowded. Walmart now has its own women’s razor brand called Joy, which it created exclusively with Gillette.

Billie, a direct-to-consumer brand that sells razors, was founded two years ago—the brand has had its own share of provocative campaigns that communicate the power of choice when it comes to body hair.

Yet while these campaigns certainly generate buzz by consumers and the media, they’re getting more intense scrutiny by digital platforms and TV networks for their norm-challenging content. Earlier this year, Billie was not able to advertise an ad on Facebook because the spot highlighted a body part, Billie’s executives say. And this month, Thinx, a women’s underwear brand that absorbs moisture including menstruation blood, had issues airing the original version of a commercial that imagined a world in which men have periods because one man sported a tampon string. But Flamingo isn’t concerned about potential censorship.

“We’re confident that what we’re saying is important to go out there—we got the green light from the New York Times and we’ll see what else happens,” says Melnick.

Experts expect these campaigns to continue as the conversation around women’s bodies becomes less taboo.

“We’re definitely going in the right direction for change because we’re normalizing these aspects of women’s lives that are true for every single woman on the planet,” said Katie Keating, co-founder and co-chief creative officer of Fancy, a creative agency, in an interview earlier this month. “For way too long have been stigmatized and shamed and now we’re bringing them into the open.”