A scene from an ad in Wonderful Pistachios' new campaign.
Credit: The Wonderful Co.

The Wonderful Company is making its biggest bet yet that it can woo salty snack lovers to "Get Crackin'" and try pistachios.

Its Wonderful Pistachios brand had what one might call a wonderful crop this year. So it is boosting marketing spending significantly and reducing prices by 25% to sell a huge amount of pistachios.

"Mother Nature was very kind, so as a result of that we need to sell more of them and so we will be doing more aggressive marketing," said Michael Perdigao, president of the Wonderful Agency, the in-house advertising agency for the Wonderful Co. "To try to generate additional trial and sales, we're going to reduce the price on our brand."

Marketers for Wonderful Pistachios, introduced in 2009, are pivoting from a reliance on personalities to focusing on an animated elephant who enjoys pistachios. There is still a bit of a celebrity angle, however: Ernie the Elephant is voiced by WWE star John Cena. Plus, Seattle Seahawks player Richard Sherman will be featured in digital videos and two "Get Crackin'" commercials later in the football season.

Wonderful Pistachios plans to spend $55 million on media from now through Sept. 1, 2017, making it the brand's biggest campaign ever, Mr. Perdigao said.

The brand's strongest celebrity connection to date has been with Stephen Colbert, who starred in 15 spots for the brand including a 2014 Super Bowl spot before leaving his "The Colbert Report" character behind for "The Late Show" on CBS. 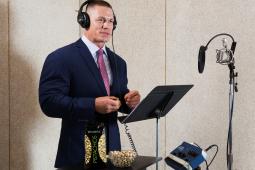 The idea to have Mr. Cena voice the elephant, in fact, can be tied to Mr. Colbert. As Mr. Perdigao recalled, Wonderful Co. founder Lynda Resnick saw Mr. Cena appear on "The Late Show," and called to say she had found the voice for Ernie.

"We joke that he's tough on the outside, but kind of soft and delicious inside," with a bit of the "irreverent sense of humor" that the brand has been known for, Mr. Perdigao said.

The first two spots, one focused on a baseball game (above) and another that takes place in an elevator (below), are set to begin airing Oct. 10. "I mean, who wants to eat a food that starts with 'p' and ends with 'nuts,'" the elephant says in the "Baseball" spot.

In all, the new "Get Crackin'" campaign includes 10 TV spots that should all begin airing by the end of 2016 and run at least through fall 2017. Billboards and print ads focus on health messaging, including comparing pistachios to potato chips, and do not feature the elephant. There are also various online and in-store marketing plans.

The price reduction that takes effect in October marks the first such drop following steady rounds of price increases, but Wonderful Pistachios is not calling out the change in its advertising.

Mr. Perdigao did not rule out a return to the Super Bowl for the brand, which aired spots in 2013 and 2014.

"We don't currently have a Super Bowl commitment but we are in discussions," he said.

Wonderful Co., which handles its own creative and media strategies through its in-house Wonderful Agency, worked with Moving Picture Company on the special effects for the computer-generated Ernie the Elephant.