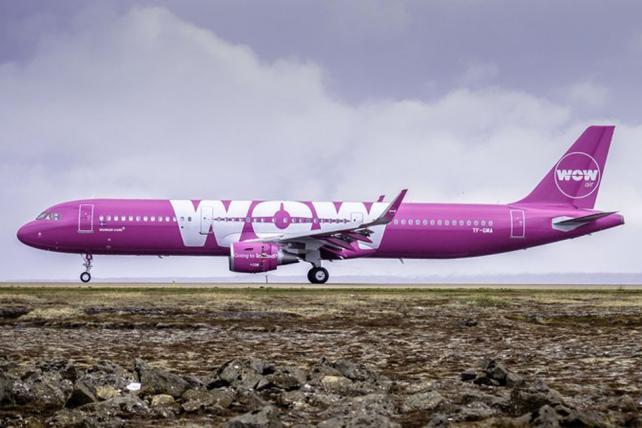 Wow Air has gone out of business, stranding thousands of passengers and creating potentially huge risks for Iceland's tiny economy and its growing reliance on tourism.

The discount carrier is the eighth European airline to have failed since the summer as margins are pinched by fluctuating fuel costs and over-capacity that's sparked a continent-wide fare war.

All 29 of Wow's flights scheduled for Thursday were canceled and 2,700 passengers were asked to check with other airlines to get to their destinations. The government activated contingency plans and issued a statement seeking to offer reassurances about the consequences for the local economy.

"We have run out of time and have unfortunately not been able to secure funding for the company," Chairman Skuli Mogensen said in a letter to employees. "I will never be able to forgive myself for not taking action sooner."

Mogensen had been working furiously over the past months to save the airline he founded in 2011, holding talks with potential rescuers including Icelandair and U.S. private equity firm Indigo Partners. This week, Wow bought time when bondholders agreed to convert debt into equity, and the airline reportedly proposed a $160 million turnaround plan. But plane leasing firms ultimately pulled the plug as they sought to place their aircraft elsewhere ahead of the start of the high season.

Shares in Icelandair shot up as much as 28 percent on the news.

Wow had earlier said it was in the "final stages" of raising new equity from a group of investors, telling passengers flights had been postponed until "documentation with all parties involved have been finalized." But those talks ultimately failed.

Passengers are advised to check available flights with other airlines. Some airlines may offer flights at a reduced rate, so-called rescue fares, in light of the circumstances. Information on those airlines will be published when it becomes available.

Along with Icelandair, Wow has played a key role in the country's decade-long boom in tourism, which is now its biggest export.

The closely held airline carried 3.5 million passengers last year. Its crisis has weakened the krona (the currency fell as much as 1.44 percent on Thursday alone), triggering cabinet meetings that saw the government rule out a rescue using taxpayers' money.

Visitors to Iceland are set to drop this year for the first time in a decade, according to the operator at Keflavik International Airport. Stefan Broddi Gudjonsson, an economist at Arion Banki, said the Wow Air debacle could cause tourist numbers to drop by around 16 percent in 2019.

"This announcement comes at bad time for the Icelandic tourism sector, which is now preparing for the high season," Gudjonsson said.

Arion is now predicting a 1.9 percent drop in gross domestic product as a result, although his colleague Jon Bjarki Bentsson at Islandsbanki was less gloomy.

"The krona has already weakened some 11-12 percent, and measures have already been taken both within the companies and by the government to react," Bentsson said.

Finance Minister Bjarni Benediktsson said the government was prepared to consider measures to bolster the industry. On Thursday, it issued a statement saying the economic effects would be limited to the short term.

"Our tourism sector has untapped opportunities for the future and we are capable of reacting to this kind of a blow," Benediktsson told local television network RUV.

Connections to North America could be worse hit by Wow's collapse, although Icelandair, which serves more than 20 locations in the U.S. and Canada, would be expected to pick up the slack.

Wow is the latest in a string of failures affecting European airlines.