As Xbox Taps CP+B for Fall Campaign, A Look Back on the Work | Ad Age
Skip to main content

As Xbox Taps CP+B for Fall Campaign, A Look Back on the Work

Ad Age reported yesterday that Microsoft Xbox has shaken up its agency roster, bringing in MDC Partners' Crispin Porter & Bogusky to create a fall campaign for the console. The agency could not confirm whether or not the campaign will involve the next gen Xbox 720, which the gaming industry has speculated is poised to launch around that time.

Until this point, Xbox has asserted its presence with ambitious multiplatform campaigns created out of Twofifteen McCann, formerly known as T.A.G. and AKQA. Twofifteen will remain agency of record and will handle work for products and various titles such as "Halo," while AKQA will be replaced by Razorfish as digital agency of record.

Below, take a look back at some of Xbox's notable marketing moves over the years.

Seems like ages ago when in 2005 Microsoft introduced the Xbox 360 via an integrated campaign out of a multiple agency team consisting of McCann Erickson San Francisco, 72andSunny, AKQA and design shop JDK. The campaign's spots, directed by Frank Budgen, took a decidedly lo-fi approach centered on gaming in the real world and featured a massive water balloon fight and an extreme double dutch set. The idea was to invite consumers of the world to "Jump In" to the social world of online gaming--a unique console gaming feature, at the time.

The 2006 spot launching Epic Games title "Gears of War" introduced a refreshing emotional, human take on videogame advertising, setting the tone of much of the work to follow out of McCann/T.A.G./twofifteen. Instead of focusing on the ravages of gameplay, the spot shows the softer side of soldier Marcus Fenix as he explores the game's post-apocalyptic landscape, set to an affecting cover of Tears for Fears' "Mad World." Director Joseph Kosinski worked with effects shop Digital Domain and Xbox to create the spot within the "Gears" game engine.

Arguably, the most notable accomplishments from the T.A.G.-AKQA tag team have been for the title pushes. The best example of that was, no doubt, the much celebrated "Believe" campaign from 2007 promoting the launch of "Halo 3." The campaign took a History Channel-inspired approach to exploring the legend of the game's iconic hero, Master Chief. Stan Winston Studios created a massive diorama of a key battle scene from the game, which became the focal point of Rupert Sanders-directed TV spots and an online experience that allowed players to explore every detail of the "historic" event. Additional films featured old war vets looking back on the struggle.

In 2010 to promote "Halo Reach," the prequel to the Halo franchise, AgencyTwoFifteen launched what at the time was the title's most ambitious campaign to date. The multiplatform effort included a Noam Murro-directed short film, "Birth of a Spartan" announcing the game's beta and another short, "Deliver Hope," which depicted the sacrifice of the Spartan Noble Team as they defended their planet Reach from Covenant invasion. The campaign also featured an AKQA-created site whereby visitors could control a real-world robot to create a monument of light in memory of fallen Spartan soldiers, as well as a series of live action webfilms.

To introduce a new Halo trilogy out of 343 Industries, Twofifteen McCann debuted "The Commissioning" at E3 last summer. Directed by MJZ's Nicolai Fuglsig, the film sees the Halo universe enjoying a four year respite for war--until it comes under attack by a new enemy. 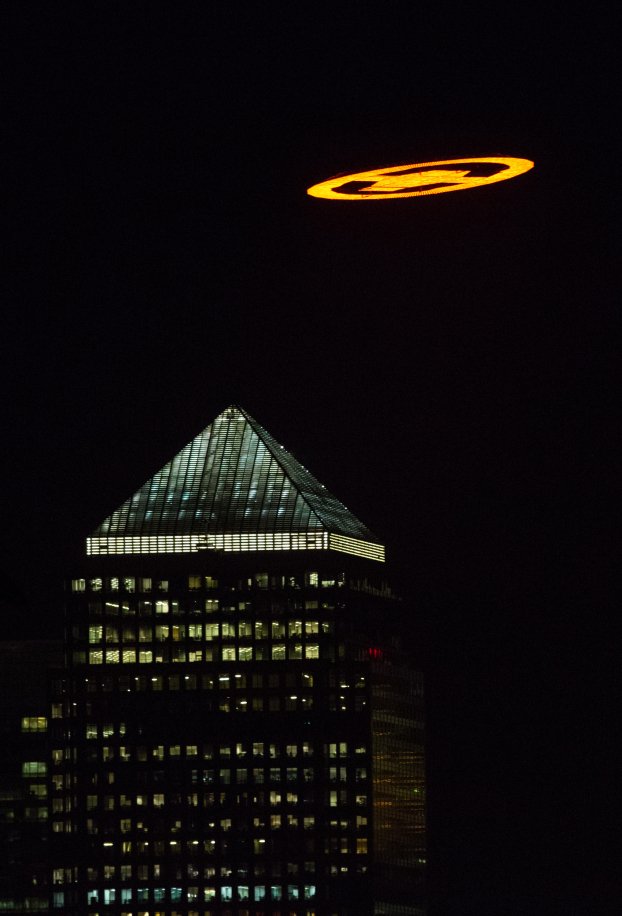 To help promote the launch of "Halo 4" in the U.K., AKQA sent a UFO into the night sky. A helicopter flew an illuminated 3.2-ton, 50-foot diameter illuminated "Halo Glyph" over London, above the River Thames from Greenwich Peninsula to Tower Bridge. The agency worked with Cinimod on the lighting art, while Twofifteen led overall strategy and creative.

The capstone of the "Halo 4" push was Twofifteen's epic short "Scanned." Launched last fall, it explores the origins of Master Chief, from his days as a young boy named John-117 to his involuntary recruitment into the Spartan army when he endured the physical enhancements that transformed him into a legendary warrior. The film was produced by David Fincher out his new production company Reset, and Tim Miller, the man behind the gorgeous titles of Fincher's "Girl With a Dragon Tatoo," directed.