The rocker recently posted an ad for Vanity Fair napkins to Instagram, after missing out on the other Vanity Fair's Oscar party
READ THIS NEXT
10 latest creative trends in the time of coronavirus 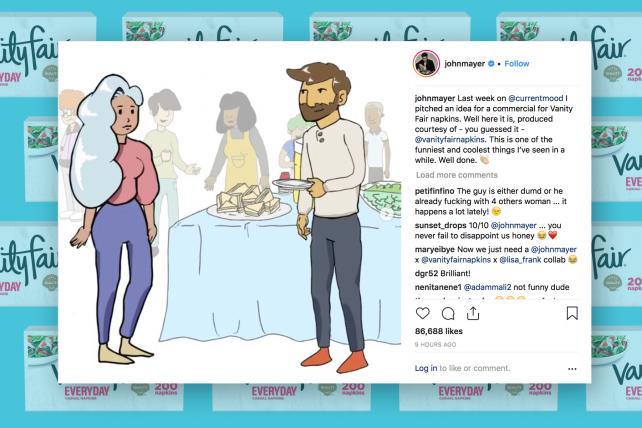 If John Mayer isn't receiving as much love as he'd like from Vanity Fair magazine, at least he is from the napkin brand of the same name.

Mayer reportedly threw his own "fake Vanity Fair" Oscars party after he was unsure whether he had an invite to the famous annual shindig. Now it looks like Mayer has parlayed that into a new side hustle: inspiring creative for Vanity Fair napkins.

On Monday Mayer posted an ad for the napkin brand, which was created by them after he discussed the idea on his Instagram Live talk show, Current Mood.

Last week on @currentmood I pitched an idea for a commercial for Vanity Fair napkins. Well here it is, produced courtesy of - you guessed it - @vanityfairnapkins. This is one of the funniest and coolest things I've seen in a while. Well done. 👏🏼

Apparently, Vanity Fair napkins--which is not affiliated with the Condé Nast magazine, or the lingerie brand--liked it so much that they produced the commercial and posted it to their Instagram with the caption: "Brilliant idea courtesy of #NapkinInfluencer and Creative Director, @johnmayer. 🙌"

The animated ad features a character, who resembles a bearded John Mayer, asking a woman for her number. When she offers to write it on a Vanity Fair napkin, he laments "If you're going to deface Vanity Fair napkins, I don't think I want it anymore."

Melissa Kinard, communications manager for Vanity Fair, and a personal fan of John Mayer, had seen the video of his faux Vanity Fair Oscars party and his idea for the ad while watching Current Mood.

"It's obviously very silly. But we thought that would be a really fun opportunity for us to make that come to life," she says. "For us a brand and as a company, this kind of personalization is a key strategy for how we want to communicate with consumers of any kind, so this was a really fun opportunity for us to really take that personalization to another level."

If Mayer keeps pitching gems like this, then maybe he'll finally earn that official invite to next year's Oscar party. Until then, the Napkin Influencer title will have to do.