How internet marketers, from Amazon to Uber, are driving growth in global ad spending | Ad Age
Skip to main content
Sign In Register

How internet marketers, from Amazon to Uber, are driving growth in global ad spending

Procter & Gamble reclaims top spot in Ad Age World’s Largest Advertisers, while China-based advertisers are moving up the ranks of global spenders
READ THIS NEXT
Why the Great Resignation shows no signs of slowing down: Datacenter Weekly
Credit: iStock

The world’s 100 biggest advertisers boosted ad spending by 4.5 percent to a record $291 billion in 2018, powered by internet marketers.

Amazon moved up two slots to take the No. 5 spot among global advertisers with ad and promotion spending of $8.2 billion. Based on Amazon’s spending growth (with stated marketing spending surging 43 percent in the first nine months of 2019), Amazon could rank as the world’s biggest advertiser when Ad Age produces its next global ranking a year from now.

For this year’s report, Procter & Gamble Co. reclaimed the No. 1 spot even as its estimated advertising and other marketing costs fell 3.9 percent to $10.1 billion in the fiscal year ended June 2019.

Samsung scored No. 1 in the ranking a year ago, which marked the first time P&G wasn’t on top in worldwide spending since Ad Age began the global ranking in 1987.

The ranking comes from Ad Age Datacenter’s all-in assessment of a company’s reported or estimated total spending on advertising, marketing services (including promotion and direct marketing) and digital marketing (including social media).

Walmart, the world’s biggest company by revenue, ranked No. 25 in ad spending. The retailer last year spent a record $3.5 billion on advertising, but that’s still a comparatively low 0.7 percent of its $510 billion net sales.

The World’s Largest Advertisers ranking includes a roster of global marketers, from P&G to No. 100 Dell Technologies ($1.1 billion), with spending increases at 60 of the companies.

Personal care and household products was the biggest category among the World’s Largest Advertisers list with 14 marketers spending $50 billion, up just 0.8 percent. Automotive was second with 15 automakers spending $45 billion, down 2.5 percent as companies tightened spending.

The top 100 includes 47 companies based in North America, 29 in Europe, 23 in Asia and one in Latin America (America Móvil, parent of wireless service brands Claro, Telcel and Tracfone). 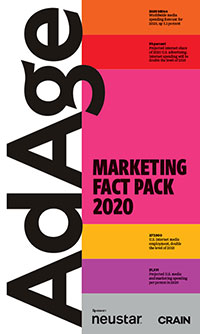 Total worldwide advertising spending encompasses advertising, marketing services (including promotion and direct marketing) and digital marketing (including social media). Figures are based on calendar 2018 results or, for companies on fiscal years, the most recent fiscal year ended on or before June 30, 2019. Ad Age translated currencies to U.S. dollars at average exchange rates.

© Copyright 2019 Crain Communications Inc. The data and information presented is the property of Crain and others and is protected by copyright and other intellectual property laws. For personal, noncommercial use only, which must be in accordance with Ad Age’s Terms and Conditions at AdAge.com/terms. Archiving, reproduction, redistribution or other uses are prohibited.

Why the Great Resignation shows no signs of slowing down: Datacenter Weekly