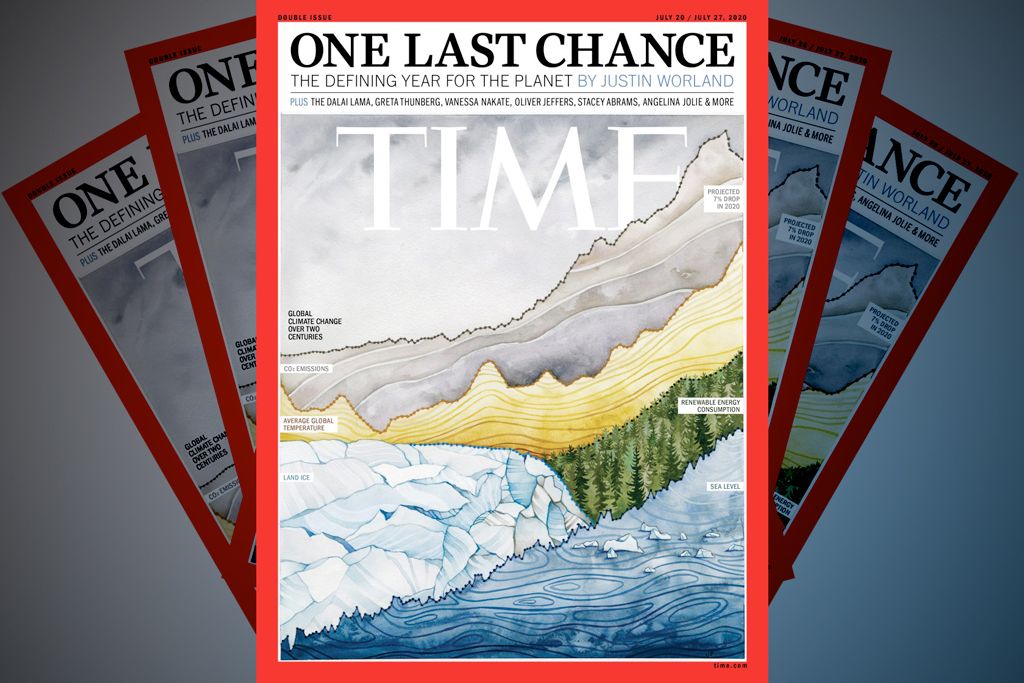 Look closely at this cover.

The latest unemployment data in context

“Weekly jobless claims were lower than expected last week as workers slowly returned to their jobs in the wake of rising coronavirus cases,” CNBC reports, citing U.S. Department of Labor data released this morning. “Claims for the week ended July 4 totaled 1.314 million, compared with the 1.39 million expected from economists surveyed by Dow Jones.”

More context: “The numbers of new unemployment filings have remained above a million each week since the pandemic began mid-March,” per The Washington Post.

The brands that rule advertising

You’re already a Datacenter subscriber, right? You really are missing out if you aren’t.

The art of data

The illustration on the cover of the July 20-27 issue of Time magazine (above), on newsstands Friday, is actually a data visualization. As Time’s Creative Director D.W. Pine writes in a note to readers,

For this week’s special issue, “One Last Chance,” we turned the cover over to a young artist and scientist who painstakingly created a vibrant landscape of key global climate change indicators. Maine artist Jill Pelto, 27, who incorporates scientific research and data into her watercolor paintings, often in the field, weaves visual narratives that reveal the benefits and costs of human impacts on this planet. ... The cover image incorporates global data on CO2 emissions (1880-present), including the projected drop due to COVID-19, average global temperatures (1880-present), renewable energy consumption (1965-present), land ice volume (1960-present) and sea level rise (1880-present).

According to data shared exclusively with Ad Age Datacenter Weekly by iSpot.tv, major marketers are taking to TV in a big way as the American economy continues to reopen (in fits and starts):

• Of the top 50 brands by impressions, 43 showed week-over-week increases, and 36 of those grew by at least 25 percent.

One caveat: Increased impressions doesn’t necessarily correlate to increased spending, as some advertisers may be electing to advertise more heavily during cheaper programming and dayparts.

The headlines surrounding short-form video service Quibi are rather grim at the moment. See, for instance, “More Than 90% of Quibi Users Reportedly Bailed After Free Trial” (Gizmodo) and “Abysmally few people are subscribing to Quibi, analytics firm says” (CNN Business).

But here’s a story that actually includes Quibi’s pushback right in the headline: “Quibi Converts Just 8% Of Free Trials To Paid Subscriptions, Report Says; Company Rips It As ‘Incorrect By An Order Of Magnitude’,” per Deadline.

Some context: The analytics firm behind these stories is Sensor Tower, which is essentially making educated guesses based on external signals it can track, given that Quibi isn’t releasing paid-subscriber numbers—except to say that it is witnessing “excellent conversion to paid subscribers.”

Since the previous edition of this newsletter was published right before the July 4 holiday weekend, you may have missed it. Here it is: “The No. 1 reason to return to the office, Pride in retrospect, and leaky Facebook data: Datacenter Weekly.”

• “COVID-19 Cases Are Rising, So Why Are Deaths Flatlining?” per The Atlantic.

• “3 ways to keep your devices, yourself and your data safe during COVID-19,” per Fox Business.

• “What Counts as a Streaming Hit? A Start-Up May Have Answers,” The New York Times reports.

• “8 ways businesses can prepare for users regaining control of their data,” via the Ad Age Collective.