A Rising Data Star Enjoys the Dark Side

“Three years ago I went to the dark side.”

And by “the dark side,” Claudia Perlich means advertising.

The data whiz joined ad targeting firm Media6Degrees in 2010, where she and her small team of data crunchers build thousands of algorithms every week to help advertisers reach people those models suggest are likely to buy their products.

But as far as she is concerned, aligning with the netherworld of pushing products is a lot less stressful than other data gigs. “One thing I really like about advertising is I sleep well at night,” she said, noting she doesn’t have to worry she’s built a faulty model for predicting lung cancer. 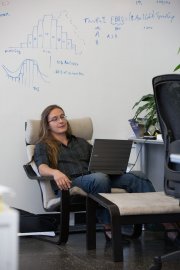 “If you’re wrong you don’t hurt anybody.”

This February the statuesque Ms. Perlich, 39, presided over the first meeting of her Data Science for Business class at NYU Stern, dressed in her standard garb of jeans and a t-shirt. This shirt bore the logo of data platform MapR, declaring, “Data Tells the Story.”

“I don’t expect you all to become data geeks,” she insisted. “This is about managing people who are really good with data.”

Ms. Perlich has a prestigious background for an adjunct professor. She’s won three Knowledge Discovery and Data Mining awards from the Association for Computing Machinery's Special Interest Group -- known among data scientists as the KDD Cup: In 2007, for her work on predicting movie popularity for Netlfix; in 2008, on breast cancer identification; and in 2009 on predictions for telecommunication consumers. She now acts as a chair for the annual event, which will be held in Chicago this summer.

Ms. Perlich still recognizes the importance of things she learned years ago. For instance, during one of her NYU classes she told students the algorithms she uses today are the “bread and butter ones” she learned 15 years ago. “What’s really changed is the granularity of the data,” she said.

It probably helps that she had a world renowned data scientist for a mentor -- Andreas Weigend, best known for his previous position as chief scientist at Amazon.com. “He got me into the data business,” she said, noting the two are still friends.

Ms. Perlich studied neural networks with Mr. Weigend; it was her initial experience building data models. “People thought, let’s build something that looks like a brain,” she said.

Today, Mr. Weigend lectures at Stanford University, where he heads up the school’s Social Data Lab.

Like Mr. Weigend, Ms. Perlich has roots in Germany. She grew up in East Germany, and was a teenager when the Berlin Wall was toppled. After obtaining an undergrad degree from Darmstadt University near Frankfurt, she moved to the states to study at the University of Colorado at Boulder, where she got a Masters in Computer Science.

Ms. Perlich went on to intern at IBM, and there was able to play around with Deep Blue, the computer made famous for besting Russian chess master Gary Kasparov in 1997. Rather than studying the game of kings, Ms. Perlich used the computer to analyze treasury bond data.

She returned to Germany to get her Phd, then came back stateside to join IBM Research in 2003.

At New York-based Media6Degrees, Ms. Perlich and her team come up with predictive models that assign dynamic scores representing the likelihood of users visiting websites to buy certain products. When a score reaches a particular threshold, that user cookie is updated. So, rather than targeting against audience segments, M6D targets against predictability.

Back in the basement classroom at NYU Stern’s Tisch Hall at the end of the semester earlier this month, Ms. Perlich’s 50 or so students -- mostly men of varying ages – nervously straightened ties and discussed the finer points of public speaking. It was final presentation night, and most had grasped enough about predictive modeling to present relatively sophisticated reports on topics such as baseball analytics for gauging player prowess, and the causal relationships between educating doctors about pharmaceutical products directly, and the increase in prescriptions of those drugs.

“I’m sure the last week has been intense for some of you,” she said with a smirk at the beginning of class. But she told everyone not to worry: There would be pizza delivered soon.