The call marked the first use of LinkNYC, the 10-foot-tall obelisks that on top of offering free digital calls, the mayor said, would blast out "the Wi-Fi network New York City deserves—the biggest and fastest in the world and completely free-of-charge."

New York's private partner, CityBridge, would replace old pay phones with a modern network of 7,500 kiosks spread throughout the five boroughs, offering free Wi-Fi, phone calls and USB charging ports—all paid for with digital advertising dollars, of which the city would get a cut worth hundreds of millions of dollars over a decade.

But almost halfway through the 15-year contract between the city and CityBridge, the vendor fell behind nearly $60 million on payments to the city and had installed fewer than 2,000 kiosks. The majority have gone to wealthy neighborhoods in Manhattan and Brooklyn, failing to address disparities in internet access among the city's richest and poorest neighborhoods. The last new Link went live nearly three years ago.

In the coming months, CityBridge will try to revamp the program after reworking its deal with the city. New and potentially much taller Links should begin appearing early next year, sporting equipment designed to blast out the next-generation 5G cellular network, the rollout of which business leaders have identified as crucial to New York's post-pandemic recovery.

But this is not the first time CityBridge has made promises to fix the program, and the plan is not without risk. It relies on a technology not yet adopted on a wide scale anywhere in the U.S. and will need to win approvals for a design that could bring the Link to three times its height (more akin to streetlamps) from a local review commission that has a history of being dubious of cellular equipment.

The conflict between the city and CityBridge came to a head at a City Council budget hearing in March 2020, days before the pandemic took hold of the city.

The city's chief information officer, Jessica Tisch, testified that CityBridge owed the city $75 million in revenue-sharing payments dating back to 2018 and had not built new Link kiosks for almost two years.

"What I understand is they're crying poor," said Tisch, who was appointed commissioner of the Department of Information Technology and Telecommunications in 2019. "Our patience is up."

By then, it had been six years since the city awarded the contract to CityBridge, which is operated by a digital advertising startup called Intersection, which counts Sidewalk Labs (an offshoot of Google parent company Alphabet) as an investor. Sidewalk Labs CEO Dan Doctoroff, who spent six years in the Bloomberg administration, described the project as a pioneer for urban technology.

"We expect to make a lot of money from this, but at the same time, we want to solve big problems," Doctoroff said in 2016 at an event hosted by The Information. "In this case the big problem is digital inequality. In New York City, there are three million people who do not have access to broadband."

But by the time of the hearing last year, the biggest problems came down to money and access.

In the Bronx, where 38% of households lack a broadband connection, there are only 137 active Links, according to an audit released by state Comptroller Thomas DiNapoli in July. In Manhattan there are nearly 1,200.

More than 70% of ZIP codes in Queens and Staten Island do not have a single LinkNYC kiosk, according to DiNapoli's report, compared with just 26% of the ZIP codes in Manhattan.

With the Links funded by ad revenue, CityBridge appeared to focus on areas with the most foot traffic and ability to deliver eyeballs to its ads.

On top of failing to construct the number of kiosks it promised, CityBridge had only paid $2.6 million toward $32 million in the minimum ad revenue-sharing payments it owed the city in 2019 and had offered zero toward the $44 million owed for 2020.

Tisch threatened to hold CityBridge in default of its contract, potentially removing the company entirely. CityBridge, meanwhile, said in its own statement that its work to resolve problems with the program had been met with "silence and delay" from the city.

The consortium was facing increased competition for the digital out-of-home advertising market and was beset by logistical headaches in trying to find sites for the Links, in part because of the city's strict rules. It had been trying to get the city to rework the deal.

"Many aspects of the LinkNYC program were unprecedented when the original franchise was written in 2014—from its massive scale to the speed of its free public Wi-Fi to its complexity," Nick Colvin, CEO of CityBridge, said in a statement to Crain's.

The city was close to kicking CityBridge out and starting over, but the pandemic changed the equation for the city, Tisch said in an interview.

Rather than let LinkNYC's kiosks go dark at a time when the city had enough problems to deal with, the two sides began reworking the deal. ZenFi Networks, a telecom equipment provider, was prepared to invest $200 million to restart LinkNYC construction efforts, with the intent to install 5G equipment on the kiosks it could lease to Verizon and AT&T.

But first CityBridge needed to be let out of revenue-sharing agreements that were built on assumptions called "wildly unrealistic" even by Tisch.

Under the new franchise agreement, CityBridge is required to share 5% of expected ad revenue—about $160 million over the life of the 15-year deal, compared with $750 million in the first agreement. In exchange, the company must build at least 2,000 kiosks outside Lower Manhattan and Midtown in the next three years—and pay back what it owes.

"This deal allows the LinkNYC program to continue to serve New Yorkers while prioritizing build-out in underserved areas, helping us close the digital divide," said Laura Feyer, a spokeswoman for the mayor.

The agreement was approved by the city's franchise review committee in June, after which CityBridge paid $27 million to the city.

Much of the talk around 5G is still hype, but what is known about the network is that it will require a lot more cellular equipment than the current 4G. The speediest part of 5G uses a radio spectrum known as millimeter wave, which carries data at higher speeds but for shorter distances than the 4G network.

The cellular industry will spend at least $275 billion building the 5G network in the next five years, according to estimates from industry group CTIA. That includes the small-cell base stations that companies such as ZenFi build to host signals along urban streets—including on LinkNYC kiosks.

"A huge issue for the industry is the lack of infrastructure for small-cell deployments," said Sundeep Rangan, associate director of the NYU Wireless research center. "Improving access to this infrastructure is probably the biggest thing a city can do to get better wireless service."

ZenFi CEO Ray LaChance said LinkNYC's expansion could help not just by providing Wi-Fi and 5G on the kiosks, but by laying new fiber in the ground to serve areas outside Manhattan. That wiring could be used by independent providers to offer internet options in areas where service is currently limited.

"The more fiber, the more opportunities for competitive broadband offerings within a given neighborhood," LaChance said.

CityBridge and ZenFi hope to have new kiosks installed starting early next year—meaning the next mayor will have to oversee the effort.

Before then, the LinkNYC effort has at least one administrative hurdle to clear. The new cellular equipment on the LinkNYC kiosks may need to rise up to 32 feet, towering above the current 10-foot-tall kiosks. It needs to reach the same height as light posts. 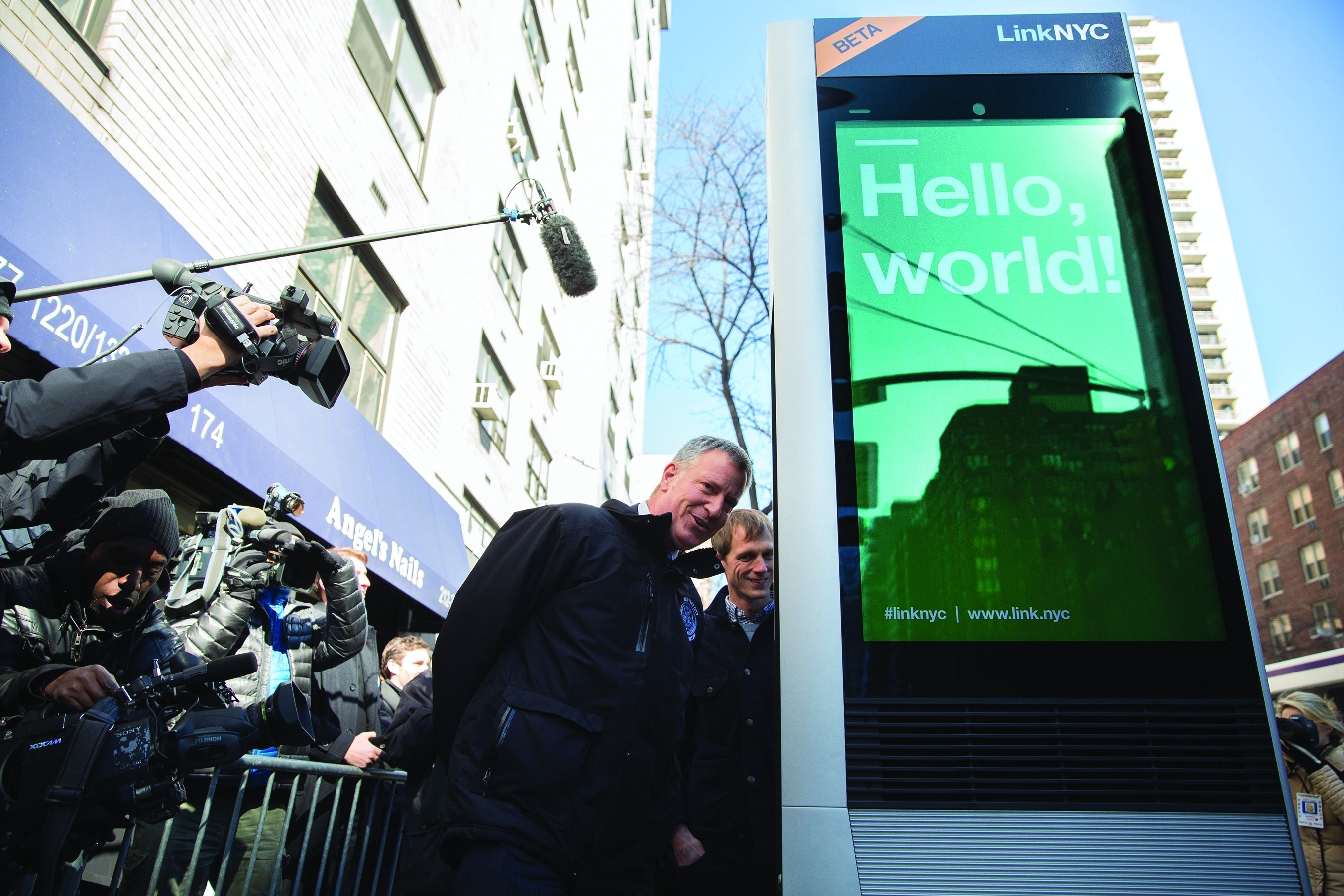 de Blasio at the unveiling of a LinkNYC kiosk

It is not clear what that will look like yet, although Tisch said the advertising screen would not change in size. The new look will require approval from the city's Public Design Commission, which last year barred 5G equipment from being applied to certain street pole types, citing their historical design significance.

This is the second time the LinkNYC contract has been revised. CityBridge was given more time to deploy kiosks through a 2018 revision—which it still missed. The City Council initially held hearings in 2016 and 2018, when problems with the build-out of kiosks cropped up, but CityBridge's money problems appeared to catch councilmembers by surprise at the 2020 hearing.

"I understand if there is skepticism out there—I expect there will be," Tisch told Crain's, when the amended contract was first revealed. "But in my mind, these elements are all coming together in a realistic way."

The City Council will watch the effort closely and hopes to have a say in where future Link kiosks land, said Councilman Robert Holden, chair of the Committee on Technology.

"They were dealing with a new frontier in tech at the time, and this was a big mistake, these initial projections, but I think the city is making the best of the situation," said Holden, who represents parts of central Queens.

Eye on the ball

Michael Samuelian, director of the Urban Tech Hub at Cornell Tech and a former city planner, said the agreement is rightly focused on distributing the tech, rather than capturing maximum revenue.

"But oversight will be the key," Samuelian said. "Whenever there is this private provision of a public asset, you have to keep your eye on the ball."

Greta Byrum, co-director of the Digital Equity Laboratory at the New School, defended the project's mission of closing long-existing gaps in internet access.

"The de Blasio administration was trying to address generations of underinvestment from telecom providers who held the franchises forever in New York City," Byrum said. "This was an ambitious project to address those shortcomings—which itself had some shortcomings that we can learn from."

The events that set LinkNYC into motion date back beyond the de Blasio administration to Mayor Michael Bloomberg. The city had about 10,000 phone booths as of 2012, and the 13 separate franchise agreements that allowed companies to operate payphones in the city would expire in 2014. In the final year of his third term as mayor, Bloomberg launched a competition to "reinvent" the payphone.

One of the winning options—from architecture firm Sage and Coombe—envisioned a ten-foot-tall kiosk with a digital touch screen that blasted out free Wi-Fi, called NYFI.

In his first year in office, Mayor Bill de Blasio built off that effort through a competitive bid seeking companies ready to replace payphones with free Wi-Fi kiosks. Later that year, the mayor revealed that the consortium CityBridge had won a competitive bid for the project.

A year later, Sidewalk Labs, an independent tech company owned by Alphabet, purchased and then merged Titan and Control Group, forming Intersection, which remains today the manager of the LinkNYC system.