With LinkedIn Stories shuttered, the networking platform is turning its attention to live events to build its place in the creator economy.

LinkedIn is debuting a new feature today that allows LinkedIn's 2,500 instructors to host live events through LinkedIn Learning, a platform LinkedIn launched in 2016 after acquiring online resources website Lynda.com for $1.5 billion. "Office Hours" is designed to entice creators and experts in their respective fields, hoping to cater to those who are rethinking their place and values in the workforce during the pandemic. as part of what LinkedIn has called “The Great Reshuffle.” LinkedIn users can apply to become instructors by sharing their past teaching experience or what qualifies them to teach certain subjects.

Previously, only members who subscribed to LinkedIn Learning for $29.99 a month could tune in to the courses, but “Office Hours” events—video content across a range of subjects and question and answer sessions—will be free for all LinkedIn users. Viewers tuning in can participate through reactions, comments and polls.

Jonathan Rochelle, VP of product management at LinkedIn, says participating in “Office Hours” can “significantly increase” creators' presence on the platform. LinkedIn has been testing the new feature among select LinkedIn Learning instructors such as Kim Kaupe, founder of Austin-based creative agency Bright Ideas Only, who now every Wednesday hosts a live “Coffee with Kim” video session about personal development, marketing, business and entrepreneurship. Since starting “Office Hours,” Kaupe’s viewership has grown by 60%, according to LinkedIn. So far, sessions range from teaching soft skills like employee well-being and career development to specific skills like coding and video production. 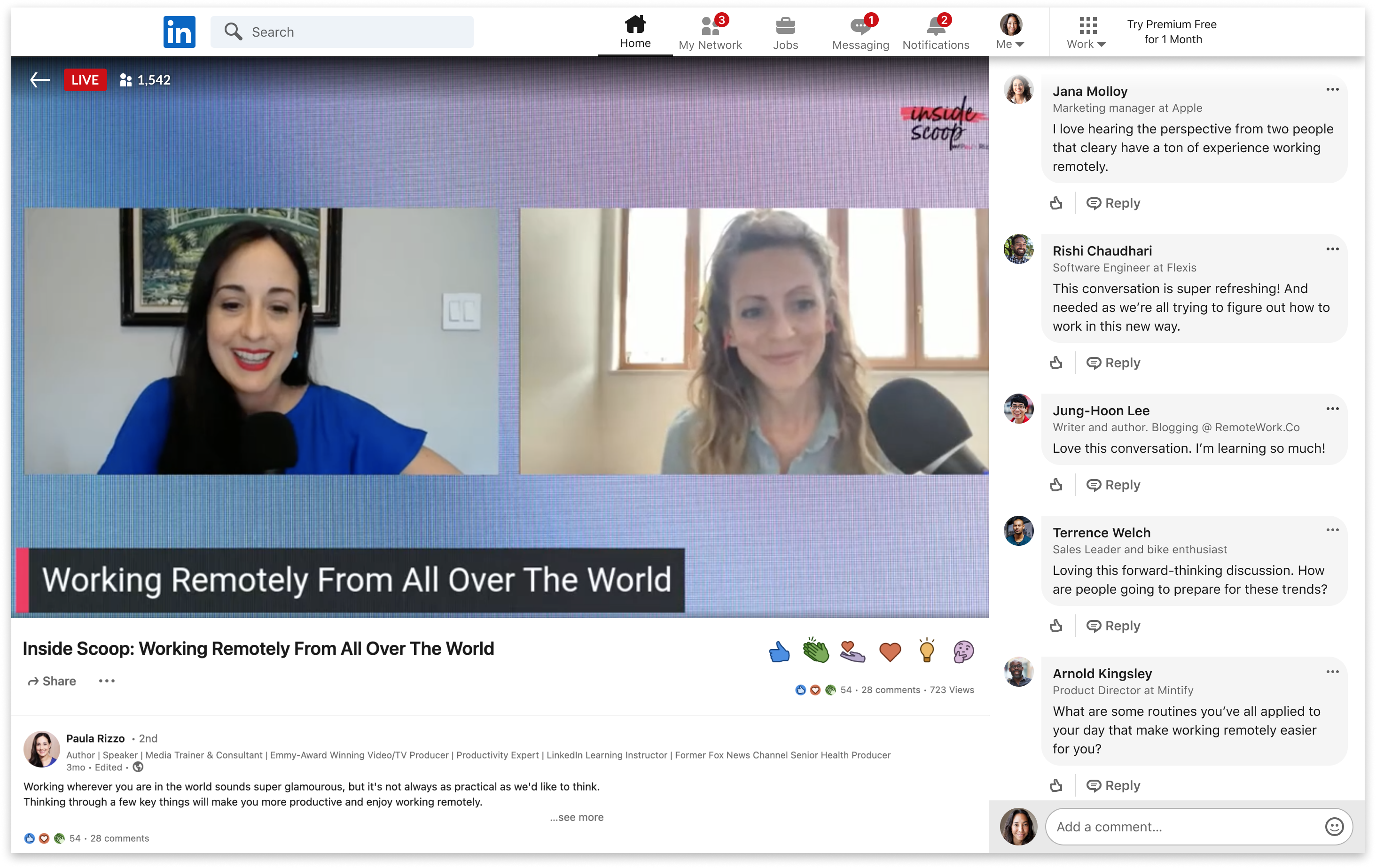 The announcement comes a day after LinkedIn said it would shut down Stories, the platform's ephemeral video feature inspired by social apps like Instagram and Snapchat due to a lack of appetite among users. “Turns out, you want to create lasting videos that tell your professional story in a more personal ways that showcase both your personality and expertise,” wrote Liz Li, senior director of product at LinkedIn, in a blog post on Monday. LinkedIn said it is working on a new in-feed video experience. "Office Hours" also caters to that consumer desire for lasting video because the events remain available on the platform even after they end.

The feature is also another way creators can make money on the platform, beyond working with brands to sponsor posts. Instructors are paid royalties based on the amount of people who tune in or use their content. LinkedIn did not say how much it pays in royalties.

“Office Hours makes it easy for instructors to build their audience—their learners—in an authentic and personal way,” says Rochelle. “We hope this tool will empower instructors to drive deeper engagement, grow their community of learners,  build their brand and increase eyes on their courses—which is how they earn money.”

“Office Hours” is part of LinkedIn’s efforts to attract both social media creators who are using LinkedIn to grow their individual businesses, as well as industry professionals looking to become creators themselves, says Keren Baruch, group product manager, creators at LinkedIn. Although user-generated content has existed on the platform since 2012, roughly 10 years after the platform first launched, she says content has increasingly become a central part of the professional experience and “creators are really at the heart of that.” Baruch says LinkedIn saw a 29% year-over-year increase from 2020 to 2021 in the amount of content shared to the platform.

Creators already have access to LinkedIn's live video service, newsletters and analytics to see how their content is performing. LinkedIn is also gearing up to launch Audio Rooms, where creators can host live rooms to chat about various topics, similar to the audio app Clubhouse. LinkedIn says that feature is coming "soon."

“This is a place where creators can really advance their career,” says Baruch. “They’re building an audience, but they’re also building their own professional goals.” Baruch says LinkedIn defines creators as users, organizations and companies who regularly share content with the professional community to build their reputation, grow their business and empower and educate others.

LinkedIn first began leaning more aggressively into creators in March 2021 with the launch of the platform’s Creator Mode, which reorganizes users’ profiles to let content stand out and put the topics they post about in hashtag form at the top of their profiles. It also allows people to “follow” creators to see their posts rather than “connect” with them directly.

Baruch says that in the future, users with Creator Mode setting will better inform LinkedIn’s algorithms and search tools to surface their content and profiles. Users with the Creator Mode will also be granted first access to new creator tools, features and programs.

Over the past year, the platform has also built an internal creators community management team that aims to help creators with content creation and management, while also learning what kind of features and tools they want to see on the platform. The scope is international as well; LinkedIn is currently searching for more than 20 creator managers across the U.S., Brazil, France, U.K. and India.

Even creators that are finding success across other social platforms are now turning to LinkedIn as yet another platform for engagement, and they are bringing brands along for the ride. Kevin Parry, for instance, is a creator who is now trying to build up an audience on LinkedIn to add to his 1.9 million TikTok followers, 1.3 million Instagram followers and 935,000 YouTube followers, who tune int o his stop-motion animations. In videos seeing millions of views, he transforms himself into objects like a banana or balloons or explains how he makes videos where he appears to levitate or burst into flames.

That might come as a surprise to some, but in the creator economy, where large followings have converted into viable businesses of creating content sponsored by brands, developing a name for yourself on Microsoft’s LinkedIn with its 774 million members, only makes marketing sense. Over the past year, Parry has grown to 56,080 LinkedIn followers and is partnering with brands like Logitech to sponsor his work on the platform. When LinkedIn saw the success of some of Parry’s posts, they reached out and are now working with him directly.

While LinkedIn isn’t pairing creators with brands like other creator-driven platforms just yet, it’s not too far of a stretch. “I can’t speak to the future there but we know how important reaching those goals are for creators so we’re continually building and understanding,” says Baruch.