Amazon may have pulled its HQ2 plans, but it still has New York digs | Ad Age
Skip to main content
Sign In Register

Amazon may have pulled its HQ2 plans, but it still has New York digs 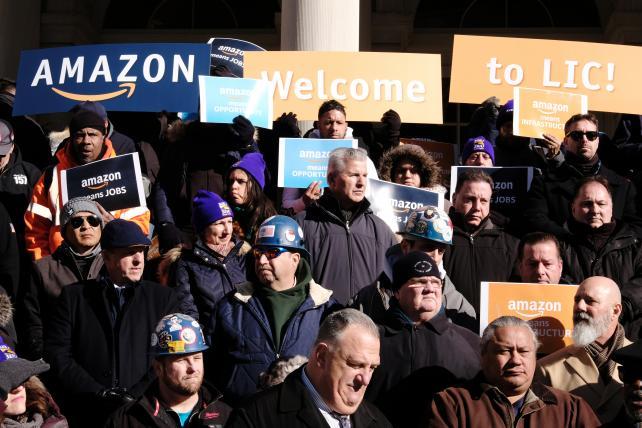 Protests kept Amazon from its new base in New York, but it still has offices in the city.
Credit: Bloomberg

New York, Amazon loves you but you're bringing it down.

On Thursday, the Seattle-based e-commerce giant announced that it would withdraw plans to place its second headquarters in Long Island City, after the company faced a wave of protests.

The Amazon hub would have been the company's most important headquarters outside of its west coast hometown. Opponents, led most notably by U.S. Rep. Alexandria Ocasio-Cortez, objected to the generous tax package and the opaque process that lured Amazon to the city.

The change of plans raised questions about what happens now to the rest of the operation, particularly its ad business, which has already been putting down roots across the river in Manhattan.

"Amazon has a strong advertising presence in their new Hudson Yards office, and I had expected that team to remain there for the duration of their lease, anyway," says Will Margaritis, SVP of e-commerce at Dentsu-Aegis Network. "It's the hub of all their advertising."

Amazon declined to comment for this story, but it did post an announcement online Thursday that said: "There are currently over 5,000 Amazon employees in Brooklyn, Manhattan, and Staten Island, and we plan to continue growing these teams."

Amazon does not disclose how many people are dedicated to the advertising team alone. The company has been growing the ad portion of its business, developing technology so brands can automate campaigns that run on Amazon and off the e-commerce site. The ad platform side of the business generated more than $10 billion in 2018, which was up from about $3 billion in 2017.

To drive that growth, Amazon has had to forge new ties with brands and ad agencies, providing tech and services that help them understand how to buys ads on its platform and keep up with all the changes.

Andrew Lipsman, principal analyst at eMarketer, which keeps up with all of Amazon's ad innovations, says he expects the company to keep investing in New York because of how important the city is to its business.

"I'd be very surprised if we don't see the company significantly grow its presence there in the coming years," Lipsman wrote in an analyst note on Thursday. "Amazon's continued emergence as a media and advertising powerhouse will make it increasingly critical to have a strong physical presence at the nexus of these industries."

Still, the Long Island City headquarters was set to deliver 25,000 jobs and be an innovation center for one of the most valuable companies of all time. Advertisers and marketing technology companies could have taken advantage of being so close to a space that showcased Amazon's latest products and services.

"It would have been interesting to have either retail or tech teams here, as well, to be able to partner closer with them," Margaritis says.