Apple Gets Beats for $3 Billion. Here's Why They Should Keep It Ad-Free | Ad Age
Skip to main content

Apple Gets Beats for $3 Billion. Here's Why They Should Keep It Ad-Free

There Are Compelling Reasons Not to Insert Advertising 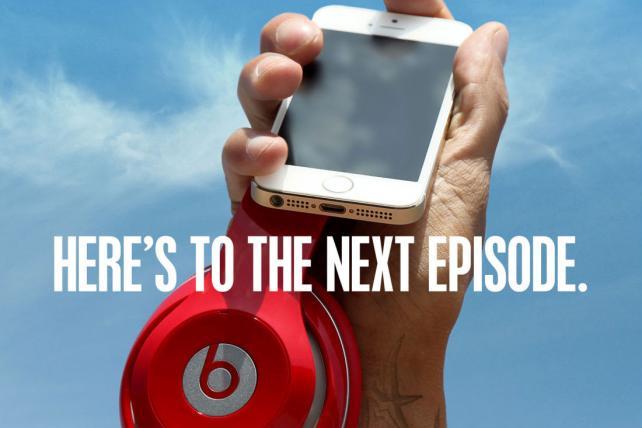 Apple has agreed to buy headphone maker and streaming music service provider Beats Electronics for $3 billion, the company announced on Wednesday. Beats co-founders and music moguls Jimmy Iovine and Dr. Dre will join Apple as part of the deal.

News of the acquisition first leaked weeks ago and spurred speculation over Apple's motivations. With celebrity spokespeople including LeBron James and Nicki Minaj, Beats has cultivated the type of "cool" brand image commonly associated with Apple but that some consider to be on the wane since former Apple CEO Steve Jobs passed away.

It also has developed a piece of hardware-as-fashion that could play well into current Apple CEO Tim Cook's stated plan to enter the wearable-devices arms race.

And then there's the streaming music service.

"The addition of Beats will make our music lineup even better, from free streaming with iTunes Radio to a world-class subscription service in Beats, and of course buying music from the iTunes Store as customers have loved to do for years," said Apple Senior VP-Internet Software and Services Eddy Cue in a company announcement.

Apple re-made the music industry with iTunes, iPod and the $0.99 single. However, sales from digital music downloads are on the decline, cannibalized by the rise of streaming music services. In the past year, U.S. music streams have risen 32% while industry-wide digital song sales have fallen by 6%, according to influential tech investor Mary Meeker's latest internet trends report.

Apple was slow to adapt to the streaming shift and has spent the past year trying to catch up. Last year the company launched iTunes Radio to rival Pandora. Now it has bought Beats Music to face-off with Spotify and hired Mr. Iovine and Dr. Dre, who should help to improve the company's relations with the music industry.

"Given the cultural appeal that the Beats brand seems to have, I think it could give Apple a leg up to compete even harder for the streaming music audience," said Adam Shlachter, head of media activation for North America, DigitasLBI.

Beats Music poached its first CMO from PepsiCo just last month. Bozoma Saint John, who goes by "Boz," had been the head of Pepsi-Cola North America's Music and Entertainment Marketing group. She officially began her role as head of global marketing on April 14, reporting to Beats Music CEO Ian Rogers.

"It's an awesome opportunity to start with a brand that has equity already, but is on the runway to grow in this burgeoning space," Ms. Saint John said, at the time. "This is Day One, we're just starting off. … We're really going to do more of the same, just more of it. We'll start with all the partnerships that we already have."

Beats has kept advertisers locked out of its streaming music service. Instead of an ad-supported free tier, it requires people to pay $9.99 a month to listen to Beats Music. If iTunes Radio is any indication, Apple may want to keep it that way, at least at first.

ITunes Radio launched last fall with a handful of exclusive launch sponsors including Pepsi and Nissan. Early on advertisers were pleased with the results. However the honeymoon period didn't last long.

"ITunes Radio didn't generate the level of enthusiasm they would hope for and it's not offsetting streaming service momentum like Spotify," said MEC Managing Partner and Digital Lead Gian LaVecchia.

ITunes Radio has only been live for eight months, so it's probably too early too declare it a flop. But at least one launch advertiser has already decided to pull the plug.

"We had a client that was one of the early sponsors who didn't see the results they wanted and were able to get out of their deal early. Apple was very good about it," said Dave Martin, senior VP-media at Ignited.

Early on, Apple's ad sales team made a "fairly heavy push" in pitching media buyers on iTunes Radio, but have been relatively quiet of late, said one agency executive. "Pandora is in our office all the time talking about how many people are using their service. We're not getting the same kind of shouting from Apple about their audience," said another agency exec.

ITunes Radio's lack of traction to date "might temper expectations [for the potential of an ad-supported Beats Music]," said one media buyer.

But an ad-free Beats Music doesn't mean there isn't an opportunity for Apple to bring marketers into the fold. Apple could use its own and Mr. Iovine's and Dr. Dre's clout to bridge musicians and marketers, said UM Senior VP and Managing Partner-Digital Natalie Bokenham. Apple could pair artists and brands together to create songs specifically for the brand that could be listened to on Beats, sold on iTunes and, of course, aired in ads.

"The analogy with other media is original branded content. This would be original branded music," Ms. Bokenham said. She added, "I can't see Apple [buying Beats Music] so they can slap a banner ad next to a piece of music."