A correction has been appended to this article

NEW YORK (AdAge.com) -- At a time when many newsrooms are contracting or consolidating, the BBC is growing its editorial operations with an original news site aimed at the American audience. Launching Thursday, BBC.com will feature U.S.-focused articles on politics and general news to be produced by a staff of around 10 journalists based in the company's Washington bureau. BBC.com defaults viewers to BBC.co.uk, the U.K. home page, but will change over for the launch. 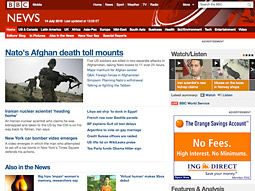 "We want to build on the momentum of our business," Miranda Cresswell, senior VP for BBC.com, explained about the enterprise. The BBC operates under a public trust, and its website cannot serve any advertising to computers based in the U.K.; readers outside of the Commonwealth, however, have been seeing ads for the past two years, most of which comes from the U.S. market. "We tripled ad revenue last year from the year before, and we plan on doubling this year," Ms. Cresswell said. "We were listening to what advertisers and the audience was telling us in terms of what they needed, and the launch of BBC.com is a response to those needs."

Indeed, this latest effort is part of the company's ambitions to nab more U.S. online media dollars, and the inception of BBC.com underscores the importance of original content to that strategy. BBC Worldwide, the commercial arm of the BBC, does not break out revenue figures by site, but the company's overall digital-media division reported a 9% increase in annual revenue of 30 million pounds, or $45.3 million. BBC.com represents a bulk of that amount, according to company insiders. The site draws 17.4 million U.S. readers, according to ComScore, compared with 57.8 million worldwide.

The editorial team will naturally be focused on political stories, but it will also tackle general news relevant to the U.S. audience, including sports and entertainment. The news team will be able to tap into BBC's global media presence: 72 bureaus with more than 250 reporters. Matthew Davis will serve as editor and Rome Hartman, who is executive producer of cable program BBC World News America, will oversee all editorial content coming out of the American news teams, from broadcast to online. As part of the company's plans to expand its North American operations, BBC.com plans to publish a travel section in August and will draw on content from Lonely Planet, a BBC-owned property that publishes a travel website and guidebooks. The travel section will be edited by edited by David G. Allan, a former NYTimes.com editor who worked on the travel section, and will feature original reporting from BBC reporters. Original news sections on entertainment and technology are being planned for the beginning of 2011.

"Given our presence around the world, we can provide a global perspective on U.S. stories," Ms. Cresswell said. "The American news team will draw on all our other reporters." As for advertising, BBC.com has already secured Hewlett-Packard as a launch partner, and the forthcoming travel section will feature airline Emirates as its sponsor. The site has an in-house sales team of 25 in Los Angeles, San Francisco, Chicago and New York. Ms. Cresswell said they are not selling to any advertising networks.

This is certainly not the BBC's first foray into the American media market. Cable channel BBC America has been airing BBC One and BBC Two rehashes on U.S. cable networks for more than 10 years, and it more recently began airing original content for American viewers, namely the news program BBC World News America. The cable channel banked $58 million in ad dollars for 2009, according to Kantar Media, a relatively small sum compared to other cable stations but it represented a banner year for the channel. The company recently hired former Nickelodeon President Herb Scannell to head up BBC Worldwide America.

BBC.com and BBC Worldwide America are wholly owned subsidiaries of BBC Worldwide, which recorded record annual revenue of 1.07 billion pounds, or $1.6 billion. Profits soared 36% to 145.2 million pounds, or $219.4 million. As the commercial arm of the BBC, Worldwide is able to make use of any content produced by the BBC, but it does not produce the content itself. In a therefore unusual arrangement, BBC.com's new roster of reporters in Washington is being entirely funded by BBC Worldwide, as opposed to the publicly financed BBC. This is not without precedent, as BBC World News America, which aired its first broadcast two years ago, is also backed and operated by Worldwide.

The BBC itself is a publicly funded organization that operates under a royal charter and is financed by a television license fee in the U.K. set annually by the government. Any British household that wants to receive a live-TV signal must pay the fee, currently set at 145.50 pounds for a color television, or just under $220, and 49 pounds for a black-and-white TV, or $74. The fees are used to fund content for BBC's TV, radio and online operations. BBC Worldwide does not receive any funds from the public fees, but is instead allowed to derive revenue from any of BBC's content, such as licensing fees for rebroadcast of BBC shows, DVD sales of those shows and ad sales for BBC.com. In what is a further complication around content ownership, the BBC World Service, a popular radiocast on world news, is funded directly by the British government, a legacy from the country's empire-building days when its far-flung citizens were without regular access to news.

Given the public ownership over much of the content, the company's business aims have sometimes been impeded or thwarted altogether by political pressures, but BBC.com and BBC World News America have been given a clear mandate to grow revenue amid sharp economic downturns in the media industry.

This article originally stated that David G. Allan was the travel editor of The New York Times, which is incorrect. In fact Mr. Allan was a NYTimes.com editor who worked on the travel section.