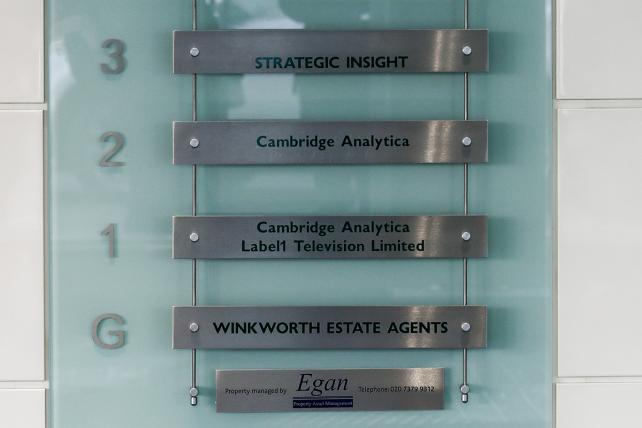 Labels list the occupants in the building that houses the offices of Cambridge Analytica in London.
Credit: Simon Dawson/Bloomberg

Cambridge Analytica, overwhelmed by a scandal over how it harvested data from Facebook to influence the last U.S. election, filed for bankruptcy in New York.

The American bankruptcy case could shed light on some of the company's relationships and finances, as U.S. legal proceedings are more transparent than those in the U.K., and creditors can use bankruptcy law to subpoena information and probe asset transfers. Cambridge Analytica, which did work for Trump's 2016 campaign, said in a May 2 statement on its website that it lost "virtually all" customers and suppliers as a result of reports that it improperly obtained information from tens of millions of Facebook Inc. users.

The company listed creditors including Facebook, Target and Google without specifying the size or type of claims they had. A spokesman for Facebook declined to comment and representatives for Google and Target didn't immediately return calls for comment.

Other data-analytics firms were also among creditors, including Datorama, a self-described global marketing intelligence company based in New York, and Media Analytics, a specialist in the Australian and U.S. retail industries. The filing also showed Datawatch Systems, in Maryland, which has technology to control building access, and Doximity Inc., a network for healthcare professionals.

Doximity, Datawatch and Media Analytics didn't return a message for comment, and Datorama couldn't be reached for comment.

Robert Mercer, who made his fortune as co-CEO of Renaissance Technologies, has been a financial backer of Cambridge Analytica, along with Steve Bannon and Breitbart News.

Emerdata Ltd., a London-based company formed in 2017, is listed as a direct owner of 89.5 percent of Cambridge Analytica LLC. Nigel Oakes, the founder of Cambridge Analytica's British affiliate, SCL Group, said earlier this month that Emerdata is also under court administration, refuting speculation that the consulting firm's operations would live on through new entities.

Other creditors listed in the filing include units of BlackBerry Ltd., Oracle Corp. and Comcast Corp. as well as the Federal Election Commission, the U.S. Securities and Exchange Commission and offices of the attorneys general in Connecticut, New Jersey and Massachusetts.

A whistle-blower from Cambridge Analytica set off a firestorm in March after he revealed how information was extracted from Facebook and used to influence voters. He testified before a U.K. parliamentary committee, describing the firm as one that dealt with illegal data and hacked material to win elections. He said Trump's victory was one of the reasons he blew the whistle. House Democrats who met with him in April called his information "disturbing."

Cambridge Analytica faces lawsuits in the U.S. over the Facebook data collection. One, for example, seeks class action status on behalf of all New York citizens who were Facebook members and whose information was obtained. They say they face ongoing damages because their private data is in the hands of the company.

Facebook also has been sued dozens of times itself over the data breach, and if it loses suits, could be expected to turn to Cambridge Analytica for damages. A Facebook spokesman declined to comment on the nature of its claim against the company, but said of the bankruptcy that "this doesn't change our commitment and determination to understand exactly what happened and make sure it doesn't happen again. We are continuing with our investigation in cooperation with the relevant authorities."

Cambridge Analytica said in its May 2 statement that it has "been the subject of numerous unfounded accusations" and that it has been vilified for activities that are not only legal, "but also widely accepted as a standard component of online advertising."

In March, footage emerged of the company's executives bragging about how prostitutes and former spies could be used to ensnare politicians and influence elections. One segment showed Chief Executive Officer Alexander Nix saying that Ukrainian girls "are very beautiful, I find that works very well." Nix in a BBC interview later said the allegations were "unfounded and extremely unfair."