Facebook Introduces Notify, a News App Designed to Make Your Other Notifications Obsolete 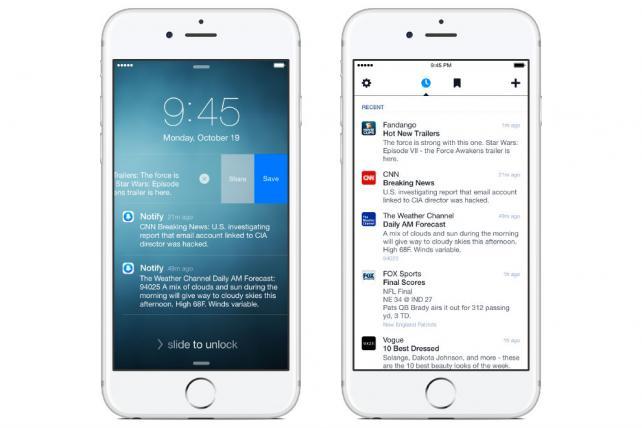 Facebook continues to put itself in the middle of anything you do on your phone. After looking to disintermediate texting and video-calling with Messenger, the mobile web with Instant Articles and even the home screen with Facebook Home, the social network is now looking to become your source for news, weather, sports scores and more.

On Wednesday, Facebook released an app for Apple's iPhones and iPads called Notify, which will alert users with information from media companies including CNN, The Weather Channel, Fox Sports and Fandango. Its notifications are similar to the ones many people already receive from the media companies' own mobile apps, but they are connected to people's Facebook accounts, meaning Facebook gets more information about its users' media consumption habits and interests.

Users could choose not to enable notifications, but that would negate a lot of the app's purpose. And they can decline to let the app monitor their location, but that could interfere with certain notifications such as nearby deals or weather updates.

The app asks users to pick at least three stations from which to receive notifications, using "stations" to refer to its media partners, which are organized into catergories including news, local, sports, business, entertainment, politics, science and technology, celebrity and gossip, music and audio, fashion and beauty, gaming, health, food and drink, and shopping and deals.

Notifications from the selected stations will appear in a reverse-chronological feed within the app that's not so different from the device's native notifications tab or even Facebook's news feed, except that it's tailored specifically to the news and information sources featured in the app. People will be able to bookmark notifications to check out later. And when they click on a notification, an in-app web browser opens up and loads the web page.

There are no financial arrangements between Facebook and the media companies participating in Notify, and Facebook has no immediate plans to allow advertising in the app, the spokeswoman said.

Publishers' calculations
Brands don't -- or at least don't yet -- have ways to advertise specifically to the people using the app, but the web pages that load within the app do carry the same ads they would carry if loaded in a normal web browser, so the app is still a moneymaking opportunity for publishers.

While Notify could reduce the need for people to install publishers' own apps or enable notifications from those apps, moreover, it could also help publishers get their content in front of those people since publishers' own apps typically aren't as popular or widely used as apps like Facebook's. People spend 84% of their time on phones with just five apps, excluding apps that come preinstalled, such as mail and calendar apps, according to Forrester. So piggybacking on Facebook's popularity could be a more successful way for publishers to gain share of that attention.

"Our readers are on Facebook, and we know that anytime Facebook comes out with a new product, they're going to be interested in it," said Callie Schweitzer, Time Inc.'s editorial director of audience strategy. "And it's also a huge potential source for us of new readers. For us the opportunity with Notify is really that it's not cannibalizing our current app audience because it's allowing us to reach so many new readers."

Time Inc. is running more than 45 stations within Notify across 11 of its publications, including Time, People, Sports Illustrated and Fortune. And it's using stations differently. Some, like Sports Illustrated's News and Rumors station, may push breaking-news notifications multiple times a day. Others such as Time's The Mission station, which documents astronaut Scott Kelly's year in space, will push notifications once a week, according to Ms. Schweitzer.

"As the world moves to be much more about distributed content and an ecosystem in which people are finding news in so many different places, it was such a great way to experiment with new ways to engage with our readers, particularly for brands that might not necessarily be thought of as breaking news, push notification type brands," Ms. Schweitzer said.

Mashable has created 10 stations for Notify in an attempt to broaden people's perception of the traditionally tech-heavy news site. "We worked on selecting subjects that might not be the standard of what a Facebook user would associate Mashable with," said Mashable's CMO Stacy Martinet. In addition to tech, those subjects span climate, cooking, the 2016 presidential election and tips on how to become an adult.