Facebook sees stories as the ad future and is schooling brands

Microsoft, Vogue among believers in the video ad format
READ THIS NEXT
The TikTok difference: Joining a genuine conversation vs. interrupting one 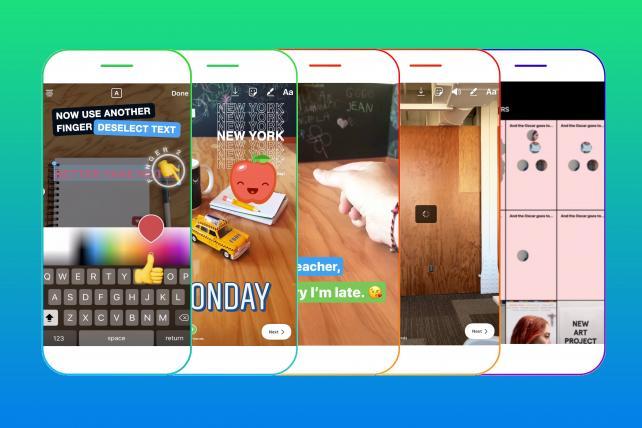 There's one room with a pond-sized ball pit, and another with a rainbow staircase. It's a true playground for the senses. And on one night in November, it also turned into a classroom for what Facebook calls "story school."

The social media behemoth brought in dozens of creative social media minds from agencies and brands to train them in the art of stories—the vertical video diaries designed for phones that disappear in 24-hours.

Snapchat may have invented the story, but Facebook made up for its lateness to the game by plastering the format all over its platform and staking the future of the company on this new style of video.

At The Color Factory, Grace Sun, creative strategist and the queen of stories from Facebook's Creative Shop, shows the classroom of Madison Avenue creative minds how to edit stories, use camera tricks like rewind and motion tracking, and play with colors and GIFs.

"We came into this Instagram Stories sprint, thinking that we were hot shit, like we know every single thing about this platform," says Devin Moore, marketing manager at Microsoft. Moore attended the story school session and also participated in what Facebook calls a "story sprint," to develop marketing for Xbox. The school is dedicated to creating stories for an Instagram or Facebook account, while the sprints are about creating ads.

Even though Xbox has been experimenting with stories since it first debuted on Instagram two years ago, there is always more to learn. "We have calls about stories a couple times a week," Moore says. "There are so many different nuances that are provided by the platform that it's impossible to know every single thing."

Like video ads, which Facebook introduced into its News Feed five years ago, the company has to teach brands and marketers how to create for a new era. CEO Mark Zuckerberg has called stories "the future of sharing." More than one billion people view stories on Facebook, Instagram, WhatsApp and Messenger every day. Stories will be the connective tissue in the next phase of Facebook's advertising platform, the first unified format that weaves across the four main properties.

Facebook's flagship app has seen its audience in North America and Europe plateau, and it has yet to generate money from WhatsApp, the messaging app with 1.5 billion users, many of whom are overseas. This year, Facebook will introduce story ads to WhatsApp, and the strategy is to make the platform seamless for brands to create the ads and run them on any of its apps.

Facebook even started reporting its user numbers across all its apps every quarter, a move that critics have said was a way to gloss over the flat growth on its main app by showing the total size of the audience. More than 2 billion people use the "family of apps" every day, the company says, while 1.5 billion use Facebook on its own.

In the third quarter last year, Zuckerberg discussed how Facebook is handling the transition from News Feed to stories and other video offerings like its YouTube competitor Watch. Stories present a number of challenges: if people watch more stories, that's fewer ads the company can show in the News Feed, which is the more lucrative front; and stories ads generate 20 percent less revenue than ads in News Feed, according to marketing technology and data firm 4C.

"I'm optimistic that we'll get ads in stories to perform as well as feed over time," Zuckerberg said in a call with Wall Street analysts last year. "And that the opportunity will be even bigger because it looks like stories will be a bigger medium than feed has been."

Speed is a factor

Another issue with stories is that they are consumed more quickly than the News Feed, where speed already presented a problem for advertisers, because people rapidly scroll past their messages.

These are the types of quirks that Facebook is trying to communicate to its advertisers with its story classes. The company plans to conduct more classes this week during the Consumer Electronics Show in Las Vegas.

Stories do solve two nagging problems in News Feed, where most videos play without sound, because people don't have their volume turned on, and the videos aren't guaranteed to capture the full attention of viewers. A video could be playing in the feed when it's only taking up half the screen.

In comparison, stories are viewed in full screen, and 60 percent are viewed with the sound on, according to Mark Rabkin, Facebook VP of ads and business platform.

"Stories are growing in a huge way and the creative formats there are diversifying," Rabkin says.

Advertisers like a Netflix, McDonald's, Nike, KFC and Volkswagen are already taking advantage of stories.

"We were there with stories at the outset, and we've seen them grow incredibly fast," Microsoft's Moore says. "We want to take up the full real estate of the screen that everybody is holding in their hands, and we want to make sure the creative that we build is fit for their hand."

This year, Vogue used Instagram stories to premiere its famed September Issue, releasing an early look at the Beyoncé cover and providing a link to Amazon to order a copy. Vogue sold out of the magazines it allocated for the campaign in one day, according to Negar Mohammadi, director of brand marketing at the publication. Instagram stories ads converted into sales at a 40 percent higher rate than other placements, Mohammadi says. Also, 20 percent of subscriptions last year were attributed to Instagram stories.

"People go to Instagram to get breaking news, and the immediacy aspect of it acts on people's nature to be impulsive," Mohammadi says. "The cover was not even on newsstands. Instagram was not only the first place to see it, people there were the first to order and guaranteed to be at their door before anyone else had it. That was the magic of this campaign."

Facebook stories best practices
Facebook hosts classes for agencies and brands to teach best practices for story ads. Here are some of the lessons: