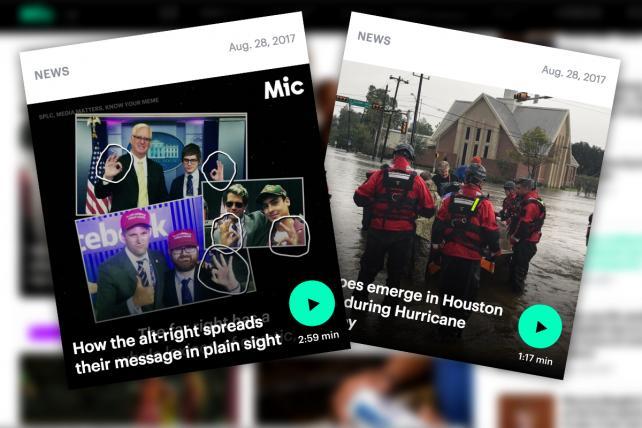 Mic, a website aimed at millennials, used to employ 40 writers and editors producing articles on topics like "celebrating beauty" and "strong women." Ten were let go this month, with most in the revamped newsroom of 63 now focused on making videos for places like Facebook.

Critics have called such moves "100 percent cynical" and out of sync with audience demand. Yet Americans are watching more video snippets online, either because they secretly like them or because they're getting harder to avoid. The growing audience for video, more valuable to advertisers than the space next to words, is causing websites to shift resources in what's become known across the industry as the pivot to video.

"When you think about how many hours people spend watching video versus reading, the audience has already spoken," said Chris Altchek, chief executive officer of Mic. The outlet's viewers spend 75 percent of their time with "visual" content like videos, not text, he said.

Americans are expected to spend 81 minutes a day watching digital video in 2019, up from 61 minutes in 2015, according to projections by research firm eMarketer. Time spent reading a newspaper is expected to drop to 13 minutes a day from 16 minutes during that time. The question is whether those trends will sustain the growing number of outlets flooding social networks with video clips.

"It's alarming," said Paul Verna, an analyst at the research firm eMarketer. "Publishers are throwing their hats into a ring that's unproven."

Mic, a New York-based news site founded in 2011, was just the latest to fire writers when it announced its pivot to video this month. Dozens of writers and editors have also been laid off this summer at news outlets like Vocativ, Fox Sports, Vice and MTV News. All of the moves were tied in part to focusing more resources on making videos.

Publishers are heading in this direction even though polls show consumers find video ads more irritating than TV commercials. Google and Apple Inc. are testing features that let you mute websites with auto-play videos or block them entirely. More young Americans prefer reading the news than watching it, according to a survey last year by the Pew Research Center.

But many publishers have little choice. Facebook Inc. and Google are vacuuming up the lion's share of digital ad dollars, forcing news sites to find other ways to make money. Some media outlets are focusing on subscriptions. Others are getting into e-commerce.

Those options, however, take time to bear fruit. Video provides a quick infusion of revenue because advertisers are clamoring for it.

"No site is 'pivoting to video' because of audience demand," Josh Marshall, publisher of Talking Points Memo, tweeted earlier this month. "They are pivoting to video because the industry is in the midst of a monetization crisis."

Advertisers are willing to pay more to have their messages in videos because they think it's harder for people to ignore them. Ad industry executives often refer to what's called "banner blindness," or web users who overlook banner ads at the top of websites.

Video ad rates vary depending on their format. But the spots can sell for as much as $27 per thousand impressions, while display ads -- think of the infamous belly fat ads -- can go for just 50 cents per thousand viewers or less, according to Brian Mandelbaum, CEO of Clearstream, which helps brands buy digital video advertising.

"Advertiser interest in video is insatiable," said Jason Kint, CEO of Digital Content Next, a trade association representing publishers such as the New York Times, Business Insider and Bloomberg. "Any CFO is going to say 'How can we get more video?'"

Many publishers are hoping to replicate the success of Vice Media, which started out as a magazine and now makes television programming, including a daily newscast for HBO and shows for its own cable network, Viceland. After getting a $450 million investment in June to make more video, Vice is said to be valued at $5.7 billion -- or twice the New York Times.

There's another reason why digital media companies are racing to churn out videos: they're trying to supply tech and media giants who are going after a piece of the $206 billion U.S. ad market.

Facebook, YouTube and Snap Inc. want publishers to make videos for their platforms so they can woo advertisers away from television. Publishers can't ignore them because they rely heavily on social networks for their audience. Mic, which gets about half its traffic from Facebook, is making more videos partly because it's Facebook's priority, Altchek said.

Meanwhile, media giants like Comcast Corp.'s NBCUniversal, Time Warner Inc. and Discovery Communications Inc. have invested millions of dollars in the same publishers. In April, for instance, Mic raised $21 million from investors including Time Warner, owner of CNN, TNT and HBO. By churning out more videos, digital media outlets give those TV networks that invested in them a younger audience to sell to advertisers.

"Those investments in a big way are driving the production of this video content," said Verna, the eMarketer analyst. In the tug of war between Silicon Valley and TV networks over advertisers, "some of the publishers are very much in the middle."