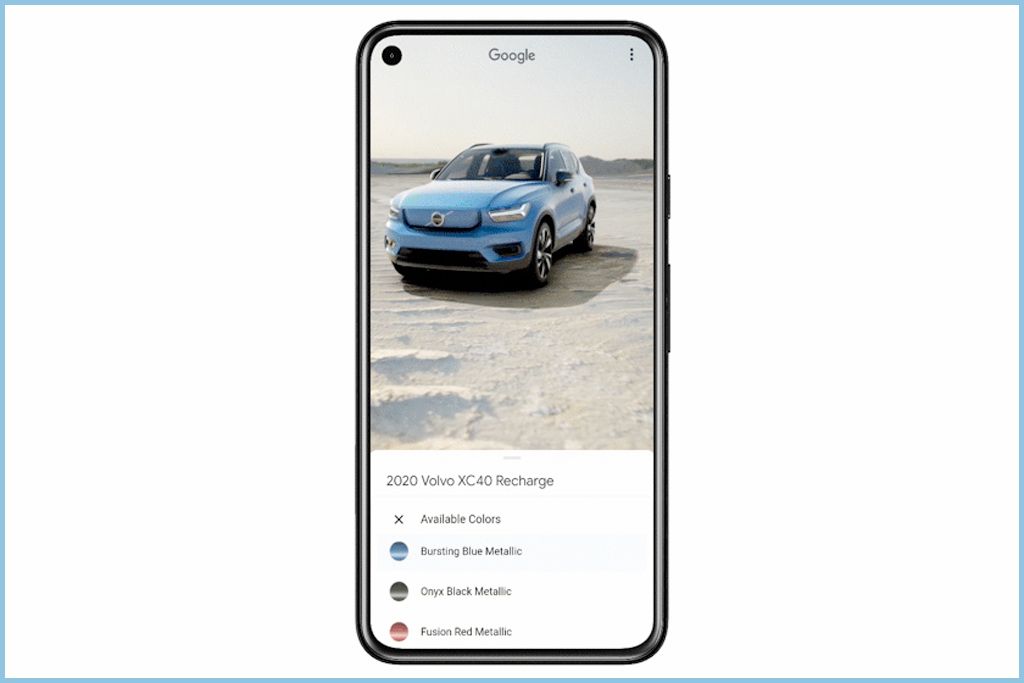 Volvo shoppers can try different colors on their AR car.

Google is putting augmented reality cars into search results, working first with Volvo and Porsche, to give automakers a way to market a digital version of their vehicles while buyers are less inclined to venture to the showroom floor.

On Thursday, Google rolled out updates to its platform, including the AR automobile feature, during its SearchOn event. It was one of Google’s more important shows of the year for revealing new products, since it canceled April’s Google I/O developer conference.

At last year’s I/O, Google introduced augmented reality into search for the first time, and now it’s adding brands to the feature. In this case, Google showed how a car company like Volvo could present a vehicle in 3D on people’s phones, allowing consumers to test different colors and see how it would look in their driveways.

“When you can’t go into stores to check out a product up close, AR can bring the showroom to you,” Google said in the announcement.

Automakers are looking for new ways to sell cars while consumers change their shopping patterns to adjust to social-distancing norms in the COVID-19 era. Car sales took a hit, especially in the early months of the pandemic, but this month there have been signs they are starting to pick up. Car sales rose 4.8% year over year in September, the first such increase since February, according to the Associated Press. Sales were down in total year over year in the third quarter, but were seen rebounding from the second quarter.

A recent survey from TrueCar, a digital car buying marketplace, found that 33% of shoppers reported visiting fewer dealerships during the pandemic. Meanwhile, 41% of car shoppers said they would be encouraged to work with car dealers that “allow them to configure their deal online.”

Enter Google, with a new way to check out cars virtually. Consumers can tour the vehicles in AR, and zoom in on the interior to reveal “intricate details like buttons on the dashboard,” Google said.

Augmented reality has become standard technology in phones, after it was first popularized by Snapchat, where consumers have played with AR filters in video selfies for years. Snapchat has also worked with automakers like BMW to design AR cars that render 3D in their ads.

Apple, Google, Amazon, Facebook and other platforms have been working on AR products, too. Apple’s latest iPhone 12, which launched on Tuesday, is equipped with a more-powerful sensor known as LiDAR, which improves the functionality of AR apps.

At its event, Google also announced new search capabilities that make it easier to shop with Google Lens. There was a demonstration showing how people can take a screenshot of a style of clothing found online and then click to search for similar items for sale.

In another demo, Google revealed “hum to search,” which claims to be able to listen to even an off-key hum from the user and find the right song.