Programs on YouTube, MySpace Plug Baby- and Body-Care Brands
READ THIS NEXT
What the TikTok ban means for brands

BATAVIA, Ohio (AdAge.com) -- Johnson & Johnson is venturing into social media to back its eponymous baby- and body-care brands, putting considerable star power behind pushes this month and next on YouTube and MySpace. 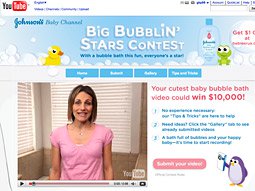 Moms who upload three-minute videos of their kids could win a grand prize of $10,000.
The company is launching a "Big Bubblin' Stars" contest on YouTube behind its recently launched bubble-bath product, offering a grand prize of $10,000 and a chance for the winner to become host of a channel launched in 2005. To enter the contest, moms upload three-minute videos of their kids.

Angie Harmon, star of "Samantha Who?" and "Law & Order," as well as a mother of three, will serve as spokeswoman and final judge for the contest. It's also backed by leading mommy blogger Christine Young of From Dates to Diapers and Walmart's Elevenmoms network. In addition, J&J has tapped hundreds of bloggers associated with Mom Central.

Raising money for charity
Johnson's Body Care, meanwhile, is using MySpace to enlist women to raise money for charities of their choice by hosting "cause parties" for which Johnson's will supply lotions and body washes for guests. Grammy-Award-winning singer Ashanti is fronting that effort, and has already hosted her own cause party in New York earlier this month to raise $10,000 for the Boys and Girls Club of Harlem.

In both efforts, J&J is leveraging hot marketing topics du jour: social media and recession. The social-media aspect is obvious. The recession aspect is a bit more subtle. The YouTube contest aims to provide new opportunities for moms to use social media to supplement their income. The MySpace program looks to let women who may be out of work remain active by volunteering for causes important to them and enable working women to help out charities whose coffers have been depleted by the recession.

Johnson's Body Care's MySpace page features Grammy-Award-winning singer Ashanti.
"Big Bubblin' Stars gives moms a chance to win some money with something they do all the time, which is take videos of their kids playing at bath time," said Rich Hildebrandt, group product director-new ventures for Johnson's.

The economic appeal isn't the primary element of the programs, he said, "but it's certainly something we think will resonate with moms and give us maybe the pass-along value." A lot of the initial interest in the program on Twitter or YouTube has been in the opportunity to host the channel, he said.

About engagement, not reach
Mr. Hildebrandt declined to disclose spending but said the goal of both programs is to deepen engagement rather than reach a maximum number of people. J&J will back the programs early next month with print and digital advertising and make extensive use of its BabyCenter site to promote its YouTube channel.

The body-care effort essentially makes MySpace host of the website for that part of the lineup during its restage this year. J&J opted for MySpace rather than Facebook because it was better suited for the effort, with more of an entertainment, gaming and beauty orientation, Mr. Hildebrandt said.

"Each of these open platforms has their own energy and role in women and moms' lives," he said. "MySpace is the best and most appropriate platform for us to celebrate beauty and a cause together with the overlay of Ashanti as the spokesperson."