As consumers grow more attached to their mobile phones and devices, marketers keep the cash flowing into app advertising.

Consumer in-app mobile use has increased in the past two years, a trend that is expected to continue, said eMarketer senior mobile analyst Cathy Boyle, adding that features such as mobile search and location-specific tech drove the increase in mobile ad spending. Marketers favor location-specific app ads because they can gather information about consumers more efficiently than traditional mobile web advertising. Additionally, Ms. Boyle said apps offer a native, more polished environment for ads. Embedded video can be developed for a certain game, for example, offering a more controlled environment for marketers and a more natural experience for users. 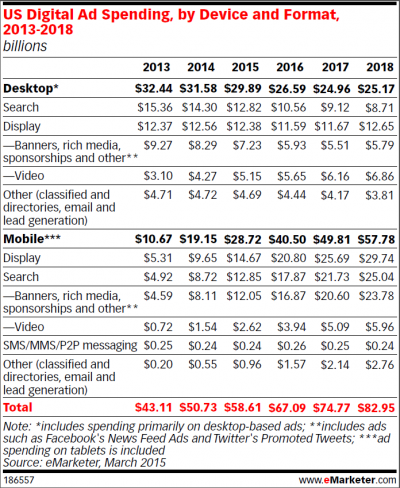 The usual advertising giants Google, Facebook and Twitter made the most mobile ad money, but Ms. Boyle added that there are a lot of new players in the mix. Newer companies include Pinterest, Instagram and Snapchat, all three of which premiered in-app advertising options recently. Instagram started its advertising component in late 2013, and Pinterest acquired ad tech startup Kosei after rolling out its "Promoted Pins" in 2014. This year, Snapchat made waves after introducing its "Discover" option—allowing sponsors to buy "Brand Stories."